The unemployment numbers released by the Department of Labor on Thursday morning are nothing short of cataclysmic. In the last two weeks, nearly ten million workers filed new unemployment claims.

There is no analogue in American history for workers losing jobs at this speed and magnitude. Before last month, the previous record in weekly new unemployment claims was in the recession of 1982, when just short of 700,000 workers filed. In the week beginning March 21, 3.3 million filed. Last week, it was 6.6 million.

The numbers also show that the devastation has not been confined to industries most directly affected by lockdowns and shelter in place orders, like hospitality and retail. Manufacturing employment is contracting sharply, and the situation in the sector is already resembling the depths of the Great Recession. White-collar employment is also feeling the pain, as law firms, real estate, and tech have all announced significant layoffs. 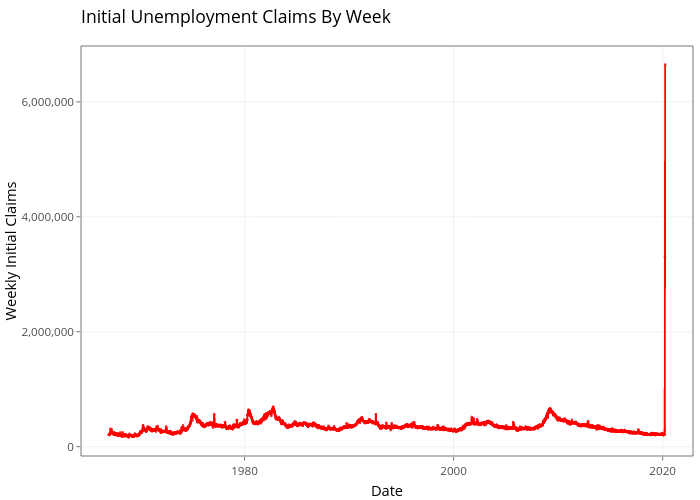 The effects of this will be dire. Immediately, workers and their families will lose income, and some will begin confronting the choice between food and rent. As households cut back on expenditures, the effects will ripple outwards, as other firms find their customer base shrinking.

But some of the most damaging effects of unemployment are longer-term. A mountain of academic research has found that unemployment carries consequences well beyond the immediate loss of income. Workers who are laid off are more likely to only find part-time work as a replacement. When they find a new job, their wages might be lower than their old job, or at the very least won’t rise as quickly. Economists call this effect “wage scarring,” and estimate that it lasts for decades. Over a lifetime, a worker who has been laid off will, even after they find a new job, earn roughly 20 percent less than a similar worker who wasn’t laid off.

Unequal to the Challenge

It doesn’t have to be like this. While an economic contraction as a result of the pandemic was probably inevitable, mass layoffs and the misery that they bring with them are not. As Emmanuel Saez and Gabriel Zucman recently pointed out, in Europe, the crisis isn’t taking the form of mass layoffs. Instead, states are paying companies to keep workers on payroll by subsidizing their salaries. This ensures that the workforce is ready to go back to work as soon as it is safe to do so.

Unfortunately, the United States stands out among advanced capitalist countries for possessing a welfare state that is uniquely unsuited to aiding workers in this crisis. The state is institutionally hostile to the kind of payroll replacement policies European states are adopting. With no kind of corporatist infrastructure that gives both labor and capital a place at the table in determining economic policy, the United States has little administrative capacity to enact solutions that both preserve firms institutionally and ensure that workers aren’t completely immiserated.

The welfare state that does exist is manifestly unequal to the challenge confronting it. The country’s largest antipoverty program is the Earned Income Tax Credit (EITC), which supplements the incomes of poor workers. However, the EITC is explicitly geared towards rewarding labor-force participation, so its benefits are tied to wages. It’s useless to people who are laid off.

Direct cash assistance, or welfare, has been missing in action since Bill Clinton’s 1996 Welfare Reform bill. Before then, about 70 percent of poor families with children received cash assistance. Today, the number is 22 percent.

Particularly concerning is the fact that the welfare rolls hardly increased during the last Great Recession a decade ago. Despite millions of people being plunged into poverty, welfare rolls hardly budged. In some states, where state governments slashed welfare spending, the rolls actually contracted as poverty grew.

Currently, the United States is relying on its unemployment insurance program to mitigate the effects of job loss. Unemployment benefits were significantly expanded for most workers (thanks in part to Bernie Sanders’s refusal to let the Senate to leave low-wage workers out in the cold) by the last stimulus bill, and eligibility for benefits was expanded as well.

While this will provide much-needed relief for workers whose paychecks stop coming in the next few weeks, it’s not nearly enough. For one thing, the sheer scale of new unemployment has overwhelmed the administrative capacities of unemployment offices. State unemployment websites are crashing, hotlines have all-day wait times, and offices can’t process claims fast enough. Our unemployment system is anemic and punitive at the best of times. Today, it is totally unequipped to punctually distribute the benefits that the state has designated as the main form of support for people caught in the economic maelstrom.

On top of this, because health insurance is linked to employment for most workers, millions of households are going to lose insurance coverage in the midst of a pandemic. Our health care system was already dysfunctional; now it’s on the brink of collapse, and months of lies about how wonderful a private insurance system is are unraveling in terrifyingly real time. Far from the greatest in the world, our system is one that is excluding people in massive numbers at the very moment that the private and public costs of doing so are highest.

American workers are now staring into the abyss. The current recession threatens to utterly dwarf the last in its magnitude. If it does, it will likely bring with it forms of political instability that will make the decade of Occupy Wall Street, Donald Trump, and Bernie Sanders look idyllic in comparison.