In the post-Occupy age, the Right has had two kinds of response to the unwelcome intrusion of class inequality into the public sphere. The first, seemingly preferred response is to simply deny that the ever-widening gap between those at the top of society and everyone else is a matter of any real concern. The economist Greg Mankiw became briefly infamous a decade ago for writing a response to Occupy arguing as much, and there has been no shortage of people presenting the same case more recently in regard to Bernie Sanders.

The plausibility of this argument, however, has only declined over the past ten years. As the gulf between rich and poor grows ever larger, ignoring the problem becomes less and less credible. Even the American Enterprise Institute, a high temple for worshiping the market, sounded the warning recently, suggesting that “Republicans need to consider how to position themselves in a universe in which more and more Americans believe the state must play a far greater role in mitigating both poverty and wealth disparity than in the past.”

All in the Family

The Right’s second kind of response to the problem of growing inequality has been most recently expressed by David Brooks. From his sinecure at the New York Times opinion page, Brooks’s role is to filter concern about inequality through a combination of WASPy moralism and conservative common sense. His latest piece, “Who Is Driving Inequality? You Are,” is a typical example of this method. Brooks argues that income inequality is indeed a moral problem in our society, but he tries to domesticate it politically with two contentions.

First, Brooks argues that a focus on those at the top of society is myopic. While the CEOs and hedge fund types are certainly making out well, it’s actually the gap between the top 20 percent and the bottom 80 percent that “is most glaring and most unjust.”

This argument follows from his second point, which is that inequality isn’t a consequence of the distribution of power in our society, but instead is generated by the quotidian decisions of middle-class families to provide their children with the best they can. In an economy that strongly rewards human capital, he argues, families that invest in their children’s education and development effectively ensure that opportunity won’t trickle down.

In other words, inequality is indeed a problem, but it’s not a problem of power. It’s a problem because some people (the top 20 percent) have families that set them up for success, while others (the bottom 80 percent) can’t seem to get it together.

Brooks’s argument is the intellectual equivalent of a tax haven. In his world, the gains of the ultrarich evaporate. Inequality isn’t the spectacle of the superrich competing over who has the most opulent yacht, but a house in a school district where everyone goes to college. The obscene levels of privilege and power that structure the lives of the most rich are hidden away, replaced by a picture of a comfortably middle-class life.

The outrageousness of Brooks’s sleight of hand becomes apparent at the slightest examination of the data on how inequality has developed. He’s right, of course, that the bottom 80 percent have lost ground over the last half century. In 1975, about 50 percent of all national income went to the bottom 80 percent, and by 2014, that had fallen to under 40 percent.

But the story of the top 20 percent is more complicated. Outside of the top 1 percent, there hasn’t been much change. In fact, all income brackets below the top 13 percent are taking home a smaller slice of the pie than in 1975. Even the almost rich, those in the ninety-eighth to ninety-ninth percentile, just below the 1 percent, only saw their share of national income increase from about 4.5 to 5.6 percent of the total.

All of the action is concentrated at the top. In 1975, the 1 percent took 10 percent of the total. Today, it’s around 20 percent. The story of American inequality is fundamentally a story about the rise of the 1 percent. 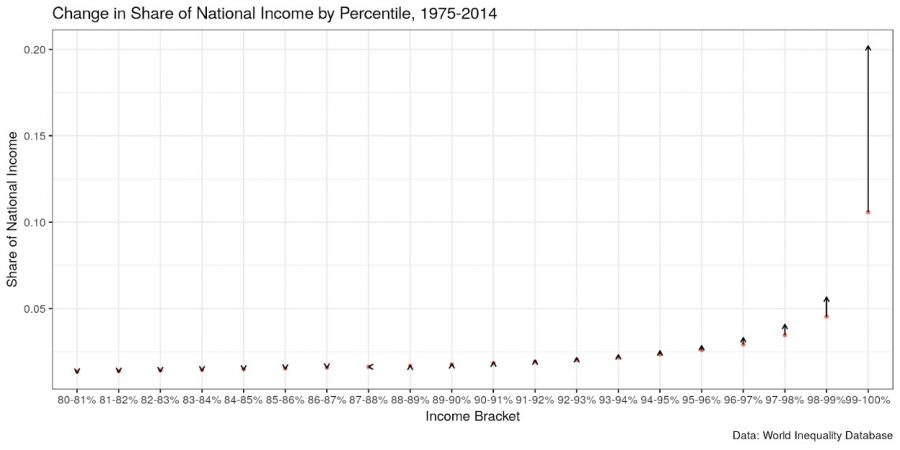 If Brooks were an accountant stashing his clients’ money in the Cayman Islands, however, he would certainly be getting a visit from the IRS, because he’s not particularly good at hiding the cash. At points in his piece, he lets the gap between the truly rich and the merely affluent slip through. For example, he notes that while in the 1960s, “profits per partner at elite law firms were less than five times a secretary’s salary,” today “they are over 40 times” as high.

Of course, partners at elite law firms aren’t representative of most people in the top 20 percent. In 2016, the median total compensation for a partner in a law firm was over half a million dollars, putting them comfortably inside the 1 percent.

Brooks’s example of partners at elite law firms also exposes how hollow his explanation of rising inequality is. While he indicts his readers with questions like, “Did you marry before having kids and raise your kids in a two-parent home?”, it’s pretty obvious that these dynamics do little to explain the rise in inequality. After all, that rise is visible in the way that the compensation for firm partners has far outpaced the compensation for, say, public defenders, when the family structures of the two groups are basically identical. Something else has to explain the gap between them.

Brooks focuses on the family, despite its obvious failure as an explanation, because doing so redirects attention from the power of the rich to the supposed defects of the poor. The gap between rich and poor has grown ever larger, according to Brooks, not because the rich have fought at every turn to expand it, but because the families of the poor, beset by divorce and single parenthood, can’t deliver their children the human capital necessary to succeed in a modern economy.

What’s missing from this story are the institutions that determine the balance of power between rich and poor. For example, last year, the trend in income inequality showed a slight dip, as the incomes of those on the bottom of the distribution rose ever so slightly more quickly than the incomes of those at the top. The cause wasn’t, of course, any change in family structure or human capital, but instead new minimum-wage laws going into effect in many states.

These kinds of institutions and policies are ultimately what explain the gap between rich and poor. That gap narrowed in the mid-twentieth century as institutions like unions constrained the power of the rich, both on the factory floor and in the statehouse. But as corporate America began its long union-busting crusade in the 1970s, this power was crushed, and inequality began to skyrocket.

As economic inequality continues to grow, Brooks’s strategy is likely to grow more popular with those hoping to discourage real attempts to remedy it. A world of ever-increasing opulence for the rich, and increasing desperation for the poor, is a world in which the argument that “inequality doesn’t matter” appeals to fewer and fewer people over time.

The recession detonated by the coronavirus pandemic will only accelerate this dynamic. While income inequality itself often contracts during a crisis, as the stock portfolios of the wealthy take a hit, inequality in lived circumstances explodes. Incomes for the rich might fall faster during a recession, but the gap between having to sell your summer home and being evicted from your only home is far larger.

The only solution is to rebuild the institutions that constrained capital’s power in the past. Brooks’s focus on the family deliberately distracts from this task.