Anyone who has spent any prolonged amount of time around young children might notice a stage around four or five years old when they fall deeply in love with the mail carrier. It’s not always the mail carrier. Bus drivers are also very popular, and I’ve heard of a few baristas who are visited daily by an adoring toddler. Among my favorite genre of cute YouTube videos — somewhere between “birds playing with cups” and “cat is best friends with . . . ” — is “kid loves sanitation workers.”

At the risk of ruining the preciousness, there is a developmental explanation for this apparent sweetness. Around that age, kids become aggregators, as opposed to atomizers. Their weird little brains are observing the people and places consistent to their routines — it’s how they learn to identify systems, networks, processes, and even social collaboration.

This is the appeal of the Busytown books by children’s author and illustrator Richard Scarry. The series features little bustling scenes of anthropomorphic cats, rabbits, hippos, lions, and other animals, all hard at work, keeping Busytown productive and strong. White-collar jobs like doctor, nurse, teacher, reporter, and engineer are featured alongside housepainters, carpenters, farmers, coal miners, and lumberjacks, and even children doing household chores.

The first lines of 1968’s “What Do People Do All Day” say it all: “We all live in Busytown and we are all workers. We work hard so that there will be enough food and houses and clothing for our families.” The sheer number of jobs featured in Busytown paints a picture of a vibrant, organized society of happy citizens and healthy families: taxi drivers, stay-at-home parents, grocers, musicians, train porters, factory workers, barbers, doormen, flight attendants, heavy equipment operators, delivery people, street cleaners — every job featured is essential, and all are treated with dignity, because it takes all sorts of work to make Busytown run.

But how would Busytown vote? Thanks to data analyst David Waldron, we can venture a guess based on occupational donation patterns.

We all know Bernie takes a strong lead in donors overall, receiving 27.2 percent of all donations to a primary candidate as of last month — that’s more than double the number of donations to the second-place donation recipient, Pete Buttigieg, who is neck and neck with Warren at 12.5 and 12.4 percent, respectively. (Bernie has over three times the number of donors as Biden, who is in fourth.)

And where do all those famous Bernie small donations come from?

Well, the mailman loves Bernie — both letter carriers and post office clerks are very aboard the Bernie train.

If your job involves a lot of abuse from the public, you’re more likely to be a Bernie Bro — call-center customer-service representatives love Bernie, at 44.7 percent, and 45.8 percent of retail associates donors are for Bernie — that’s the most common job in America, folks!

In fact, Bernie’s biggest donors by profession are teachers, nurses, farmers, truckers, servers, construction workers, and students. At first glance, these jobs don’t appear to have a lot in common, but they’re all essential parts of a functioning society that often go underpaid and underappreciated (some heavily unionized, some not at all). Bakers, butchers, couriers, baristas, 911 dispatchers, forklift operators, and, of course, bartenders all spend their hard-earned cash on Bernie more than any other candidate, and he has the strongest (and starkest) support among low-wage workers. 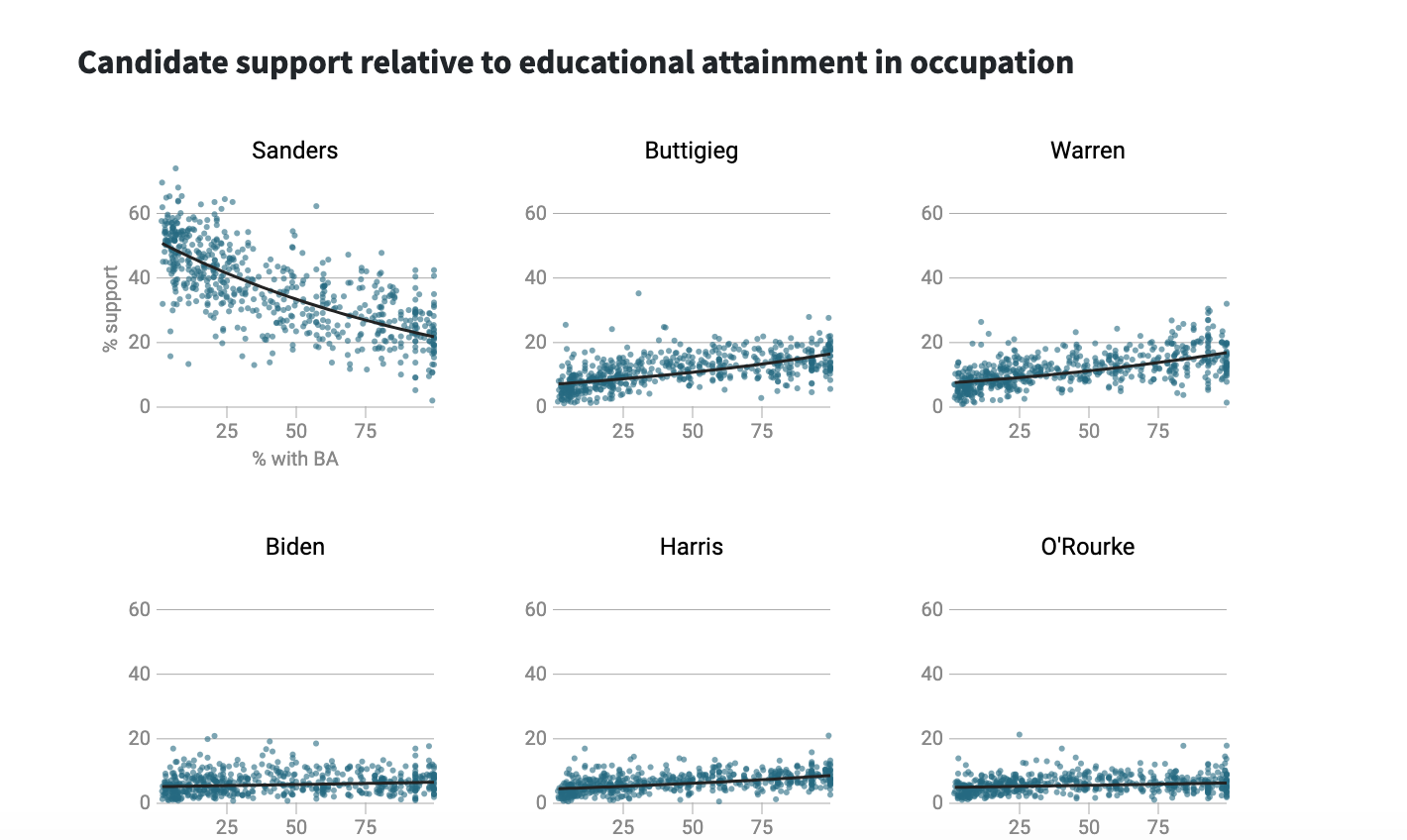 As Matt Karp noted, Bernie wipes the floor with Biden and Warren on Busytown jobs. 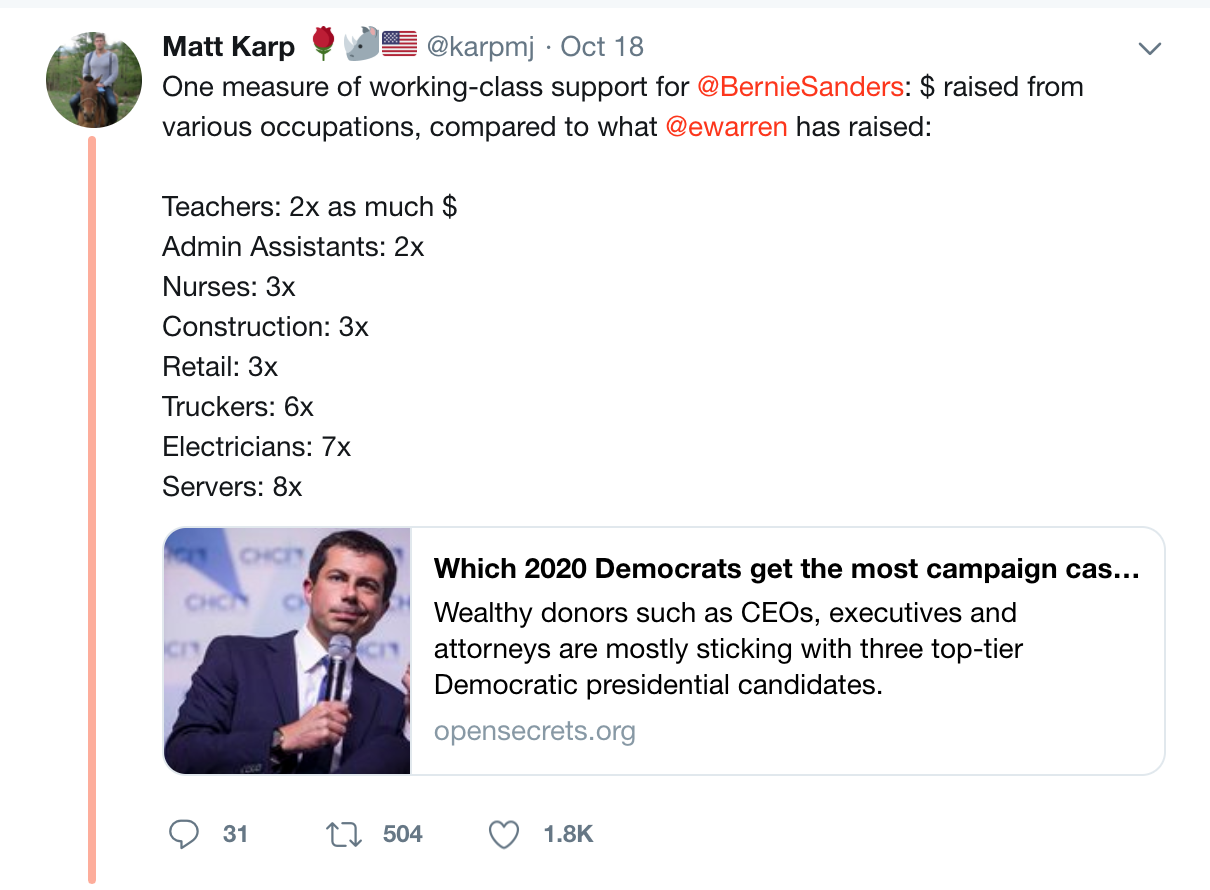 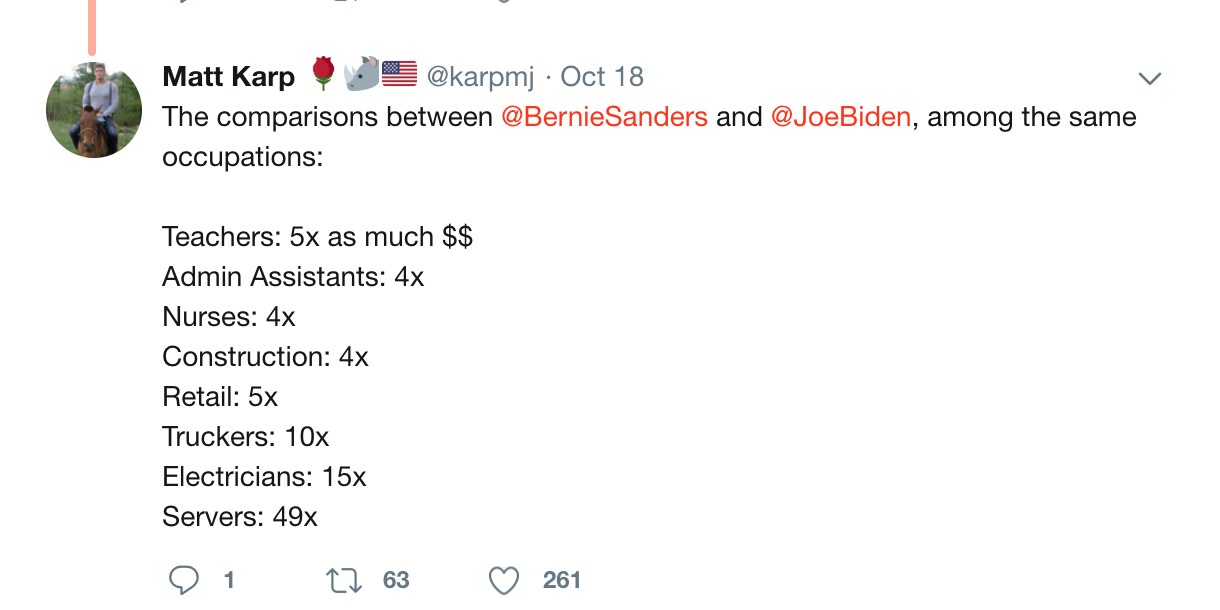 So, who doesn’t much like Sanders? Warren is neck and neck with Bernie for grad students, though his 22.8 percent still barely beats her 21.4 percent. She does, however, attract those horny-handed sons of toil, the mathematicians, archivists, librarians, historians, proofreaders, copy markers, and survey researchers.

However even this data is slightly misleading as to how much support Bernie actually has. For example, while it’s true that librarians donate more to Warren than Sanders, librarian clerks and aides — the subordinates working under the cruel whip of those tyrannical book barons (oh, they may seem like a pair of cat-eye glasses and a messy bun away from wild abandon, but mark my words, they’re all authoritarian despots) — are majority donating to Bernie, with 35.4 percent to Warren’s 18.1 percent.

Busytown is for Bernie, because Bernie is the working-class candidate. I don’t say this as some “mouths of babes” idealism about the innocent brilliance of children — they also love “Baby Shark,” shoes that light up, and they will drink laundry detergent if you don’t watch them closely enough. But the ability to view the world socially, as a machine that only functions as a product of labor, it isn’t even elementary — it’s literally preschool.

The truth is that even as automation lurches on, the working world is not heavily comprised of “Bullshit Jobs.” It actually has a lot of the same jobs it has had since industrialization, even factoring for technological advances and ridiculous and arbitrary levels of professionalization (I always find it strange to think that Woody Guthrie was a sign painter, mainly because it’s difficult to imagine a time when freelance graphic designers weren’t expected to have college — or even high school — degrees).

Busytown is a workers’ town, and the workers know that Bernie is the only candidate that’s working for them.