Many liberals (and even Bernie Sanders) responded by citing the steep marginal tax rates of the 1950s. How could a 70 percent levy be radical, they retorted, when Dwight Eisenhower presided over a 91 percent rate?

It’s a cute line to troll the Right, but it’s fundamentally ahistorical.

Treating a tax hike on the rich as a Happy Days restoration overestimates the amount of taxes rich people actually paid, and implicitly whitewashes a period of anti-communist military budgeting whose minimal domestic spending mostly furthered the racial divide in our nation, while minimizing the resistance a 70 percent rate would face.

Steep taxes on the super-wealthy would be profoundly transformative, particularly if combined with higher capital gains and corporate taxes. But they will take serious class struggle to win.

The Rich Have Never Paid That Much in Income Taxes

Long-term tax comparisons are challenging. The IRS has periodically altered its definitions of “income,” and the ability and inclination of the wealthy to hide income from tax authorities has shifted over the years. That said, it’s clear that the rich today are paying only slightly less in income taxes than they did in the Eisenhower era.

The high point of taxation on the wealthy came during World War II, when the IRS reported (in 1943) that the wealthiest 0.2 percent of Americans were forking over a full 49.3 percent of their reported income just in income taxes. This fell to a little over 31 percent by 1949, then briefly spiked up to 35 percent in 1950 to pay for the Korean War. By 1960, despite official top marginal tax rates of 91 percent, the richest Americans were paying only 31 percent of their income in income taxes. Aided by tax shelters, rich people were making a mockery of the nominal rates.

Compare that to the last couple decades. In 2004, following the Bush tax cuts, the richest Americans were on the hook for an average rate of 25 percent in income taxes. With the Obama tax hikes, that inched up to 26 percent — still not much below the rates of the Eisenhower years.

To be clear, the federal government did collect more in taxes from the rich in the 1950s. But this was due to corporate and estate taxes, which corporations and the rich were less able to avoid (say, by shuffling assets among international subsidiaries to cut reported profits). With the advent of the neoliberal era, rich people found it much easier to hide earnings of all sorts. As the economists Thomas Piketty, Emmanuel Saez, and Gabriel Zucman have argued, the rise in income that is not legally subject to income (and particularly corporate) taxes is a critical part of the trend of rising untaxed wealth by the elite.

And regarding Great Depression tax nostalgia: the wealthy paid a lot less in federal income taxes then than now; the IRS calculated that the top 0.2 percent of Americans paid only 20 percent of their income in income taxes in 1940. New Deal programs were in fact heavily funded by regressive excise taxes on alcohol, gasoline, and electricity, which supplied more than double the federal revenue compared to the income tax back then.

However, at least the revenue collected in the 1930s was largely going to domestic spending.

Those 91 percent top marginal tax rates of the Eisenhower years, on the other hand, paid mostly for Cold War (and occasional covert hot war) military spending, not for domestic needs. Much of Truman’s budget in 1952 was still footing the bill for the Korean War, and even as late as JFK and LBJ, half the federal budget still went to military spending.

If American elites tolerated a higher level of taxation in the 1940s and 1950s, it was largely because they feared that first fascism and then communism — or even just simple democratic victories in places like Iran or Guatemala — would threaten their long-term wealth. Funding a large-scale military presence around the world was in their financial self-interest. As business leader and publisher Henry Luce would write in his famed “American Century” article, support for US international strength was needed to ensure that a “system of free economic enterprise” would “prevail in this century.” 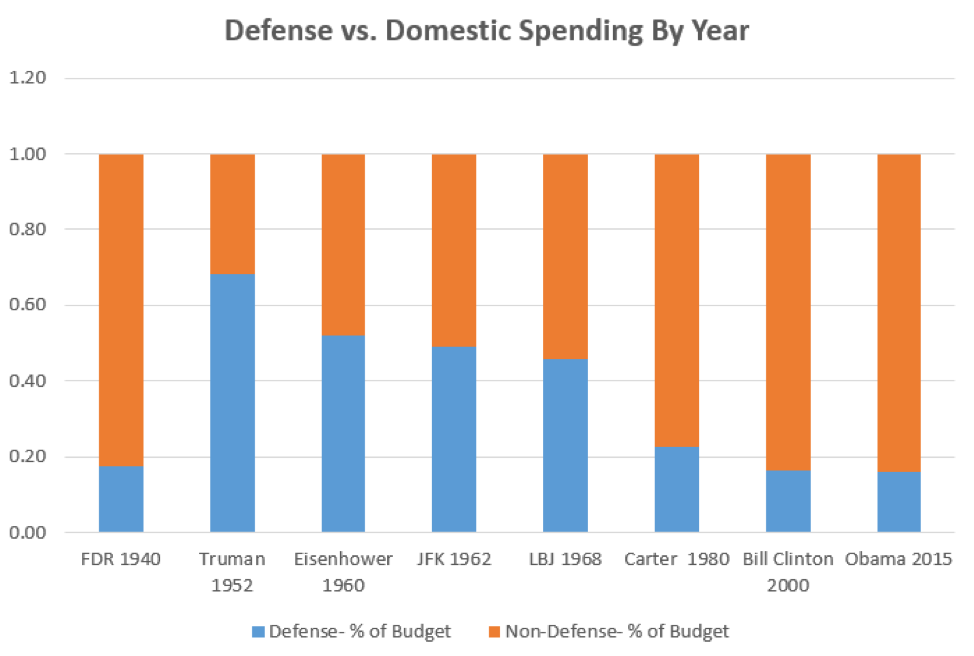 As the Vietnam War ended, domestic spending became a solid majority of federal spending for the first time since the Great Depression, yet it was only with the end of the Cold War that military spending as a percentage of the budget returned to pre–World War II levels.

If the measure is what percentage of the income of the wealthy is being taxed to pay for domestic needs, rather than just to fund the military, modern tax and budget policies are actually more progressive than during the 1950s Cold War era.

The 1950s Should Evoke Little Nostalgia

Domestic spending in the 1950s was not just a small part of the budget — much of what was spent funded the suburban sprawl that ultimately fueled both climate change and post–Jim Crow segregation.

Following the Federal Aid Highway Act of 1956, federal outlays on highways as a percentage of GDP surged to levels double those of today, driving the first reversal in urbanization in the country’s history. Largely left behind were black families, who saw jobs follow the highways out of the cities. Racism in the mortgage markets prevented them from pursuing those jobs or participating in the wealth escalator of suburban homeownership, which federal policy explicitly supported through the Federal Housing Administration’s refusal to subsidize mortgages to African Americans trying to move to “white” neighborhoods.

Even the GI Bill largely left out black veterans. While many black veterans did get the chance to go to college, the GI Bill funding for veterans’ mortgages and small business loans were essentially a whites-only program. “The GI Bill helped foster a long-term boom in white wealth,” writes David Callahan, “but did almost nothing to help blacks to build wealth. We are still living with the effects of that exclusion today.”

Ultimately, support for higher taxation on the wealthy in the 1950s was bolstered by elites’ fear of global “communist” threats and racist appeals to white voters that more government spending would benefit them above all.

When the Great Society and other programs began incorporating those excluded from the 1950s spending, the New Right wing of the elite seized on it to promote a backlash against taxation. Kevin Phillips, who mapped out Richard Nixon’s “southern strategy,” argued the goal was to convince white voters that Democrats were funding programs “like ‘welfare’ that taxed the many for the few.”

Having white voters identify not as workers or citizens but as “taxpayers” allied with the wealthy was the core of that strategy. And it succeeded to an extent — even though the largest expansions of spending in the 1960s and 1970s went to the new Medicare program and increased Social Security benefits, which delivered huge benefits not just to people of color, but to white families.

Given that income taxes collected from the rich are not much lower than in the 1950s, and given that there are still broad unmet needs in society that progressives want to fund, the real goal is to raise effective income tax rates on the rich far higher than back in the 1950s. Rhetorical references to the past aside, we are in completely uncharted waters. Progressives and socialists are fooling themselves if they pretend raising taxes on the wealthy won’t require intense class struggle. It wasn’t somehow won in the 1950s, then fumbled away — it never really happened.

Today, we have to promote taxing the rich without even the grudging support of some sectors of the wealthy. Instead, we have a mobilized class of billionaires eager to throw around their political weight. Democratic donor and former Starbucks CEO Howard Schultz briefly launched a third-party exploratory campaign for president just because he thinks too many Democrats are talking about raising marginal tax rates.

But here’s the good news. If tax rates on the wealthy had actually been high in the 1950s, the public squalor and the depths of poverty then would be depressing beyond belief. Progressives can take pride that in the face of corporate-funded New Right attacks, the country in the last sixty years has shifted federal spending from mostly Cold War militarism to predominantly domestic spending on a far more racially inclusive welfare state.

That success has not stopped growing economic inequality. But precisely because of the wealth now held by the elite, increasing taxes on the rich would deliver stupendously large revenue to the government. Accounting for income not usually reported to the IRS, Piketty, Saez, and Zucman estimate that the top 0.1 percent of adults — who make an average of $6 million annually — collectively held $1.4 trillion in wage and capital income in 2014.

A tax hike as modest as 10 percent on that group could yield $140 billion more per year for social needs, and anything on the order of AOC’s 70 percent tax on all their income could cover most, if not all, additional government costs to implement Medicare for All or a Green New Deal. Expand effective tax rates on the larger number of those in the top 1 percent of taxpayers — those averaging $1.3 million in income per year — and we’d have trillions of dollars over the next decade to upgrade infrastructure, build affordable housing, improve transit, and guarantee jobs for the unemployed.

Higher taxes are also enormously popular. Polls show nearly 60 percent of the population supporting Ocasio-Cortez’s proposal of a top 70 percent tax bracket, with the post-boomers who have no memory of the 1950s even more supportive of taxing the wealthy than the boomers.

Still, we need to be up-front that promoting significant redistribution through steep taxes on the rich is a fundamentally new political task. Shout-outs to the nominal tax rates of the 1950s may be a nice rhetorical move. But they mislead us into thinking the 1 percent won’t fight like hell to keep their money — just as they always have.