Stirred to action by the New York Times’s excellent recent piece about Denmark’s high fast-food wages — which are maintained by the power of the United Federation of Danish Workers — Yglesias responded with an article headlined, “$20 an hour minimum wage really would cost a lot of people their jobs.” The sage of Vox believed he had spotted “the crucial fact buried in the twenty-ninth paragraph of the article”: namely, that McDonald’s has far fewer restaurants in Denmark (relative to population) than we do in the US.

Conclusion? “Mandating high wages for fast food workers has more or less the impact you would expect — low levels of fast food employment.” (But also this ass-covering sentence: “Obviously this is not a slam-dunk proof that forcing US McDonaldses to pay Danish wages would lead to the closure of two-thirds of the McDonald’s restaurants in the country.”)

But can you really reach that conclusion from a single data point? Is this data journalism?

The Times drew on research by Orley Ashenfelter and Stepan Jurajda, who gathered figures on McDonald’s wages in a number of different countries. As it happens, I noticed the study last year, and decided to look into exactly this question — that is, how the wage levels they found relate to the number of McDonald’s in each country. It took me a couple hours. Since Vox is so fond of cheap labor, I’m offering my findings free of charge if they want to use them.

Ashenfelter and Jurajda calculated the “McWage” for a large number of countries: the gross hourly wage in 2007 for McDonald’s crew workers, not including benefits or employer taxes. Unfortunately, they haven’t yet reported the actual numbers in tabular form. They only show each country’s McWage as a percentage of the US McWage, and you have to read the figures off their graph, which can be found on page thirty-one of this, or page twenty of this.

Fortunately, this doesn’t present much of an obstacle. (As for the number of McDonald’s restaurants in each country, you can find those numbers for Europe here [page six]. Numbers for other countries are reported on the websites of the various national affiliates of McDonald’s.)

OK, how do the numbers compare? Here’s a graph: 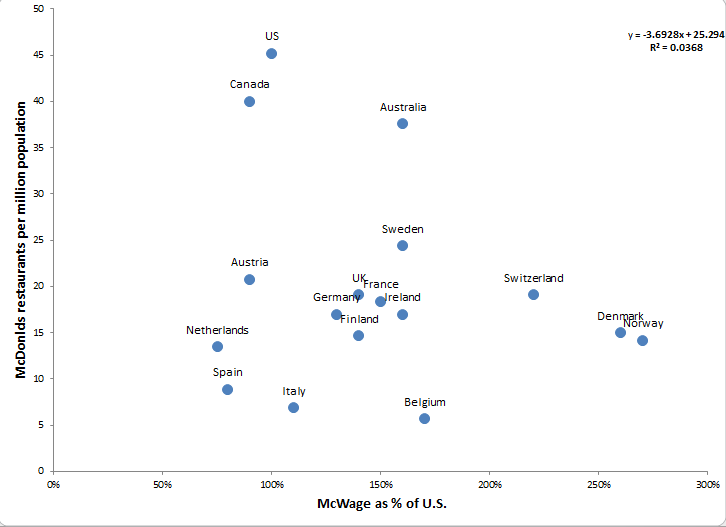 I’ll just point out the obvious. There is no relationship.

Now let’s try to put some dollar figures on this. Assume that the US McWage was $7.93 in 2007. (That was the highest state minimum wage in the country at the time: Washington state). Then the dollar figures would look like this: 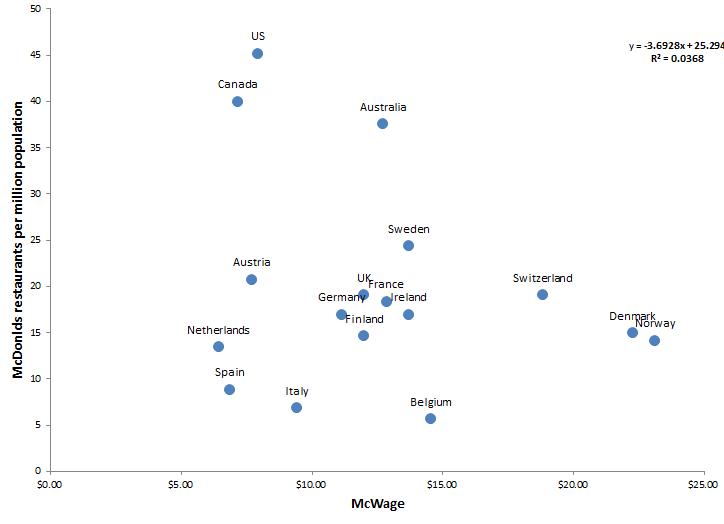 So, no. A living wage for unskilled workers is no disaster. It certainly seems to be working out at Vox.