The other day, Matt Yglesias put up a blog post that begins:

Without appropriate peg, here’s my big hazy generalization about what the left gets wrong about the economy.

Now, right away I know what you’re thinking: IGNORE IT, IT’S A TROLL. And obviously I know that. As the old saying goes, ask not for whom Yggy trolls, he trolls for thee. So I decided to ignore it.

But then I got an email from a friend asking me to blog a response to the troll. And with that, all the internal psychic resistance I’d built up just collapsed. So here I am, the fool, the chump, the sucker, falling for a Matt Yglesias troll. Of course I’m ashamed, of course I’m embarrassed. But Yglesias is wrong on the internet. I can’t help myself.

Here’s what he writes:

The left is rightly concerned about the real wages and incomes of ordinary working people. But the left fallaciously analogizes from a bargaining dynamic at a single firm to the entire economy.

The way a given worker or class of workers improves his real wages is by persuading his boss to give him a nominal raise that outpaces the growth in the cost of living. But the way the economy as a whole works is that my income is your cost of living. If Slate doubled my salary, I’d be thrilled. But if everyone’s boss doubled everyone’s salary starting on Monday, we’d just have one-off inflation. As it happens, a little inflation would do the macroeconomy some good at the moment. But the point still holds that while “you get a raise” is the way to raise your living standards, “everyone gets a raise” is not the way to raise everyone‘s living standards.

To raise real wages across the economy rather than for some favored group of insiders, what you need to do is make things cheaper. And that generally entails an accumulated series of events that make selected groups of people’s nominal incomes lower. If everyone could be chauffered around cheaply by autonomous cars, then the people who currently earn a living driving cabs and buses and trucks will lose out. If computers take over routine diagnostic work, then doctors will lose out. If online courses that serve tens of thousands of students displace community colleges, then community college instructors will lose out. . . . [But] cheaper health care and college and better transportation is a raise for every janitor, short-order cook, yoga instructor, and nurse in America.

So let’s consider this. Yglesias poses two scenarios. In Scenario One, everyone’s wages double, yielding only a pointless burst of inflation. This is the wrong way to go about increasing “the real wages and incomes of ordinary working people.” In Scenario Two, labor-saving technology causes people to be laid off, but lowers prices for everyone. This is the right way to go about things. Conclusion: we’re better off having prices go down than seeing wages go up.

Now, since Yglesias is wrong in an obvious way, this blog post will be tedious, an exercise in obviousness. I warn you: there’s no particularly interesting point to make here. Here I am, the sucker, being manipulated into writing things that are even more boring than I would otherwise write. With that in mind, I ask you, reader, to read no further. This is between me and my inner troll magnet, and I’d prefer you didn’t see it. Please click close tab now. Thank you.

So let’s start with Scenario One. It’s puzzling: Yglesias says he’s trying to figure out how to raise the incomes of “ordinary working people.” So why does he pose a scenario in which everyone’s wages double? That really does sound pointless.

Why don’t we instead consider a scenario in which only the wages of the “ordinary working people” double? For convenience’s sake, let’s identify these salt of the earth types as the roughly 70% of the private workforce that the Bureau of Labor Statistics calls “production and nonsupervisory workers.” That’s a mouthful, so we’ll just call them Ordinary Workers. As for the other 30%, this is a meritocracy, so we’ll refer to them as the Truly Gifted.

According to the BLS, last month Ordinary Workers made up 69% of the private workforce and collected 57% of private earnings. By highly advanced mathematical techniques, we can calculate that the Truly Gifted worker earned roughly 1.7 times the Ordinary Worker, on average – in other words, 70% more. (He or she also worked an average of 7% more hours, but we’ll ignore that for now.)

So what would happen if we tweaked Yglesias’s Scenario One so that it was only the Ordinary Workers who saw their wages double, instead of everybody? Well, as Yglesias says, it would lead to some inflation. (A lot actually.) But since this is a thought experiment, we’ll assume that ceteris is paribus: at the end of the process, the price level is higher but real production is no less and no more than it was before. All that’s changed is that nominal wages have doubled for everyone except the Truly Gifted. What would the result be?

The result would be a change in the income distribution. Whereas the Truly Gifted previously collected 43% of private earnings, now they take home only 28%. That leaves 72% for the Ordinary, instead of the 57% they collected before. Sophisticated mathematical analysis reveals that the Ordinary have just increased their real wages by 26%. Voilà: “the real wages and incomes of ordinary working people” have been lifted. And it was so easy – we just had to double their wages and then do some math.

Let’s move on to Scenario Two, Yglesias’s sensible solution. In this version, bus drivers are laid off and replaced by autonomous cars, allowing the price of transport to fall. Community college instructors are laid off and replaced by online courses, allowing the price of college credits to fall. Falling prices, in turn, boost the purchasing power of everyone’s wages. Hence real wages rise for everyone. Obviously, this is not a revolutionary concept: it’s called productivity growth. In fact, we don’t have to use our imagination to envisage how it might work: it’s going on around us all the time.

So how’s it been working out? Has productivity growth increased “the real wages and incomes of ordinary working people,” like Yglesias says it would? Well, I’m sure he’s already seen charts like this: 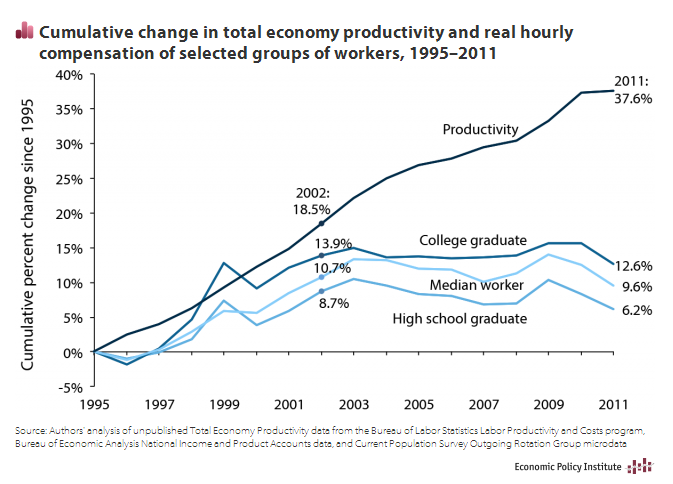 Curious. Tens of millions of layoffs took place during this chart’s time period – many of them undoubtedly carried out in order to introduce labor-saving technology, just as Yglesias advocates in Scenario Two. And it worked: productivity did actually rise – by 38%. In other words, we are already living in a Scenario Two world.

In fact, according to these numbers, the typical worker actually would have been twice as well off in a world with half as much productivity growth, but without the upward change in the income distribution.

But what would happen if we relaxed Assumption #1? That would seem to better reflect empirical reality, because it turns out that in real life some people’s wages go up (or down) relative to other people’s wages. What causes all those ups and downs? Let’s not get into that here. Let’s just ask what’s likely to happen to the bus driver’s relative wage after autonomous cars are introduced? Or the community college instructor’s relative wage after MOOCs are mooted? It doesn’t seem to bode well.

Yglesias admits that his thought-process was a “hazy generalization.” But it’s hard to see the insight through the haze.

But of course, the joke is on me. Right now, Yglesias is probably at some DC bar with Dave Weigel, LMAO-ing as he reads this on his phone. I fell for the troll. And by writing it for free on the internet, I probably made somebody’s wages go down.