Last summer, Bernie Sanders’s YouTube channel released a short clip entitled simply “Oligarchy or democracy?” Featuring compiled footage spanning Sanders’s career in both the House and Senate, the clip opens with the simple declaration, “Those who have the money have the power.” It’s a simple, and in many ways obvious truth. But it’s also one that sometimes gets ignored or marginalized in mainstream discourse about democracy. Threats to democracy, of course, don’t always directly involve questions of money or wealth. From attacks on voting rights to political institutions designed to protect minority rule, racism is a major factor as well. But, between dark money and unrestrained campaign donations, the noxious imprint of concentrated wealth is rarely far from sight.

That reality is difficult to ignore when you examine the obscene way that America’s collective wealth has come to be distributed. This maldistribution was incidentally the subject of a recent report requested by Sanders from the nonpartisan Congressional Budget Office (CBO), which found that wealth has continued to flow upward to an increasingly tiny number of well-off Americans.

Between 1989 to 2019, the CBO reports, the total real wealth (adjusted for inflation) held by all families in the United States tripled from $38 trillion in 2019 dollars to $115 trillion — or about five times the national GDP. The fruits of that growth, however, have accrued heavily to those at the top. As of 2019, the richest 10 percent of families held an astonishing 72 percent of this wealth, while those in the top 1 percent held more than one-third. The appalling asymmetry of these developments is underscored even more strongly by the CBO’s findings vis-à-vis the bottom half of all American families — who now hold a mere 2 percent of the country’s total wealth. There is a strong racial bias as well, with the median wealth of white families considerably higher than that of black or hispanic ones. 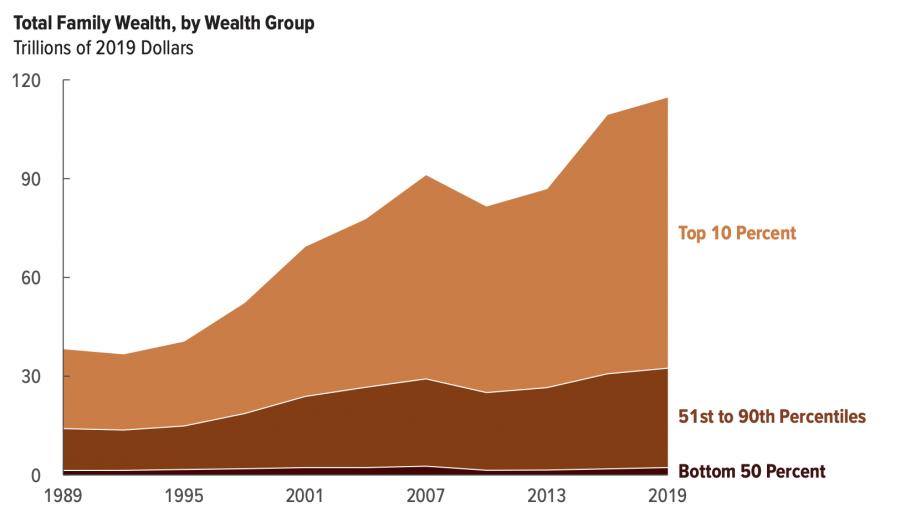 The political implications of concentrated wealth, needless to say, are often hiding in plain sight. Those who have the money, as Sanders often says, also tend to have the power. This applies in the obvious and direct sense that wealthy people wield not just their individual votes but also a greater means to influence the political process, make legislation more favorable, and fund political campaigns in a self-interested way.

But it’s ultimately the case that concentrated wealth threatens democracy regardless of whether such avenues legally exist for the rich to influence political life or not. For basic moral reasons, America’s current wealth distribution would not suddenly become acceptable if the top 1 percent had fewer direct ways to exert such influence. More to the point, those who have money still have both more power and liberty regardless of whether they actively try to influence political outcomes. Money buys access, true. But it also buys the freedom to live a healthy, dignified, and comfortable life, and plenty more besides. Thanks to the obscene hoarding of wealth by an ever diminishing sliver of Americans, that freedom is increasingly a privilege enjoyed by only a small few — who, with each passing year, wield even greater power over politics and society.

Bernie is right: America is becoming an oligarchy in which the collective abundance of the many is increasingly held by the few. And, until the power of that oligarchy is broken, its democracy will remain more of an ideal than a reality.