On the flip side, workers have lost ground in this recovery, losing 0.8 points of GDP two years since the recession began. This isn’t quite the worst loss following a recession in the past fifty years — which was 0.9 points in the 1981 recession — but it comes close. What is unprecedented is how much the corporate sector has managed to capture of the gains from the current recovery, despite rising inflation. At the same time, inflation is whittling away at workers’ real wages. The net result is a historic realignment of who benefits from economic growth in Canada, shifting away from workers and toward the corporate sector.

Not a Typical Recovery

Unlike recent recessions, the current economic recovery has occurred amid high levels of inflation — something that Canada hasn’t seen since the 1980s. Canada’s labor market is currently strong and unemployment is low. Average hourly wage gains were 3.3 percent over the past year, meaning that workers are seeing their wages fall in real terms because of uncharacteristically high inflation, which ran at 6.8 percent over the same period.

Despite the fact that workers’ wages have been falling behind inflation, wage demands remain a stubborn mainstay in economists’ explanation of inflation. This analysis debunks that myth.

Workers’ wages have sometimes been a cause for inflation, but corporate profits can be too. Input prices — like gas or supply chain issues — can also be causal factors. In this case, workers’ wages are trailing inflation by a wide margin in most industries.

As we’ll see below, wages are losing ground on how much economic growth they capture. But wage growth is mentioned twice in the Bank of Canada’s most recent analysis of inflation, while profits and the corporate sector are not mentioned at all. That’s an important oversight.

Roughly two-thirds of Canada’s gross domestic product (GDP) is made up of workers’ compensation or corporate profits. The rest of GDP is comprised of capital write-offs, unincorporated businesses, as well as net production and import taxes. How that two-thirds of GDP is shared between workers and corporations can tell us who benefits from economic recovery following a recession: workers or corporate profits.

How the Pie Is Divided

The first graph shows how workers and corporations fared in the six recessions in Canada that have occurred over the past fifty years. The clock starts one quarter before the recession and is compared to how things landed eight quarters (two years) afterward.

Looking back over the past half century, Canada experienced six recessions, which are defined as two subsequent quarters of negative real GDP. If we compare how the corporate sector and workers did just before the recession and then two years after it happened, the picture is mixed.

Sometimes workers end up better off and corporations worse off, like in the 1974, 1990, and 2008 recessions. Sometimes it’s the reverse: corporations gain the upper hand, like in 1981 and 2020. Sometimes both workers and corporations see little change two years after a recession, like in 2015 (both experienced small losses as small business and import tax revenue improved).

What’s unique about the most recent recession isn’t just that corporations have come out on top, it’s by how much. In the final months of 2019, corporate profits captured 12.4% of GDP. By the first quarter of 2022, corporate profits had risen to 15.2% of GDP. This unprecedented 2.8 point increase during the pandemic recovery is more than three times larger than the recovery of corporate profits in 1981 (0.8 points of GDP).

On the flip side, workers have lost ground in this recovery, losing 0.8 points of GDP two years since the recession began. This isn’t quite the worst loss following a recession in the past fifty years — which was 0.9 points in the 1981 recession — but it comes close.

Compared to other recessions, the pandemic downturn is most similar to the 1981 recession. Both recessions resulted in an overwhelming recovery of corporate profits while the workers’ recovery stalled. Interestingly, the 1981 recession was also combined with high inflation — another possible parallel to today.

But the current economic recovery hit a new record: no other recovery in the past half century in Canada has provided so much benefit to corporate profits and only one other recovery has been as harder on workers. 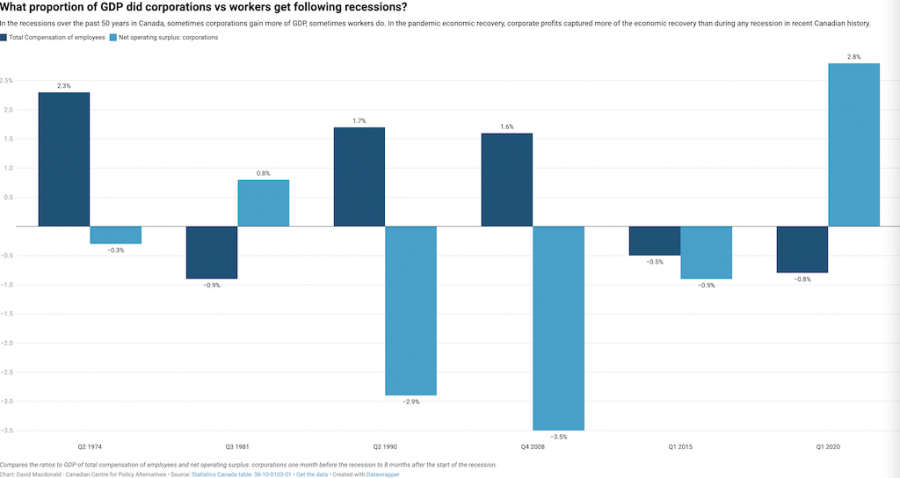 The trough depth of only 1.1 points in the pandemic recession is also unprecedented. The next smallest drop was way back in the 1974 recession, which clocked in a drop of 2.1 points. But all other recessions saw corporate profits-to-GDP fall by between 3.3 and 7.2 points.

Prior to the pandemic, corporate profits were already capturing 12.4 percent of GDP. This was mid-range for this ratio coming into a recession. However, given how little this ratio fell and how quickly it recovered, the corporate profits-to-GDP ratio is the highest of any recovery in the past fifty years in Canada. 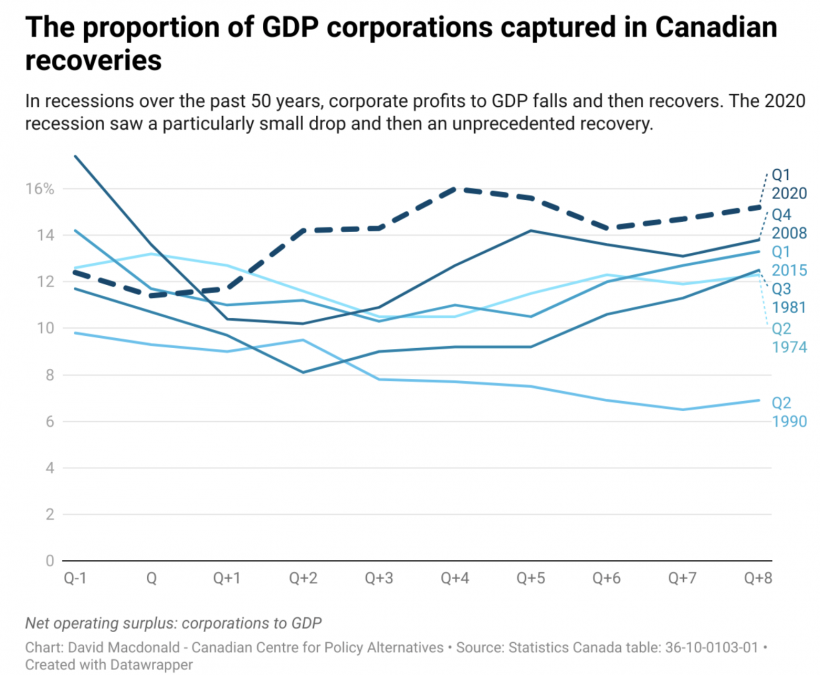 During recessions, total employee compensation — including both wages and benefits — generally rises initially as a proportion of GDP. Workers’ wages are affected by recessions — by layoffs, for instance — but, generally, these repercussions aren’t as volatile as those that affect corporate profits. The question for workers is whether those initial gains in GDP are maintained into the rehiring period.

Two years after the 1974, 1990, and 2008 recessions, employees did manage to hold on to their gains: workers’ pay-to-GDP ratio was higher after two years compared to the months before the recession.

However, in the other three recessions, workers ended up worse off two years after the recession. Workers’ pay-to-GDP ratio going into this recession was higher than the 2008 and 2015 recessions, but after two years, it was roughly the same at 50 percent of GDP. This isn’t quite the worst recessionary point drop over the past half century, but it’s close. 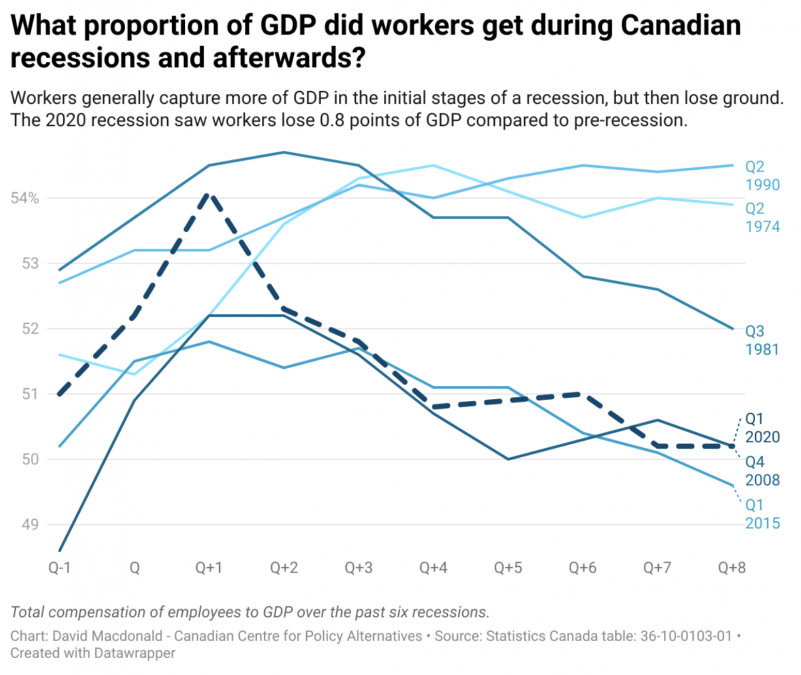 The combination of high Inflation accompanying a recovery isn’t unprecedented in Canada, but it’s been a few decades since it has happened. What is unprecedented is how much of the gains from the current recovery the corporate sector has managed to capture, despite rising inflation — or perhaps because of it. With consumers expecting higher prices, corporations have a once-in-a-generation chance to rapidly raise prices to make up for increased input costs (like transportation) and to capture an unprecedented proportion of economic growth as profits during this economic recovery.

At the same time, the resulting inflation is whittling away at workers’ real wages, diminishing their economic recovery. The net result is a historic realignment of who benefits from economic growth in Canada, shifting away from workers and toward corporate profits.