As of January, the Bureau of Labor Statistics estimated that some 14 million American workers (or just over one in ten) currently belong to unions, less than in 2020. And despite courageous and well-publicized union drives at places like Starbucks and Amazon, union density has continued its long-term decline — down by nearly 50 percent since 1983 when the membership rate was just over two in ten workers. This isn’t, it must be said, because workers don’t want to join unions. Last year, in fact, Gallup found public support for them at a near supermajority of 65 percent, the highest measured since 1965. And according to the latest survey data, nearly half of current nonunion workers want to join a union.

So, what accounts for the disjuncture between this high level of support and actual union membership? A broad answer is that unions have been under concerted political attack since at least the Ronald Reagan era. More specifically, though, America’s existing laws make unionizing a workplace an often impossible task — effectively allowing employers to rig elections outright if they even happen at all. Such is the subject of a recent study by labor scholar Gordon Lafer, which details the many ways in which union elections take place in an environment controlled near exclusively by employers, more closely resembling sham elections in a dictatorship than those in a democracy.

That’s partly due to the illegal and heavy-handed tactics often used by bosses to prevent or dissuade their workers from organizing. As Lafer writes:

Unfortunately, anti-union intimidation tactics have come to define a growing share of the auto industry. At Tesla, for instance, the Labor Board recently concluded that the company committed a series of violations, including illegally firing one union supporter and disciplining another because of their union activity; threatening employees with a loss of stock options if they joined a union; restricting employees from speaking with the media; coercively interrogating union supporters; and barring employees from distributing union information to their co-workers. So too, the CEO at Fuyao Glass — the country’s largest producer of automobile glass — was filmed openly reporting to the firm’s chairman that he had fired employees who tried to organize a union.

Given their frequent use in elections, it’s clear many company bosses regard such tactics as little more than a cost of doing business. In lieu of effective penalties for violating the rules set down by the National Labor Relations Board (NLRB), Lafer points out, the cost to them is generally minimal and in some cases nothing short of laughable (at one Nissan plant in Mississippi, for example, management found to have serially transgressed against the law received little more than a proverbial slap on the wrist: the NLRB ordering it to post a notice promising to respect labor rights and issuing no fine).

Lawbreaking is so common, in fact, that the NLRB finds employers violating their workers’ legal rights in 41.5 percent of all elections it supervises, and finds them to have illegally fired workers in 20 percent of those elections. In elections at bigger employers involving more than sixty workers, Lafer finds, employers break the law in more than half of elections. Given the absurd frequency of illegal tactics, it’s worth asking whether anyone would regard a Congressional or presidential election as fair under the same or similar conditions.

According to data from the Federal Election Commission, the 2016 election prompted a total of 372 charges nationwide for illegal activity, or roughly one for every 367,000 voters. By contrast, Lafer’s analysis finds elections supervised by the NLRB boasting one charge for every 161 eligible voters — a rate around two thousand times greater than in federal elections. Even disregarding illegal activity, he argues, union elections as currently conducted under the National Labor Relations Act cast aside many of the most rudimentary features of electoral democracy as most people understand them. 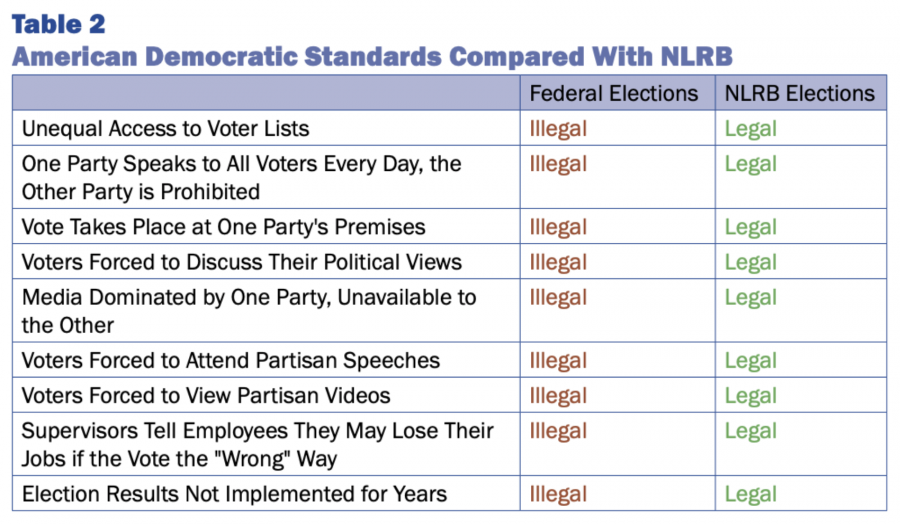 Again, it’s an instructive exercise to imagine what a federal or state election might look like if conducted under similar rules: voters forced to attend mandatory seminars about the virtues of one candidate at their campaign HQ under threat of punishment if they vote the wrong way — and only should someone collect the necessary number of signatures to hold an election in the first place.

It’s a dynamic, in short, that no serious person could argue was free or fair, yet it’s exactly what’s faced by workers across America any time they seek to unionize. It’s also a reminder of the extent to which liberal societies can extend democratic principles into the political sphere while aggressively limiting them in the economy and in the workplace.