Review of The Political Thought of C.B. Macpherson by Frank Cunningham (Palgrave, 2019).

C. B. Macpherson was a legend in Canadian political theory circles, known for his close reading of dense theoretical texts. He managed to bring to light hidden assumptions and tensions with a rare combination of scholarly acumen and bite. But as the author of books with dry titles like Democratic Theory: Essays in Retrieval and Democracy in Alberta: Social Credit and the Party System, Macpherson’s reputation mostly stopped at the university gates.

Fortunately, Frank Cunningham’s excellent recent book, The Political Thought of C.B. Macpherson, gives us a more complete and interesting view of both the man and the democratic socialist core of his writing. In Cunningham’s able hands, Macpherson is revitalized as a figure who can not only teach us about the limitations and strengths of the classical liberal tradition but offer us an inspiring vision for a democratic socialist future.

What is Possessive Individualism?

The work that made Macpherson’s name was 1962’s The Political Theory of Possessive Individualism: Hobbes to Locke. Nominally a history of early modern English political theory, the book had much grander ambitions.

Macpherson’s aim was to analyze the roots of what he called “possessive individualism” — the idea that in the state of nature each of us is an atomic individual, separate from all others, defined by a relentless pursuit of desire that requires us to develop our skills and labor to acquire what we want. Natural human beings owe nothing to society or others, neither when developing their capacities nor enjoying their property.

Far from natural, possessive individualism came into being through a contingent combination of historical events and changing ideological notions, Macpherson shows. In particular, the epic clashes between aristocratic absolutism and capitalist parliamentarianism in seventeenth-century Britain provided fertile soil for philosophers like Thomas Hobbes, James Harrington, and John Locke to reconceive the nature of society along market lines.

According to these theorists, property emerges through the mixing of one’s labor with matter, which creates an entitlement to whatever is produced. A farmer who puts up a fence around a plot of land and then tills the soil is mixing his labor with the soil, which consequently becomes his property, along with the carrots and potatoes that sprout from it.

This workmanship ideal — we should get to keep what we labor for — has remained ideologically powerful. American conservatives like Ben Shapiro still use it to justify stark inequalities.

But as Macpherson points out, the workmanship ideal is unworkable even as the moral basis for capitalist society. If it’s true that we are entitled to the fruits of our labor, how is it that laborers make something but capitalists are then entitled to it as their property? After all, it wasn’t Ray Kroc who flipped a million burgers or Donald Trump who built the Trump Tower. If we really believe that people are entitled to what they labored to create, then it’s impossible to defend the capitalist system.

Locke’s solution was to extend the notion of a contract to the relationship between capitalist employers and laborers. He argued that workers are not entitled to keep what they make if they have contractually agreed to labor for their employers.

Of course, workers could eventually refuse to hand over what they created and instead decide to enjoy it for themselves. Or they could decide to band together and democratically demand changes to society. Possessive individualists therefore came to recognize the need for a powerful state that could guarantee the rights of employers to live off whatever their employees’ labor produced.

Macpherson’s critical history of possessive individualism forms the cornerstone of his legacy. But Cunningham reminds us that in addition to being a sharp reader of classical liberal thought, Macpherson was also a democratic socialist who spent much time theorizing about the problems of contemporary capitalism and what might replace it.

Macpherson insisted that liberalism was right to emphasize the value of individualism, but wrong to assume the only kind of individuality was possessive.

Macpherson’s socialism sprung from his belief that capitalism prevented human beings from fully developing their “productive powers” and “capacities.” Capitalist markets generate stratification: a select few have the material luxury of developing their capacities while everyone else is confined to improving the narrow range of abilities necessary to perform their jobs. On top of that, possessive individualist societies cultivate an atomistic, alienating sense of self that encourages individuals to compete for scarce goods and honors. Greed is both good and inevitable. The state’s job, meanwhile, is to encourage capitalist competition up to the point where individuals begin physically harming one another — and even that line can be crossed if capital demands, say, an imperialist intervention or the suppression of radical movements.

Macpherson insisted that liberalism was right to emphasize the value of individualism — chastising authoritarian socialist states for trampling on individual liberty — but that it was wrong to assume the only kind of individuality was possessive. Better, in Macpherson’s eyes, was a “normative individualism” where we cooperate with each other to form meaningful and democratic communities that mutually empower members to express their individuality. This position resembles what I’ve called the “expressive” rather than “possessive” individualism of John Stuart Mill. But Macpherson gives it a much more democratic tint.

There is a lot to like in this argument. Atomistic, possessive individualism is both theoretically implausible and empirically unsound. People construct their sense of self not simply through laboring and acquiring but by forming meaningful relationships and developing and exercising their diverse capacities. Possessive individualist society is undesirable precisely because its competitive mania erodes human relationships, and, worse, because its inequalities mean that many will never be able to develop more than a fraction of their capacities.

At the same time, Macpherson is right that we shouldn’t run in the opposite direction, subordinating individualism to either cultural traditionalism (as social conservative critics of liberalism would insist) or political movements (as with some socialist experiments). Instead, our aim should be to create a more sincerely individualistic society that recognizes how being able to form deep connections with others and mutually empower one another in the pursuit of the good life is what enables us to become truly self-determining and free.

Democratization is a necessary complement, since it enables us to deliberate about what kind of shared world we want to construct. Not coincidentally, this is one of the reasons why hyper-possessive individualists like neoliberals are so wary of democracy.

Cunningham spends much of his book applying Macpherson’s thinking to contemporary issues, from neoliberalism to feminist and racial justice struggles. He rightly chides Macpherson for endorsing the aims of the civil rights and feminist movements without taking up the issues they raised — an unfortunate omission since both would have leavened Macpherson’s analysis of possessive individualism.

For instance, Domenic Losurdo points out that Locke’s arguments for possessive individualism weren’t just central to justifying capitalist coercion at home (the argument is well summarized by my late friend Connor O’Callaghan); they animated his denigration of Indigenous people’s labor as inefficient and his argument that they had no claim to the land they’d inhabited for centuries. Far better for them to be replaced by hardworking, industrious white settlers who would actually make good use of it. 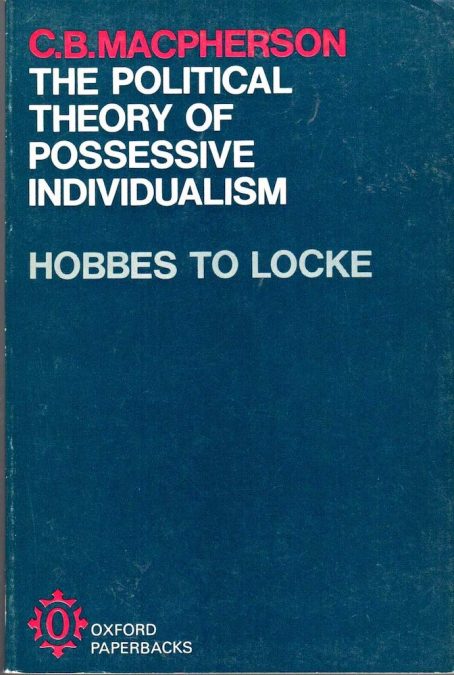 One of the most interesting sections of Cunningham’s book is where he extends Macpherson’s analysis to the topic of neoliberalism. Plenty of classical and egalitarian liberals still held to humanistic ideals of fairness and moral equality that made them skeptical of extending the logic of possessive individualism to all areas of life. Some liberal thinkers like Mill even reached the conclusion that liberalism and capitalism were fundamentally incompatible. Neoliberal thinkers had no such misgivings: they crafted a “pure market” theory, Cunningham argues, that reduced the liberal ideal to what was required by capital. Macpherson died in 1987, during the glory days of the Reagan and Thatcherite counterrevolutions. He was deeply anxious about their assaults on the welfare state and democratic rule, arguing strenuously against figures like Milton Friedman that neoliberalism wasn’t in keeping with either justice or human nature.

Here I think we should part ways with both Macpherson and Cunningham. Neoliberalism is intriguing precisely because it is the historical moment that capitalism’s defenders realized possessive individualism didn’t reflect human nature. Most of us don’t think of ourselves (and don’t want to think of ourselves) as disconnected, sybaritic machines jostling with each other, eager to transform our very personalities into social capital.

Recognizing this reality, and wanting to turbocharge the market’s colonization of all spheres of life, neoliberals tried to both insulate capitalism from democratic pressures and build institutions that could remold people in the image of possessive individualism. Simultaneously, they sought to graft their ideas onto the institutions of the US-led international order, forever banishing the specter of social democracy, much less socialism.

Their project was magnificently successful for a time, and only recently have we seen widespread revolt against the effort to cram the square peg of humanity into the round hole of hyper-possessive individualism. Whether this will end with a revived left-wing politics or an even worse reactionary explosion remains an open question. But Macpherson’s democratic socialist vision can inspire us to think more comprehensively about the ideological zigzags of capitalism’s defenders — and the positive elements of liberalism that can be extracted from its contradictory legacy.