To maintain some minimal legitimacy in the eyes of the public, the United States’ two-party system relies, in part, on the popular belief that at least one of the parties champions the interests of the poor. And in recent years, this point has often been litigated indirectly with arguments over who watches various cable news channels, given their obvious partisan alignments.

The Fox News Channel (FNC) seems to have been winning that argument lately. In part, this is simply because people are credulously buying its Real America branding as the preferred news source for rural America, flyover states, and so on. In part, it’s because this fits so well into the “Party of the Working Class” talking point the GOP has advanced with renewed vigor in the post-Trump era. And in part, I think, it’s because of a widely circulated article that reportedly showed a disproportionate preference for Fox News (even though the article actually claims this preference is negligible).

I’ve been suspicious about this talking point for a while now, so I recently got around to looking at the data itself. Here’s what I found. 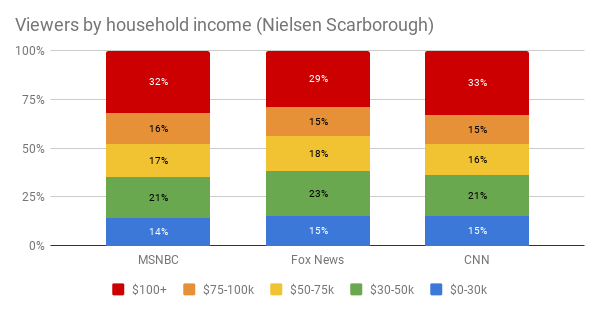 Poor people have no real news preference among MSNBC, Fox News, and CNN. In fact, there are only a few discernible preferences here at all outside of the margin of error, and even those are razor thin. You have to expand the lowest income bracket all the way up to $75,000 for Fox to get a 4 percent lead over CNN and MSNBC, and that lead over MSNBC erodes back toward the margin of error if you include everyone making under six figures.

2) Poor people are disproportionately disinterested in the news. 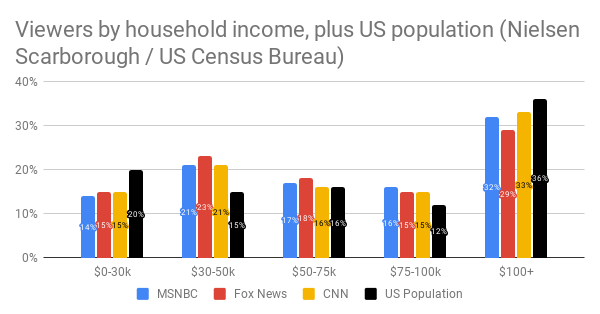 Now compare these same numbers to how much of the US population falls within each income bracket. People who make up the lowest income bracket are 20 percent of the population, but the percentage of poor people watching cable news is significantly smaller. Even the rich, who also watch less cable news than their numbers would predict, are more likely to watch it than poor people.

This comparison brings some important perspective to the numbers in point (1). Even if any one of the cable news networks had 4 points higher viewership among the poor than it actually does, it would still be relatively unpopular with them. This point holds for the rich as well: even though CNN has the highest viewership among people making six figures (or more) of all cable news channels, it still is disproportionately ignored by the rich. 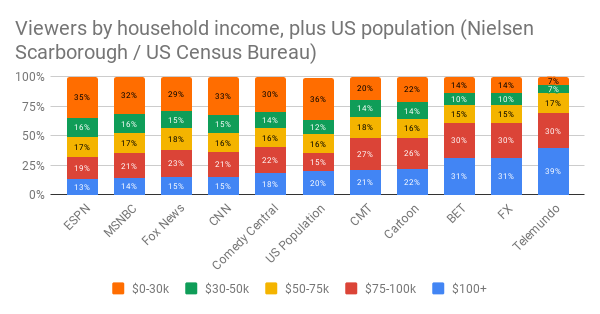 Is (2) just a matter of poor people not watching any television? Nope. That seems to be true of the rich, who are always underrepresented in television audiences — but the poor watch a lot of TV. They just don’t watch cable news.

None of these three points should be very surprising to anyone who is even remotely acquainted with how poor people in the United States tend to engage — or rather, tend not to engage — with partisan politics. On one hand, the neoliberal austerity long favored by Democrats and Republicans alike simply has nothing to offer them, and the undemocratic nature of our political system means that it’s very unlikely that their participation could change this.

On the other hand, meanwhile, US politics — and its partisan coverage on cable news — falls, for most people, along a spectrum stretching from “boring” to “stressful.” Its melodramas are formulaic, its pace is tedious, and its partisans are some of the most obnoxious people in the world. Why would you spend any time at all watching any of this when there are Always Sunny reruns on FX?

Ultimately, of course, all the numbers I’ve presented here are trivial, given the minuscule number of people who watch any cable news. Combined, all of these channels only pulled in 4.8 million viewers during prime time in April — that’s not even as large as the viewership for the smallest network nightly news program in one week (CBS Evening News, which had 4.9 million viewers during the first week in April).

To put these demographics in perspective, FNC’s lead over MSNBC among viewers making less than six figures comes to 401,000 — about 0.1 percent of the US population. That’s nothing.