Every day, I take a peek at Facebook’s “Memories” function that takes you back to whatever you posted one or three or ten years ago today. Each time, I brace myself for whatever wild ride down memory lane will ensue: smiling photos with an ex on a sunny vacation, embarrassing old statuses quoting indie band lyrics, bafflingly opaque and melodramatic teenage references to . . . what, it’s often unclear, except Feelings.

A few weeks ago, “On This Day” presented some selfies from last year of me canvassing in the frigid tundra of Clinton, Iowa — my fingers numb, my toes gingerly trudging over a thick layer of ice coating the whole town — and a pose with several close Democratic Socialists of America comrades next to a snowman holding a Bernie sign. Then it was a remembrance of the Chicago bus driver who stopped the bus in the middle of a busy street to pick me up, despite my being stranded halfway between bus stops, because he saw my Sanders 2020 hat. “I had to stop for Bernie!” he proclaimed as soon as I boarded.

Another day, it was a photo of me at a Chicago bar near my house that hosted numerous 2020 Democratic debate-watching parties, working the packed room with a clipboard to sign up volunteers for the campaign. I had just finished speaking during a break in the debate; Sanders was at the crest of his campaign, and we all actually believed for a fleeting moment that a socialist might become president of the United States.

I remember telling the room to practice saying “President. Bernie. Sanders” out loud, then pausing to hear everyone repeat it back. “Has a nice mouth feel, doesn’t it?” I asked into the mic.

My emotions have surged every time I’ve seen these old posts. Today’s trip was no exception, but not because of a memory of personal involvement. This week is the five-year anniversary of Sanders’s debate against Hillary Clinton in which he proclaimed from the stage, “I am proud to say that Henry Kissinger is not my friend.”

"I am proud to say that Henry Kissinger is not my friend."

Five years ago today, @BernieSanders attacked the legacy of Henry Kissinger in a presidential debate. pic.twitter.com/HLDHhRUcV4

I jumped up from my couch while watching that moment live in 2016. I’ve executed many bad Bernie impressions of it in the half-decade since. I’ve joked that if this were the single thing that came out of both Sanders campaigns, all the time and money and effort expended on his campaigns still would have been worth it.

While there is much more to be said about him than this, Henry Kissinger is directly responsible for more massive and appalling bloodshed than anyone else alive. Here’s how historian Greg Grandin puts it:

A full tally hasn’t been done, but a back-of-the-envelope count would attribute 3, maybe 4 million deaths to Kissinger’s actions, but that number probably undercounts his victims in southern Africa. Pull but one string from the current tangle of today’s multiple foreign policy crises, and odds are it will lead back to something Kissinger did between 1968 and 1977. Over-reliance on Saudi oil? That’s Kissinger. Blowback from the instrumental use of radical Islam to destabilize Soviet allies? Again, Kissinger. An unstable arms race in the Middle East? Check, Kissinger. Sunni-Shia rivalry? Yup, Kissinger. The impasse in Israel-Palestine? Kissinger. Radicalization of Iran? “An act of folly” was how veteran diplomat George Ball described Kissinger’s relationship to the Shah. Militarization of the Persian Gulf? Kissinger, Kissinger, Kissinger.

Kissinger is one of the most evil human beings to ever walk the earth. If there is a hell, Henry will be swiftly escorted there through a no-line, no-wait express lane upon death. Satan will waive the usual paperwork and allow Kissinger’s deposit directly into the lake of fire.

You wouldn’t know this from observing key Democratic Party leaders, though. Hillary Clinton palled around with him and reviewed his book World Order for the Washington Post in 2014; Facebook’s Mark Zuckerberg promoted it a year later. Samantha Power, Barack Obama’s United Nations ambassador and onetime chair of his Atrocities Prevention Board, posed for a photo with Kissinger at a Yankees game. 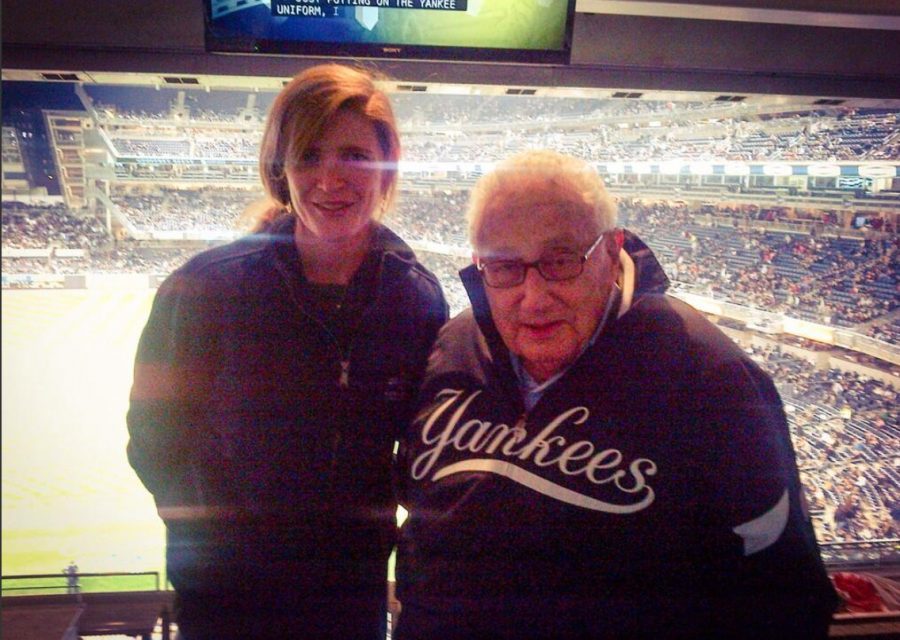 Few major figures in the Democratic Party — this country’s supposed party of the Left, the supposed party with a heart, the supposed alternative to the party of untrammeled, unabashed bloodthirst — have ever rejected an overture from him, much less denounced him with a scintilla of the opprobrium he deserves.

Bernie Sanders did, without hesitation and at length, on national television.

I hadn’t watched the full clip in several years, so this morning, I clicked on the memory and loaded the video. Here’s what he says:

Where the secretary and I have a very profound difference, in the last debate — and I believe in her book — very good book, by the way — in her book and in this last debate, she talked about getting the approval or the support or the mentoring of Henry Kissinger. Now, I find it rather amazing, because I happen to believe that Henry Kissinger was one of the most destructive secretaries of state in the modern history of this country. I am proud to say that Henry Kissinger is not my friend. I will not take advice from Henry Kissinger. And in fact, Kissinger’s actions in Cambodia, when the United States bombed that country, overthrew Prince Sihanouk, created the instability for Pol Pot and the Khmer Rouge to come in, who then butchered some 3 million innocent people, one of the worst genocides in the history of the world. So count me in as somebody who will not be listening to Henry Kissinger.

Sanders didn’t just denounce both Kissinger and Clinton for her association with him. He also quickly enumerated one of the worst of Kissinger’s many atrocities, recounting the massive bloodletting he approved in Cambodia, a country far from the United States that few Americans ever spend a moment of their lives thinking about. This statement by Sanders is of a piece with his longtime anti-imperialist record that, while not spotless, includes everything from his opposition to US intervention in Central America in the 1980s to opposing the war in Iraq to courageous denunciations of Israel’s human rights atrocities against Palestine to speaking out against the brutal US-backed Saudi war in Yemen.

Anthony Bourdain once wrote, “Once you’ve been to Cambodia, you’ll never stop wanting to beat Henry Kissinger to death with your bare hands.” I’ve never been to Cambodia, but I share the feeling. Watching the video of Sanders’s debate performance five years ago, I wondered if Bernie did, too. Sometimes looking back on the Bernie campaign can feel bittersweet. But jogging my memory of Bernie’s denouncement of Henry Kissinger was a reminder of what was so special about Sanders’s presidential runs — and why no one who threw themselves into his campaigns should regret their involvement for a single moment.