Advocates of progressive labor law reform in the US have long hoped to “Canadianize” the National Labor Relations Act (NLRA) of 1935 — also known as the Wagner Act. Canada imported key elements of the Wagner model from its southern neighbor in the early 1940s, including the distinctive features of majoritarianism and exclusivity. If a union could show that the majority of workers in a bargaining unit supported it, it would receive a government-issued certificate, allowing it to represent all of the employees in that unit.

Canada’s appropriation of the Wagner model was natural enough, in view of the close economic, geographic, and social ties between the two countries. By the 1940s, US-based international unions were already organizing employees in Canadian subsidiaries of American corporations.

Despite the similarities, there were also important differences between the industrial relations models of the two countries. At first, hardly anyone noticed these variations on the Wagner model. In both Canada and the United States, the model appeared to be a very successful framework for collective bargaining in the large industrial workplaces that dominated the economic landscape. However, by the early 1980s, union density in the United States had entered into a long-term tailspin that has continued to this day.

From his position at Harvard Law School, Canadian labor law professor Paul Weiler published a series of influential pieces in the late 1980s, arguing that the United States decline in collective bargaining coverage could be halted by some Canadian-inspired amendments to the NLRA. Weiler supported his thesis with a dramatic chart contrasting Canada’s mid-1980s union density of nearly 40 percent with the US rate of less than 25 percent and falling. What explained the resilience of the Canadian variation of the Wagner model?

Weiler’s arguments sparked interest in comparative labor law research that would influence labor law reform proposals in the United States for decades. Weiler described variations in the Wagner model that put Canadian unions in a stronger position. They included the following:

Weiler also proposed that there should be mandatory employee committees to complement the Wagner model, like work councils. This idea was based on the joint health and safety committees that some Canadian provinces had mandated by the 1980s.

The authorities in the United States did not take up any of these proposals. US union density has continued falling, to 8 percent today, against about 30 percent in Canada. However, during the recent election campaign, Joe Biden signaled his support for many of the reforms proposed by Weiler.

Biden’s campaign promises included a pledge to support and “go beyond” the Protecting the Right to Organize Act (PRO Act). The Democratic president-elect has promised to implement “card-check” union certification and expand job protections and picketing rights for strikers.

Biden has also indicated his willingness to introduce other rules that would align the US more closely with the Canadian model. These would include a broader definition of who is considered an “employee” — one that would bring dependent contractors under the protective umbrella of labor legislation — and a ban on “right to work” laws.

Joe Biden’s proposals to reform US labor law and strengthen the Wagner model are welcome news to supporters of collective bargaining in Canada. If enacted, they could stem the downward pressure on labor laws and the decline in collective bargaining in both countries, so that progressives could then turn their attention to the bigger challenge of building a new labor law model for the twenty-first century. But on their own, they are not enough.

These proposals are all grounded in the idea that the Wagner framework of industrial relations can be made serviceable with a few Canadian-inspired tweaks. Such would provide an important boost to union organizing in the United States, however we should also resist the temptation to romanticize Canada’s model, despite the features that distinguish it from the US version of Wagner. 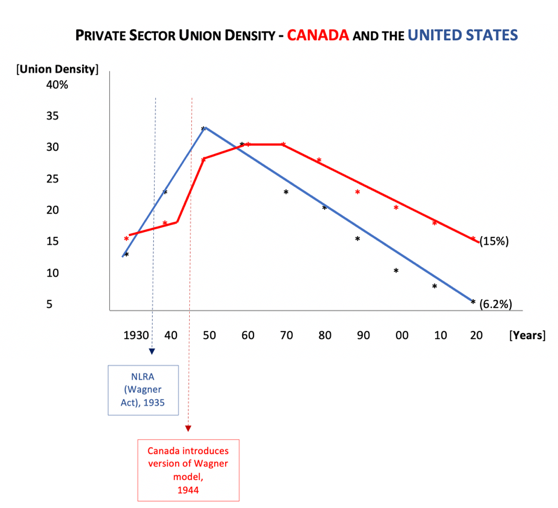 As Paul Weiler wrote in 1984: “The prospects for collective bargaining in the Canadian private sector are not particularly rosy, despite the more favorable legal framework.” That’s why clear-sighted thinkers have recognized the need for labor law to move beyond Wagner altogether.

Race to the Bottom

Developments in the United States will strongly influence the future of Canadian labor law, not least because of the close economic integration that has developed between the two countries since the 1988 Canada-US Trade Agreement and NAFTA six years later.

In the post “free trade” era, weaker labor laws in the United States have exerted a notable downward pressure on the Canadian model. Business interests and conservative politicians in Canada routinely describe protective labor laws as “job killers” that will make Canadian firms less competitive and drive jobs south of the border.

The threat that companies will relocate to the United States in search of a weaker regulatory environment is ever present. As one conservative politician in British Columbia argued, when making the case against card-check union certification: “You simply cannot pass labor legislation as an island. Capital can go anywhere in the world; it can go to Whatcom County, for example” — just across the Canadian border in Washington State.

In 1996, the Ontario Labor Relations Board ruled that Walmart had illegally threatened to close one of its stores if its employees voted to join a union. When the board subsequently ordered the company to recognize and bargain with the union, Walmart lobbied the province’s conservative government to strip the board of its power to do so.

The government duly obliged, passing what became known as the “Walmart Bill.” In 2012, Caterpillar shut down a factory in London, Ontario, laying off nearly five hundred workers, and shifted production to Indiana, taking advantage of the lower wages and right-to-work legislation on offer in the US state.

Right-wing think tanks in Canada like the Fraser Institute, which is partially funded by the Koch Brothers, are pressing for Canada to weaken its labor laws in line with US practice. Such efforts bore fruit this year in Alberta, where a conservative government introduced a law inspired by the US model of “agency fees” and the US Supreme Court’s decision in Janus v. AFSCME. The law requires workers to specifically opt into the use of union dues used for “political activities,” which are broadly defined. This legislation may well be the start of a broader attack on union dues in Canada.

Canadian workers will be vulnerable to such pressures as long as their US counterparts are denied basic rights to organize. By the same token, any steps in the right direction south of the border will help Canada’s labor movement, worker advocates, and progressive politicians in resisting a race to the bottom. But tinkering with the Wagner model won’t be enough — after more than eighty years, it’s time for a fresh start.