In the closing hours of the 2020 election, Donald Trump is dishonestly casting his reelection bid as a crusade against the corrupt swamp that he helped expand and profited from, while Democrats are promising that if Trump is defeated, voters will finally be able to go back to brunch as the Washington establishment returns itself to power.

To state the obvious: Trump pretending to be an anti-establishment populist is patently absurd, and everyone knows it. He built his own private swamp in the middle of the corrupt marshland that is Washington, DC. He has used the presidency to enrich himself, his family, and his donors, while grossly mismanaging the response to a lethal pandemic.

He must be defeated because he has done almost nothing to help millions of people being pulverized by skyrocketing costs for health care, housing, and other basic necessities of life. Instead of triaging the economic and public health crises, he and his party have focused on packing the court with right-wing extremists and making it harder for Americans to vote him out of office.

In the process, they have transformed unethical voter suppression from a stealth scheme into a very public campaign tactic, normalizing anti-democratic fascism as just another accepted election strategy. And he is now all but threatening to stage a coup if he loses.

Obama: “You’re Not Going to Have to Think About Them”

To counter Trump’s assault, the Democratic campaign this weekend returned to Flint, Michigan — the place the Obama administration left to suffer through a horrific toxic water crisis, exacerbated by Michigan’s then-Republican governor (who has since endorsed Biden).

This was the party’s flaccid message in the nation’s poorest city, a former General Motors manufacturing hub destroyed by deindustrialization and offshoring.

The same message was promoted this weekend in the Washington Post by corporate consultant Hillary Rosen, whose firm works for Biden. Rosen told the newspaper that Biden “is not somebody who is coming in to disrupt Washington. He’s coming in to heal Washington.”

This is a shrewdly concocted mix of revisionism and expectation management — and if Biden (hopefully) defeats Trump, it sets the stage for a repeat of the events that got us to this horrible moment in the first place.

The Perils of Brunch Liberalism

It is true that the Obama years were not defined by petty bullshit that is routinely called “scandalous.” However, his two terms were hardly free of actual scandals. They were just the type of scandals that ruin regular people’s lives, but not the lives of people who wear expensive suits to work in Washington.

Obama helmed a presidency bankrolled by Wall Street donors that refused to prosecute a single banker who engineered a financial crisis that destroyed millions of lives.

He turned promises of significant health care reform into legislation that included a few positive consumer protections, but also enriched and strengthened the power of private insurance companies and dropped a promised public option.

He acknowledged the threat of climate change, but then publicly demanded credit from the fossil fuel industry for helping boost oil production during a climate apocalypse.

He pledged to walk picket lines if workers’ union rights were under attack, but then he promptly walked away from promised labor law reform.

And yes, Obama’s administration slow-walked the response to the environmental catastrophe in Flint, Michigan.

These kinds of scandals sowed deep disappointment, disaffection, and economic dislocation, which helped fuel the backlash energy that powered the Tea Party and eventually Trump’s presidential candidacy. And they happened because of the kind of disengagement Obama envisioned when he promised that if Biden and Harris win, “you’re not going to have to think about them every day.” In this vision, the new White House lets us all just go back to brunch.

That refrain represents a longing that has pervaded Democratic politics in the Trump years, embodied by the now-infamous protest signs insisting that “if Hillary was president, we’d all be at brunch.” 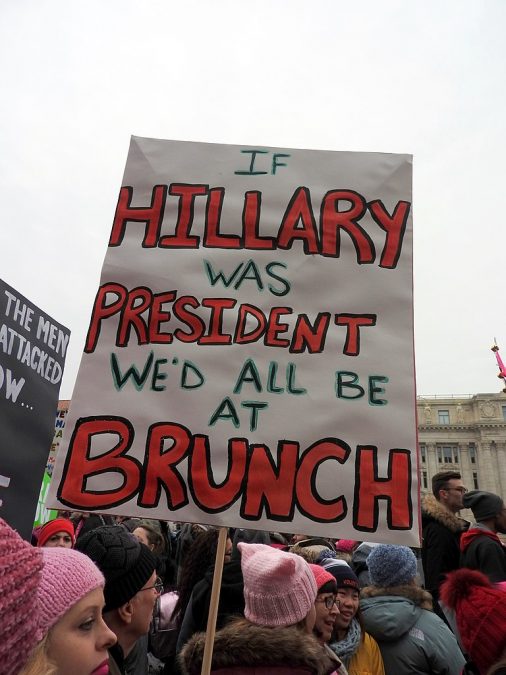 The idea is that once a Democratic president is in office, everyone can disengage and demobilize, because the government is being run by Josh Lyman, Sam Seaborn, Leo McGarry, and President Bartlet, who always have our best interests at heart and can fix everything on their own, in one succinct television episode.

Of course, it is absolutely true that what sets Trump apart from other presidents is his desire to incite, inflame, and sow anxiety in the American psyche — and Obama is certainly correct in suggesting that Trump’s psychological assault must end.

However, Obama’s Flint speech went further. Echoing a previous refrain from Democratic Sen. Michael Bennet, it was a call to resurrect Brunch Liberalism whereby large swaths of the American left disengage and defer in much the same way it did during the Obama administration, to disastrous effect.

Though it is now forgotten history, the history is clear: After years of mass protest and activism against the George W. Bush administration, many liberal activists, voters, and advocacy groups went to brunch after the 2008 election, fell in line and refused to pressure the new administration to do much of anything. Those that dared to speak out were often berated and shamed.

In touting a presidency we don’t have to think much about, Obama conjures the notion of a Democratic administration once again insulated from pressure from an electorate whose poorer populations are too busy trying to survive, and whose affluent liberals are thrilled to be back at Sunday morning brunch after watching an MSNBC host reassure them that everything is All Good.

This message is rife with contradiction: For months, Democratic Party leaders have told us we must be deeply engaged in the nitty-gritty of politics because our lives depend on it. And yet they and many party regulars are also pining for the day when we can all go back to mid-afternoon mimosas and let them run politics in faraway Washington. They want engagement only at election time — they do not want it when it’s time to govern.

The problem, of course, is that the aforementioned scandals and capitulations that defined the Obama presidency — and that ultimately led to the Trump presidency — were fostered by the disengagement and deference. Put simply, Brunch Liberalism meant far too little organized activism pressuring the Obama administration early on to deliver for the working class with a bigger stimulus package, more serious health care reforms, and a Wall Street crackdown.

Undisturbed by such pressure, the Obama administration was empowered to focus more on appeasing its Wall Street donors and other power players like the health insurance industry and drug companies. That left intact the economic system we still live with today — one in which finance, health insurance and pharmaceutical industry profits are skyrocketing, while millions of people lose their jobs, their health care and their homes in the middle of a pandemic.

AOC: “There’s No Going Back To Brunch”

Hopefully, Biden wins on Tuesday — but if that happens, and we then all follow Obama back to brunch, rest assured that such disengagement will allow the power elite’s self-serving mythology to fill the void.

On cable TV, in newspaper columns and in endless tweets, these Beltway courtiers will build off Rosen’s sentiment in the Washington Post. They will tell the fantastical tale of an election that supposedly provided a popular mandate to return the old Washington establishment to power, because Trump’s failures have allegedly taught America to love the swamp that created the economic, environmental, and political emergencies now threatening the country.

That story will then justify a renewed culture of capitulation birthing new versions of a way-too-meager stimulus bill, inadequate health care reforms, a both-sides climate approach, and ineffectually weak financial regulations that defined the early Obama era — all under the veneer of buzzwords like “pragmatism” and “moderation.”

This would not only be bad policy, but a dangerously wrong interpretation of a Trump defeat.

Democrats were originally thrown out of power in Washington and in state capitals, in part, because too many of them spent eight years protecting the gentry while promoting a “let them eat cake” message to a public that was opportunistically radicalized by false right-wing populists.

While planning a new administration from holdover sinecures in Washington, Democrats’ royal-court-in-exile should not now interpret a counterrevolution against Republicans’ mad king as some sort of mandate for stasis. They also should not interpret a Trump loss as popular pining for a return to corporate Democrats’ slightly kinder, gentler version of feudalism.

Yes, the mad king needs to go, but stasis is what brought him to power in the first place, and status quo politics is what would conjure an even more destructive mad king in the future.

Sure, Obama may celebrate the idea of a presidency that requires no day-to-day, moment-to-moment engagement from an anesthetized population of brunch enthusiasts. That would be just fine for him in his $12 million Martha’s Vineyard palace with its spectacular ocean views.

But disengagement won’t be fine for the rest of us. As Rep. Alexandria Ocasio-Cortez recently said: “After we work to command victory in November, I need folks to realize that there’s no going back to brunch.”

AOC is right to sound that alarm, because going back to brunch could create the atmosphere for a new administration that brushes off calls for bold action on health care, climate change, wages, union rights, and corporate regulation. Worse, it could let the new president follow through on his promises to donors that nothing would fundamentally change and that there is no forthcoming legislation to change corporate behavior.

That would enlarge all the crises bearing down on our society — and potentially create the backlash conditions for another Trump, but worse.

As we head into what is likely to be a tumultuous week, scholars and historians are right now warning that democracy all over the world is on the brink — and the only way to rescue it from autocracy is by generating more activism and civic engagement, not by telling everyone we will soon be able to run off to a mid-afternoon meal.

In America, the best way to prevent a new, more dangerous Trump is to refuse to see this election as an end point. It has to be the beginning of longer-term, fearless engagement that makes concrete demands of every public official — even those we like.

So no matter what happens — whether Trump wins or Biden wins — we should all be able to make one post-election commitment: we’re never going back to brunch, because if we do, our future is doomed. If we don’t, a better world may still be possible.