Whether Democrats win the US Senate — and whether their senators are progressive — could be the difference between life and death for millions of people. A Democratic Senate filled with proponents of a Green New Deal and Medicare for All is one that at least offers the slim possibility of averting climate and health care cataclysms. A Republican Senate — or a Senate run by corporate Democrats — will almost certainly make the climate and health care emergencies far worse, likely resulting in mass casualties and suffering.

In this life-or-death battle, winnable Senate seats in Democratic-leaning states are everything. If we’re going to have any chance to survive the crises in front of us, these Senate seats cannot be lost to Republicans. They also cannot be bequeathed to Democratic corporatists who will defend the status quo and behave in reckless ways that jeopardize the party’s prospects of winning a general election.

But that is what Democratic leaders in Washington are trying to do here in Colorado — the state that could end up deciding control of the Senate. They are now spending big to buy the June 30 primary for a candidate who has shilled for fossil fuel companies, opposed Medicare for All, violated anti-corruption laws, vilified progressives, and engulfed himself in high-profile scandals that could lose a general election. And they are doing this even though there is another Democrat who is not only far more progressive, but arguably better positioned to defeat the Republican incumbent.

For years, Democratic party leaders have publicly insisted they follow a “just win, baby” playbook that leads them to support any candidate — liberal or moderate — best positioned to win GOP seats. But activists have come to suspect that, in fact, party leaders are actually willing to prioritize crushing progressive candidates, even if that might risk losing general elections to Republicans.

Democratic leaders’ heavy-handed behavior in Colorado seems to confirm those suspicions — and it could now jeopardize the entire effort to take back Congress from Donald Trump’s party.

A Winnable Senate Race for Almost Any Democrat

Colorado is now a Democratic stronghold — so much so that incumbent Republican senator Cory Gardner is Colorado’s only remaining statewide GOP elected official, and polls show he’s wildly unpopular. If Democrats put up literally any serviceable candidate, it’s a very good bet they will win back this seat that they lost six years ago in the national Republican wave of 2014.

This is a rare opportunity to put a real progressive in the Senate — or at least a lawmaker who would be as progressive as former Colorado Democratic senator Mark Udall, the liberal-leaning environmental champion who lost to Gardner. And that’s what the party has in former Colorado House speaker Andrew Romanoff.

He is a well-respected, grassroots-funded Democrat campaigning for Medicare for All and a Green New Deal. Though he has lost two tough races in the last decade, Romanoff is no political amateur: in 2004 — a terrible year for Democrats — he led Colorado Democrats’ successful effort to win the state legislature for the first time in thirty years. While being disowned by national party support and rejecting PAC money, he has scratched and clawed his way to raising a respectable $3 million. He has also scooped up endorsements from hundreds of current and former Colorado elected officials and won a decisive victory at the Democratic State Assembly. And he made waves earlier this year with an envelope-pushing ad rightly sounding the alarm about climate change.

None of that has moved national party leaders to Romanoff’s campaign — and even if they won’t admit it, every politico in Colorado knows exactly why. It’s because Romanoff committed a sin considered unforgivable by Washington insiders: a decade ago he dared to run a progressive primary challenge against Michael Bennet, the former corporate raider who worked for right-wing billionaire Philip Anschutz, who helped Wall Street loot the Denver school system, and who then leveraged his connections to get himself appointed to the Senate without ever running in a single election.

Primarying an incumbent senator like Bennet is seen as a high crime among Washington Democrats — one that can never be forgiven, even a decade later. And so after Romanoff announced his candidacy, New York senator Chuck Schumer’s political machine — which had been run by Bennet in 2014 when Democrats got destroyed in Senate races — frantically sought out a corporate-approved alternative. The machine settled on trying to buy the Senate Democratic primary for John Hickenlooper after the former Democratic governor’s presidential campaign flamed out.

Ignoring pleas from local Democratic officials, Schumer’s Democratic Senatorial Campaign Committee publicly endorsed Hickenlooper, who had once employed Bennet as his chief of staff. The committee also reportedly threatened to blacklist any consultants who worked for Romanoff.

What makes this kind of heavy-handed behavior in a blue state so notable is that Hickenlooper isn’t any old run-of-the-mill Democrat. He’s not Udall, a relatively reliable liberal. He’s not even Bennet, a minimally left-of-center moderate who at least occasionally pretends to care about things like the environment.

Here in Colorado, Hickenlooper has earned the nickname “Rocky Mountain Joe Manchin” because he’s behaved like a Republican.

Consider a few highlights from his career: 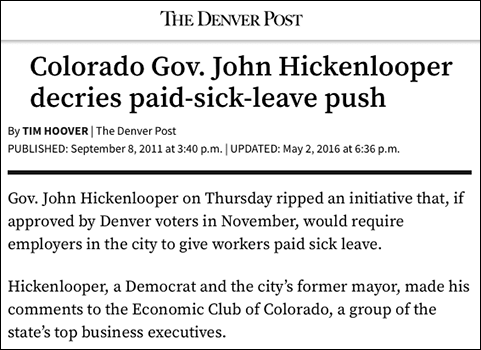 National Democrats justify ignoring this record by insisting that Hickenlooper is the “electable” candidate in the Senate race — and they point to polls showing him ahead of Gardner in a head-to-head matchup. But those surveys were conducted before his campaign recently collapsed into the kind of headline-grabbing scandals that can lose general elections.

In the last month, Hickenlooper just defied a subpoena and was then found guilty of violating Colorado’s cornerstone anti-corruption law — a scandal that revolved around his use of a private jet owned by the company run by Donald Trump’s Colorado campaign cochairman.

Then CBS News revealed that just after a major fossil fuel firm’s infrastructure caused a deadly explosion, Hickenlooper had his gubernatorial office rake in cash from the same company, just as Hickenlooper was squelching stronger oil/gas regulations.

And then a video emerged of Hickenlooper likening his job as a politician to a slave on a slave ship, being whipped by his political scheduler. Yes, that really happened.

All of this has generated a spate of terrible national and local headlines. As the Associated Press noted: “The former Colorado governor was supposed to be Democrats’ worry-free solution to the Colorado Senate race, but he has stumbled badly.”

And he has stumbled at precisely the moment Democrats should be unifying behind the strongest possible general election candidate.

Romanoff Surges, as Cash Floods in to Try to Rescue Hickenlooper

Amid the scandals, Romanoff may have started to gain some traction in the final weeks of the campaign: at least one new poll shows him surging, and Hickenlooper suffering significant erosion.

The Romanoff campaign poll from Myers Research shows that whereas Hickenlooper had been cruising to the nomination, there has been a thirty-seven-point shift toward Romanoff in the last eight months — a shift likely powered by both the scandals and by Romanoff’s ads down the final stretch. Indeed, the survey found that Romanoff has seen a net twenty-two-point boost from voters who say they’ve seen more information about him in the last few weeks. That’s a big contrast with Hickenlooper — voters say they’ve heard more about him, but 35 percent of them say that information has made them less likely to support him. (Read the entire polling memo here.)

If Democratic leaders really had a “just win, baby” attitude — if they were really only focused on winning a general election, rather than purging progressives from the party — it stands to reason that they would quickly back Romanoff, or at least retreat and remain neutral.

Instead, they just made the decision to pump $1 million of super PAC cash into the race to try to drag Hickenlooper’s sagging campaign over the finish line.

With the swarm of scandals intensifying, Hickenlooper has continued to insist he is the “electable” candidate — but that’s hardly a convincing argument from a former two-term governor who is apparently so politically weak that he needs his national party to buy him his own party’s nomination.

That leads back to a big question: Why do Democratic leaders in Washington continue to intervene in local primaries and put their thumbs on the scales?

We’ve seen this not only in Colorado, but also in Kentucky and Iowa, where the party and its aligned national super PAC have similarly tried to rig the primaries for corporate-friendly candidates handpicked by Washington politicians.

That donor class therefore does not want progressives anywhere near the levers of power, and party leaders in Washington loyally serve those big donors — even if that means crushing democracy inside the Democratic Party.