Paul Adolph Volcker is dead at the age of ninety-two. (Most accounts of the man suppress the middle name, though it was often pointed out with bitter glee by builders and others who were undone by his high-interest-rate policies in the early 1980s.) As I wrote in Left Business Observer when he left office in 1987, if capitalism gave out a Hero of Accumulation award, he would have been first on the honors list.

Let’s recall what he did, because all the worshipful obits will almost certainly sanitize the history. Volcker was appointed chair of the Federal Reserve by Jimmy Carter — on the recommendation of David Rockefeller — to get inflation under control. Carter’s old Georgia friend and adviser Bert Lance tried to tell him it was a mistake and that it would almost certainly cost him reelection. Lance, now remembered as little more than a Good Old Boy, if he’s remembered at all, was right. But Carter ignored him. The charms of a Rockefeller are irresistible.

Inflation is a complicated thing, and this is no place to delve into those complexities. For the purposes of this post, I’ll just say a couple of things. Part of the reason for rising inflation in the 1970s was that oil exporters had been jacking up prices — from under $4 a barrel to over $10 in the first oil shock of 1973–1974, and then from under $15 to over $30 in the second shock, 1979–1980. Other commodity-exporting countries were trying to emulate their oil-exporting colleagues. And with those commodity price moves came calls for a new world economic order — one in which the North no longer lorded it over the South, and one in which the South claimed a larger portion of global wealth.

Domestically, labor was restive. There was an average of almost 300 major strikes a year during the 1970s — more in the earlier years of the decade, but they persisted throughout. There was a lot of worry that the working class had developed a serious attitude problem. There’s an appealing theory that reads inflation as a sign of stalemate in the class conflict: workers push wages higher, and employers respond by raising prices to protect profits. If the workers were winning, profits would suffer; if employers were, wages would suffer. Neither happened in the 1970s.

The month Volcker took office, August 1979, the consumer price index was up almost 12 percent from the year before. (See graph below.) But the unemployment rate was 5.8 percent — not low, but below average for the 1970s. In congressional testimony a couple of months later, Volcker declared that “The standard of living of the average American has to decline” if inflation was going to be subdued. He worked hard to make that happen. 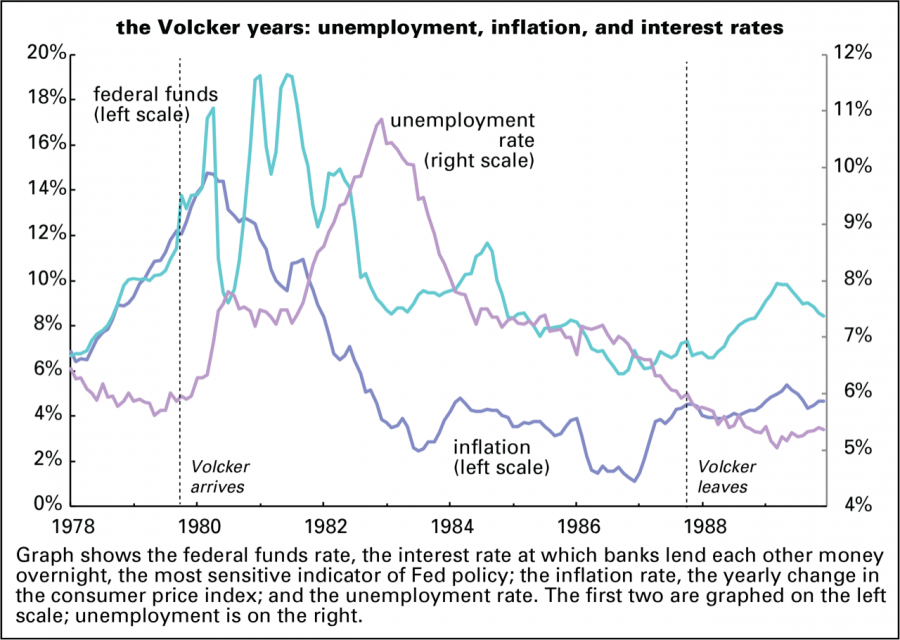 He made that happen by driving interest rates up to levels previously unknown in US history (and the history at my fingertips goes back to 1857). The federal funds rate — the rate at which banks lend each other money overnight, the most sensitive indicator of Fed policy — went from 10.9 percent when he took office to 17.6 percent in April 1980. That drastic tightening of monetary policy sent the economy into a sharp recession. Unemployment rose by almost two points in a matter of months. The downturn was so brutal that Volcker retreated. He — and while Fed policy is set by a committee, the institution is dominated by its chair, and Volcker was a particularly forceful chair — drove fed funds briefly below 10 percent in the summer of 1980.

But inflation persisted as the economy recovered, so Volcker went back to war. He pushed the Fed funds rate to a peak of 19 percent in January 1981, let it fall a few points into the spring, then pushed it back to 19 percent in June and July. The economy went into a deep recession, the worst since the 1930s (though we outdid it in 2008–2009). Bankruptcies zoomed, and the unemployment rate broke 8 percent in November 1981, 9 percent in March 1982, and 10 percent in September. Inflation, which had been falling in 1980 but not seriously enough for Volcker, began falling for real in late 1981.

With inflation breaking below 6 percent, Volcker relented in August 1982 — not so much because the US working class was suffering and interest-sensitive industries like housing and manufacturing were in depression, but because Mexico was about to “blow,” as he put it. Like many Latin American countries, Mexico had borrowed heavily in the 1970s, and the interest-rate spike was ruining them. Fearing that a Mexican default would bring down the banking system, Volcker began pushing down the fed funds rate, and in August 1982, he made it clear that the regime of extreme monetary tightness was over. Inflation continued to fall, however, breaking below 3 percent in 1983. 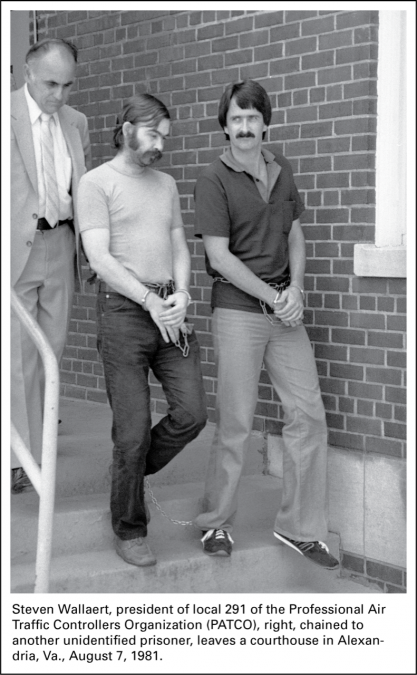 From the point of view of the ruling class, a couple of very good things happened as a result of that regime of extreme tightness. The recession scared the hell out of the working class, leaving millions in terror of job loss. That consciousness was reinforced by Reagan’s firing of the striking air traffic controllers in August 1981; the leader of the striking local was hauled away in chains, a picture that spoke many more than a thousand words. Strikes fell from an average of three hundred in the 1970s to eighty in the 1990s — and twenty-three since. The stock market took off the minute Volcker made it clear that interest rates would fall; investors celebrated the decisive victory of the owners’ contingent in the class war, a party that has continued to this day. That fearful consciousness instilled by Volcker and Reagan persists in the US working class almost forty years later: make no demands, or you might find yourself sleeping on the sidewalk.

There was an international dimension to that class-war victory as well. Capital successfully turned Mexico’s threatened default into a great opportunity to restructure the global economy to its liking. As a condition for getting fresh loans, and indulgence on the old ones, Latin American and other debtors had to agree to open up their economies to foreign capital and trade and lift domestic regulations and subsidies — the entire package of hypercapitalism that would come to be known as neoliberalism. In less than a decade, calls for a new world economic order, one favoring the South, were replaced by an intensified arrangement of rich countries telling poorer ones what to do, down to the level of what basics like food should cost. As with the domestic reconstruction, Volcker was at the center of it.