Bernie Sanders faced ferocious criticism in the media throughout the 2016 primaries — and central to that critique was what the Washington Post called Bernie Sanders’s big black-voter problem. Black voters, we were told, decisively rejected Sanders’s politics — and, by extension, left flank challenges to the Democratic establishment. And the proof was in the polls: overwhelming majorities of black voters preferred Hillary Clinton.

It’s impossible to overstate how much coverage this narrative received in just about every major outlet you can name: the New York Times, the Washington Post (again), Vox, Slate, Time, MSNBC, In These Times, the Atlantic, and so on. In all of these articles, we find variations on the same argument that Joan Walsh rehearsed in the Nation:

Sanders has won whites by crafting a class-based appeal that minimizes, and sometimes even diminishes, the role that racism plays in creating American social and economic inequality . . .  In 2016, all of these calculations have hurt him with the Democratic base.

Was it this — something about his politics — that explained his polling among black voters? That was certainly conventional wisdom among almost all of the media. But in the New Republic, Jamil Smith flagged a different explanation: the Sanders campaign insisted that he was “simply less familiar to voters of color than Clinton.” And this, I noted at the time, was borne out by the data, which showed Bernie’s favorability and preference among black voters rising in direct proportion to his name recognition: 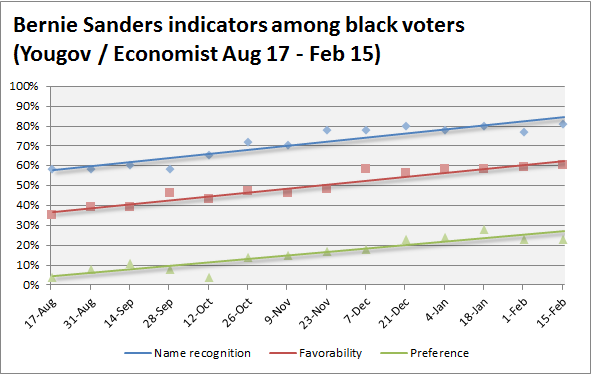 The upshot of this argument, of course, is that black voters were not rejecting Sanders’s message, and that as his name recognition continued to climb, his favorability and preference numbers would climb with it.

The rest is history. By January of this year, it had already become clear that enthusiasm for another Sanders run was remarkably inflected by race — with comparatively strong support coming from black voters. And Friday, a poll from Pew confirms the trend: only 49% of Sanders supporters are white, compared with 56% of Biden voters, 59% of Harris voters, and a remarkable 71% of Warren voters.

The explicit, constantly invoked basis for the 2016 critique of Sanders on race — his strong support among white voters and weak support among black voters — has completely vanished. All of the polling arguments made against him in 2016 now largely apply to his opponents, and the polling arguments made in favor of Hillary Clinton now overwhelmingly apply to Bernie Sanders.

From here, it seems like honest pundits have two options:

Neither, of course, will actually happen. Presumably, some critics of Sanders will continue to live in denial, and pretend that the demographic coalitions of 2016 map directly onto 2019. More often, however, we can probably expect more of what we’ve already seen: conspicuous silence from critics who never really cared what the polls said either way.