The year is still young, but it’s already been a busy one for organized labor. In the education sector alone, Denver, West Virginia, Detroit, Los Angeles, and Oakland teachers have all gone on strike. Walkouts are at their highest level in years.

So, are state legislatures passing restrictive policies because that’s what the public wants? Do people dislike organized labor more now than they have in the past? Short answers: no and no. In fact, in the states where low- and middle-income people feel more positively toward organized labor, restrictive policy is even more likely.

Because labor legislation is often produced in state legislatures rather than Congress, and each state’s economy has developed differently over time, individual states are key to our understanding of organized labor. Methodologically, however, state-level public opinion is difficult to measure because polls are not easily broken into state samples large enough for comparison.

My ongoing project with Joshua Jansa, a political scientist at the University of Oklahoma, tries to overcome these difficulties. It looks at nine specific labor policies (from “right to work” to collective bargaining bans to minimum wage laws) across all fifty states, since 1992.

While labor policy varies considerably across the US — and the South has long had a more restrictive labor regime — states began to adopt increasingly restrictive policies beginning in the 1970s. Over time, these measures proliferated. In 1994, most states outside of the South had one or two of the policies we examine, and that number crept to five or six by 2004. Ten years later, many states had more than five restrictive policies, and some states (Oklahoma, Kansas, Tennessee, Louisiana, Mississippi, and Georgia) had adopted all nine.

Organized labor often lobbies against these policies, even those that don’t directly affect their members, so it is unsurprising that states with low union membership have some of the most regressive laws on the books. Yet we shouldn’t confuse low levels of membership with low levels of support for organized labor. Workers could want to unionize but lack the ability to overcome state or workplace obstacles.

Here’s the lay of the land over time: 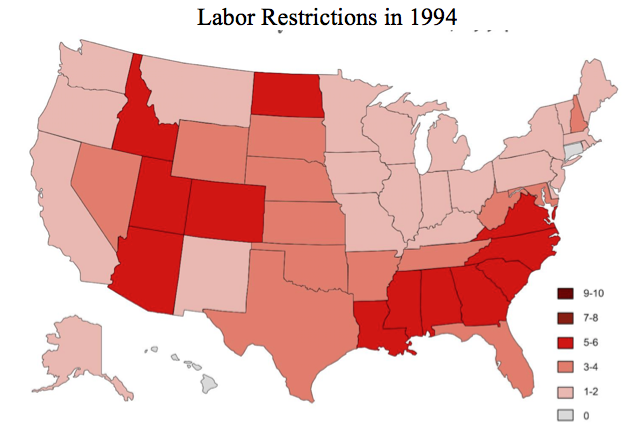 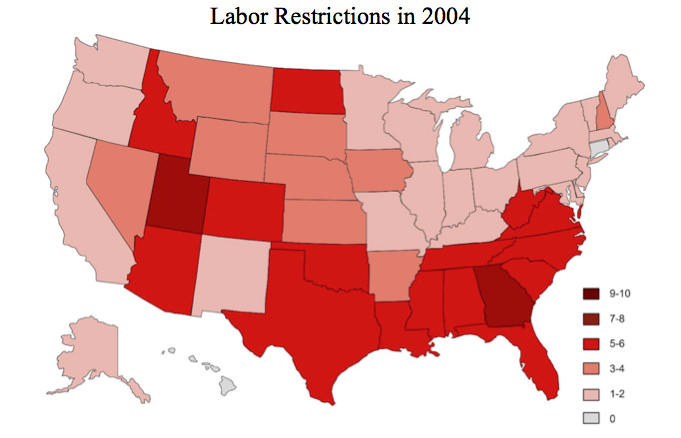 As mentioned, levels of support for organized labor are difficult to quantify using national-level polls. One problem is that US-wide surveys contain more respondents from larger or more populous states. For example, both New York and California contain the highest proportion of unionized workers, so any attempt to assess whether people supported labor unions would be skewed by the geography of the poll’s respondents.

To overcome this problem, our data aggregates all available surveys — from the New York Times/Wall Street Journal to Vanity Fair — that ask both the respondent’s state of residence and a question about support or opposition to organized labor. Questions about support for organized labor vary slightly across survey, but the most common form of the question asks whether a respondent, generally, supports organized labor. Overall, between 1992 and 2014, there were over forty-five thousand respondents across fifty states in these surveys. We then weighted survey respondents based on their race and income to make sure they closely resembled their state’s population in the given year. (While one’s income is not identical to their class position, questions about income are far more common on surveys.)

Overall, support for organized labor remained consistent over the twenty years we studied. In general, in each state, most respondents had a neutral, if not positive view of organized labor.

Simply put, there was no rapid decline in support for labor unions. 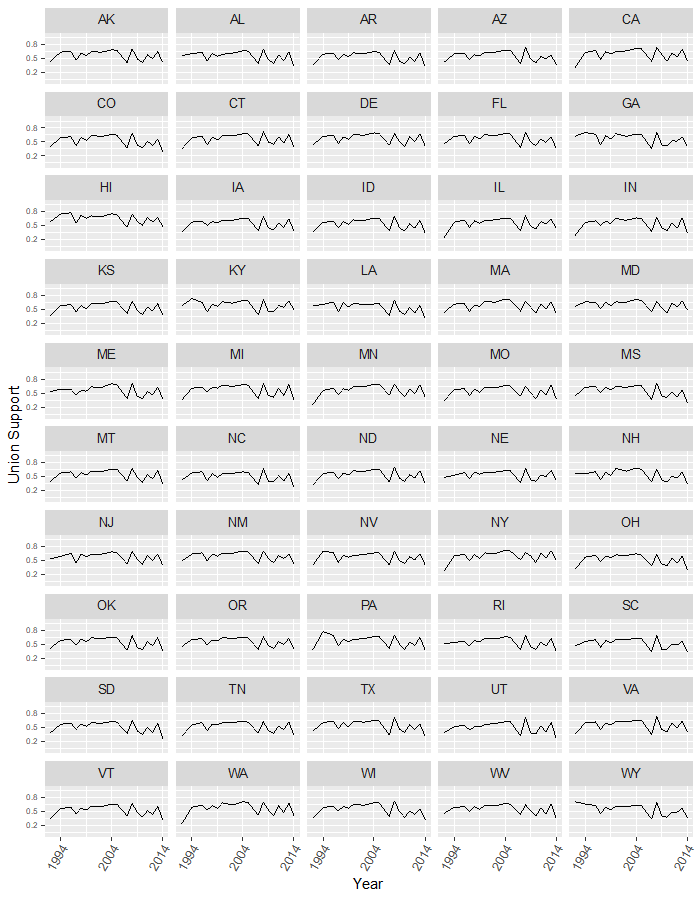 These values, however, are based on averages across groups of people. We would expect views toward organized labor to differ depending on one’s income level. Because labor unions tend to raise worker pay, and decrease manager and CEO pay, people with lower incomes should like labor more. Likewise, labor unions compress labor markets, meaning that those people with middle and lower incomes fare better with a union than without it. Anti-union animus may exist, but we would expect it to be more common among the well-off.

The figure below presents differences in support for organized labor across income thirds. In every state, the top 33 percent dislike labor, and the bottom 33 percent are the most favorable. 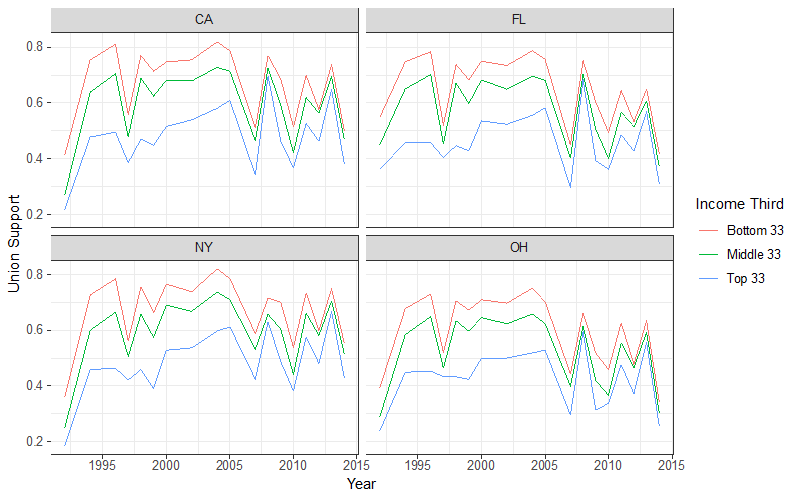 The difference in levels of support between the top and bottom income group varies across states. In Maryland, for example, the bottom 33 percent of workers are very supportive of organized labor (69 percent support), but the top third is less supportive (though still on the positive side of the scale). States that rank lower on support for organized labor are either places where labor unions had a limited level of development (North Carolina has generally ranked among the least unionized states in the country) or places where the gap between upper-income and low-income people is large.

Based on our analysis, we can see that the American public — particularly those with lower incomes — does not dislike organized labor. The states that have adopted anti-worker policies have passed them in spite of, not because of, the preferences of most people.

On this issue, as with others, the US more closely resembles an oligarchy than a democracy. The preferences of those with more money win out over those with less. This is especially true when it comes to economic issues, where the very rich support much different policies than the average person. The nightmare scenario is that state legislatures continue to approve measures designed to weaken labor, which then amplify the power of well-off voices — and, in a vicious cycle, make it easier to approve to still more draconian anti-labor statues.

Workers do not dislike unions. They haven’t disliked them historically, and for the most part they do not dislike them now. But wealthy people and conservative donors sure do — and that, more anything, accounts for the anti-labor policies being passed at the state level.