First posted at Eyes on the Ties.

“AT LAST!! THE PAPER YOU HAVE ALL BEEN WAITING FOR!! WHAT IS THE SNCC RESEARCH DEPARTMENT……”

This was the headline of a February 1965 circular, typed and mimeographed, that went around to chapters of the Student Nonviolent Coordinating Committee — or SNCC, as it commonly went by — across the US.

SNCC may have been the most important organization of the postwar civil rights movement. It grew out of the wave of sit-ins in 1960 and was guided initially by Ella Baker, the foundational organizer whose emphasis on bottom-up organizing and democracy deeply shaped SNCC’s vision and methods.

Its members were on the frontlines of the struggle to dismantle southern Jim Crow, organizing everything from the Freedom Rides to the Albany Movement to the Mississippi Freedom Summer. SNCC members took the movement into the most dangerous areas of the deep South, where white supremacy was most deeply entrenched. They worked to educate and empower ordinary people, and also register them to vote.

But few people today know that SNCC had a Research Department that interacted with organizers on the ground to help guide the group’s strategy and actions. Indeed, as the 1965 memo pointed out, even some SNCC organizers were unaware that they had a research office with a vast archive of news clippings, weeklies, reference books, and other documents that could offer insight into the larger workings of the power structures that were upholding racist oppression in the Jim Crow South.

“Research can support field operations in several ways,” the circular announced to members. Researchers and the stored archives could be useful to SNCC’s Freedom Schools, speakers’ tours, investigations into racial discrimination by businesses, surveys of new areas to organize — even into analyzing the possibilities of organizing a new political party. The announcement asked organizers to make use of the Research Department, send in any requests, and even entertained the possibility of setting up state-by-state research hubs.

What the history of the SNCC Research Department shows is the dynamic ways that research and organizing can go hand in hand, working together, to shape strategy and fight effectively for freedom and justice.

By 1963, SNCC had formed an active Research Department that assembled a huge documentary archive and produced research that informed the group’s campaigns. The SNCC Research Department focused on power analysis to reveal the elite structures that were funding and underpinning Jim Crow. Researchers provided information to field staff to help their organizing campaigns.

A few examples illustrate this interplay between research and organizing, as well as the range of important ways that research helped aid SNCC’s work. As organizers sought to expand the movement, researchers provided information to field staff to help their campaigns.

For example, they put together a pamphlet, “The Mississippi Power Structure,” that analyzed how big money — from cotton farms, northern capital, oil companies, electric power, and finance capital — was invested in the state and how it related to political power and class and racial hierarchies. The document also illustrated how white elites pitted poor whites against poor blacks in Mississippi so they could more easily exploit both groups.

Among other things, the pamphlet analyzed corporate power’s connection to the state’s white supremacist political rule. The pamphlet showed, for example, how Mississippi’s biggest electric company and two biggest banks had overlapping leaders who were also leaders of the White Citizens’ Council that dominated the Democratic Party, the state’s ruling party. SNCC named names and mapped out the ties between these different entities to reveal the flow and interlocks of corporate, racist, and political power in the state.

For example, one powerful figure — William P. McMullan — was a director of the electric company as well as chairman, CEO, and a director of one of the two banks. McMullan was also a board member of the Jackson White Citizens’ Council, which had major influence over Mississippi politics, police, and the courts. Information like this gave organizers a larger and more strategic sense of their targets and the bigger system they were taking on.

The pamphlet documented in week-to-week, day-to-day detail the everyday racist coercion against African Americans and civil rights organizers in Mississippi. With the only text being captions for images and timeline entries, the pamphlet began:

January 1, Greenville, Washington County: Two young white men rode a motorbike through a residential area and, according to the local police chief, fired a volley of shots Into a group of Negroes. George Mayfield, 18, was seriously wounded In both legs; Percy Lee Simmons, 19, was shot in the right leg.

The pamphlet proceeded for 15 more pages with single-spaced, two-column text entries that documented incidents all the way up to the beginning of 1964. The findings of the “Chronology” were also published in Congressional Record on April 4, 1963.

Judy Richardson was a SNCC organizer who worked in the group’s national office in Atlanta and then Mississippi. She believed that the pamphlet helped to convey the systemic, blanketing nature of racist violence in Mississippi. “What it proved,” she recalled, “was that white violence was long-standing and endemic [and] not just the problem of a few racist rednecks.”

In Hands on the Freedom Plow: Personal Accounts by Women in SNCC, Richardson also recalled the dynamic relationship between research and organizing in SNCC:

Then there would be these national staff meetings. Every five months or so, all our staff would come in from the field to share information and also to get some R and R… Most were eighteen- and nineteen-year old women and men, mainly African American, sharing organizing problems, discussing possible solutions, and requesting research from Jack Minnis, our crusty and rather enigmatic white research director. With Jack’s research, SNCC folks went into new communities armed with U.S. Census data and other information indicating the number of registered black voters, if any; the levels of poverty; the discrepancy between federal funding of African Americans as compared to white farmers from programs like the Agricultural Stabilization and Conservation Services (ASCS); and the main industries in the area — and all this before the advent of computers. Our discussions also included references to both the national and international events that were swirling around us.

The SNCC Research Department was also called upon to look into possibilities and strategies for new political projects. For example, some know about the effort by Stokely Carmichael to help start the Lowndes County Freedom Organization (LCFO) in Lowndes County, Alabama in 1965. But fewer people probably know that the LFCO was in part made possible by the research efforts of the SNCC Research Department and the ways it worked with SNCC organizers to bring those findings to life.

By 1965, civil rights organizers were registering black voters by the thousands in Alabama, but the only existing political parties were dominated by whites. In response, SNCC staff, working with local community organizers in Lowndes County, Alabama, started to entertain the idea of forming an independent black political party.

That fall, Stokely contacted the SNCC Research Department about the idea. Researchers proceeded to mine through twelve volumes of Reconstruction-era law books to find an “obscure statute” that would allow for the formation of a new political party.

In his memoir, James Foreman recalled the formation of LFCO, and the dynamic, collective process through which research informed organizing and organizing gave life to research:

Jack Minnis, head of SNCC’s research department, discovered a little-known Alabama law that made it possible for independent political organizations to be formed and run candidates for office under conditions that were technically not difficult to meet. This legal loophole opened the door for the creation later that year of the Lowndes County Freedom Organization, with the black panther as its symbol. Minnis held a number of workshops to explain the whole process. The Alabama people in the Freedom Organization acquired a better understanding of what they were doing, and why, than any other political group that we had thus far developed. A tremendous excitement and new hope began to flow as the black men and women of Lowndes County moved to shake off a hundred years of white supremacy.

In 1967, Minnis also wrote a history of how the LCFO was formed, called “The Story of the Development of an Independent Political Movement on the County Level.” 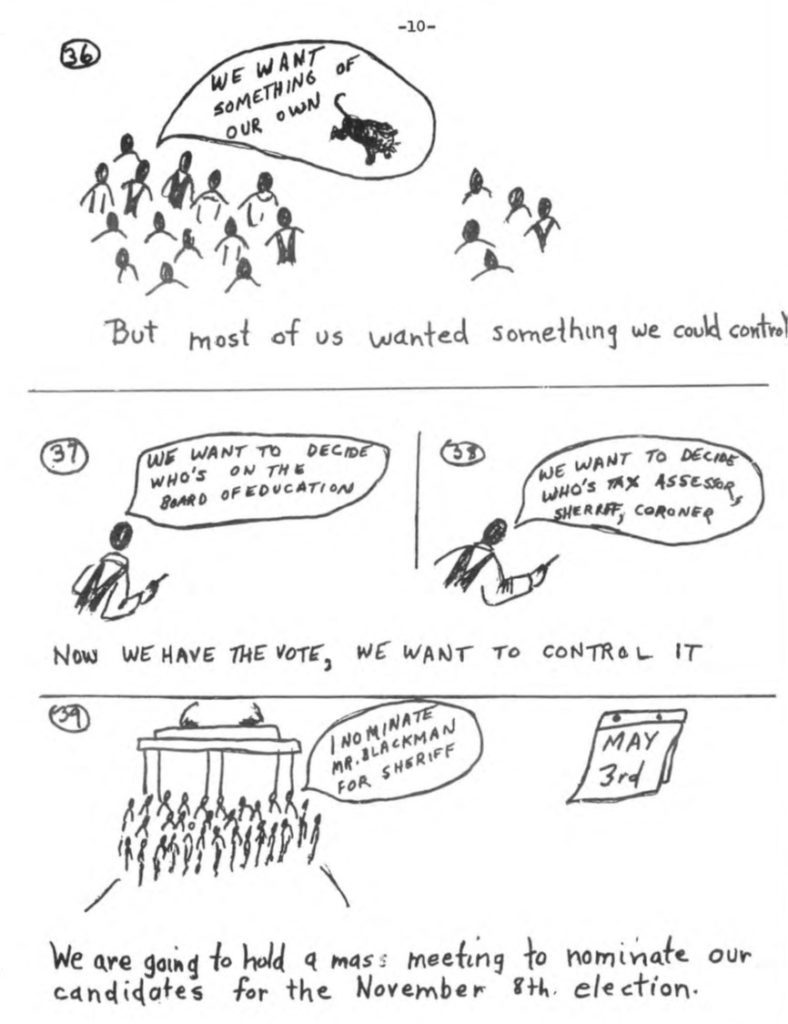 An important lesson from these accounts is the way that the SNCC Research Department produced research that was connected to and concretely aided a living, breathing initiative on the ground by SNCC grassroots organizers. The Research Department conducted workshops with dozens of organizers to help them master the legal statute for running for office with a new political organization. SNCC Researchers also put together informational flyers and “picture-stories” for mass distribution throughout Lowndes County.

In this way — though a combined effort of research and organizing, melded together towards a common goal — the LFCO was able to take off.

Research for the Movement

The history of the SNCC Research Department is an important example of how one of the great social movements of the past used power research to inform its strategies, tactics, and targets.

Years after the height of SNCC’s activity, Julian Bond reflected on the group’s Research Department:

[SNCC] had the best research arm of any civil rights organization before or since. Field secretaries entered the rural, small-town South armed with evidence of who controlled and owned what, and who, in turn, owned them. “Power structure” was no abstract phrase for SNCC’s band of brothers and sisters, but a real list with real people’s names and addresses and descriptions of assets and interlocking directorships, demonstrating how large interests, ranging from Memphis and New York banks to the Queen of England, might own at least partial control of a plantation in Mississippi’s Delta. Knowledge of who owned what was crucial to SNCC’s strategies. From it, we knew that Southern peonage was no accident, but rather the deliberate result of economic policies determined thousands of miles away from the cotton field.

As movements today try to make sense of the complex ways that power works, the SNCC Research Department can serve as an inspiring example of how research and organizing can go hand in hand to make history.