When a reporter asked President Joe Biden on his way out of a press conference whether canceling the first $10,000 of student loan debt was “unfair to people who paid their student loans or chose not to take out loans,” Biden’s surprisingly sharp response was to mock right-wing hypocrisy on the issue. He turned around and asked the reporter, “Is it fair to people who do not in fact own multibillion-dollar businesses if these guys get all the tax breaks? Is that fair? What do you think?”

The contempt displayed by Biden for that question was appropriate and heartening to watch. As jarring as it may be to see the man who spent decades as the “senator from the credit card companies” doing his best Bernie Sanders impression, it was a good moment.

The Right’s hypocrisy on this has been blatant. As the White House Twitter has gleefully documented, a long list of Republicans now claiming to object in principle to people not having to pay off their loans in full took out generous Paycheck Protection Program (or PPP) loans and had far larger sums of money than $10,000 forgiven. And it really is ludicrous to see the same people who want us to be happy for corporate CEOs benefiting from massive tax breaks desperately trying to foment populist resentment against the “unemployed philosophy majors” or “slacker baristas” benefiting from student loan forgiveness.

Even so, if mocking this (very real) hypocrisy is our only response to this talking point, that leaves supporters of student loan forgiveness without anything to say to those ordinary people who are taken in by conservatives’ bad-faith arguments. And it’s not like there are no good responses available to those arguments — especially if we accept (as Biden himself does not) that student loan debt is not only excessively onerous but wrong in principle.

Is It Unfair to Past Borrowers?

Canceling $10,000 of student debt (or better yet all of it) is good because student debt is an obscene concept. Imagine how you would react if someone proposed that public high schools should start charging tuition — but that any student who needed a little extra help and didn’t qualify for enough financial aid to pay for the whole thing could get a loan from the Department of Education (or a predatory private lender) and spend years or decades paying it back when they entered the workforce. To bring the hypothetical closer to the college case, let’s just make that the senior year of high school, so that students would be seventeen when they signed on the dotted line — the same age as a great many borrowers of college student loans.

Ten or twenty or thirty or a hundred years after this dystopian policy was enacted, would you think it was wrong to tell people still struggling to pay off their high school debt that the loan was forgiven because that would be unfair to all the people whose working lives were hobbled by paying it off in the past? Or course not, because you think that no one should have to pay to go to high school and the sooner we can stop making people miserable for having gone in the past, the better.

Any half-decent society would provide education as a public good and collectively foot the bill. It certainly wouldn’t force anyone to go into debt to pay for it. Why on earth that principle is supposed to magically stop making sense during the summer between students’ senior year of college and their freshman year of college is beyond me. 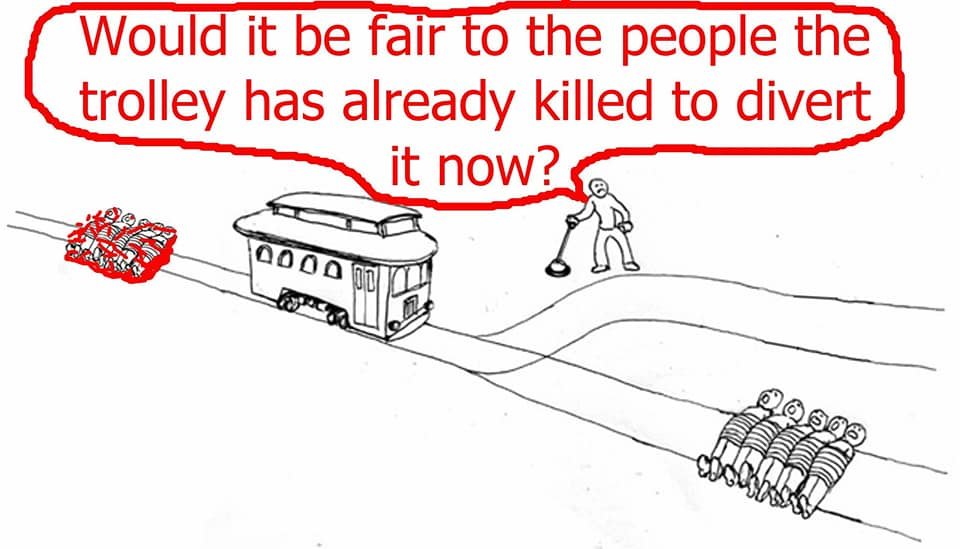 And even if it wasn’t politically possible just yet to reinstitute tuition-free public high school, you wouldn’t worry about whether leaving past high school graduates alone and not continuing to shake people down for payments would create a “moral hazard,” whereby more people who wouldn’t be able to pay off the debt would start going to high school. Because you would think such people had a right to go to high school. Presumably, you’d hope that loan forgiveness would be the first step toward abolishing high school tuition when that became politically possible in the future — but you’d support the debt relief regardless.

There might indeed be a case for some form of reparations for people who were victimized by the nightmarish policy of charging people so much for high school that they had to take out “high school loans” so long ago that their loans were long since paid off (or who found a way to pay their high school tuition upfront), but you wouldn’t think that we should put relief for current victims on hold while we figure out whether that would be possible or what it would look like. Saying that ending an injustice for present victims is unfair to past victims is absurd. You might as well argue that the United States should have stayed in Afghanistan until the end of time, because withdrawing US troops last year was unfair to all the soldiers who died there in the first twenty years of the conflict.

Is It Regressive or Unfair to People Who Don’t Go to College?

What about people who choose never to go to college? Why, some ask, should they have to pay for those who do?

On one level, this is like asking why people who don’t have kids should have to pay for the K–12 education of those who do, or why people who practice fastidious fire safety should have to pay for the fire department to put out everyone else’s fires. Your right as a human being who lives in a society to certain basic public goods simply outweighs the right of those who don’t choose or need to partake of those goods to hold on to every penny in their bank accounts.

One reason that argument sits differently with some people in the case of higher education, as opposed to K–12 education, fire departments, or even Medicare for All, is that, in the society we have right now, the people most likely to pursue higher education tilt somewhat higher-income, so free higher education and student loan forgiveness can be portrayed as a upward redistribution.

Granted, conservatives who lean hard on this point as a populist position in an attempt to rhetorically frame keeping ordinary people in debt for decades tend to wildly overstate the degree of disparity. While there’s obviously an important difference between taking some classes at a community college and, say, getting a master’s degree, a large majority of adult Americans have at least some college under their belts. And a significant percentage of nurses and a majority of public-school teachers actually have master’s degrees.

Even so, it’s true enough that only about 38 percent of Americans over twenty-five have four-year degrees, and that you’re less likely to even try to do this if you come from a poorer background. Does this mean that helping people financially to get a degree is regressive and therefore bad?

The first thing to consider is that there’s a depressing circularity at work here: one of the reasons that people from worse-off backgrounds are less likely to pursue college degrees is that they’re concerned about whether they’ll be able to pay it off — and navigating the often byzantine bureaucracy of need-based financial aid can be off-putting in itself. Using this as a reason to keep things as they are is at least a little bit like saying that it would be unfair to institute Medicare for All and hence pay for everyone to get preventative medicine because right now people from higher-income backgrounds are more likely to go to the doctor enough to get preventative care. We want a society where everyone with any inclination to do so feels able to go to college because, like health care, education is a basic human good.

It’s also worth noting that people from worse-off backgrounds who go to college are more likely than their classmates from better-off backgrounds to be weighed down by student debt. As is true in many areas, racial statistics are an imperfect but striking stand-in for trends about how resources are distributed in general — while a far lower percentage of black than white Americans over twenty-five go to college in the first place, black students tend to accumulate far more student debt.

In at least the cases of a great deal of the student debt owed by a great many borrowers, there’s also no redistribution issue at all, since the Department of Education was never going to see that money in any case. The question for all too many borrowers was only whether those loans were going to be forgiven now or after they died.

With all that said, though, forgiving only student debt can feel unfair for a slightly different reason. An awful lot of people are struggling with many different kinds of debt, and student loan debt is far from being the only kind that’s not only onerous and immiserating but objectionable as a matter of basic principle. Anyone concerned that the benefits of canceling even $10,000 of student debt (never mind canceling every penny) won’t spread to enough of the population should have no objection to combining this with a broader program of debt cancelation.

The obvious place to start would be medical debt. In the last five years, “more than half of U.S. adults report that they’ve gone into debt because of medical or dental bills,” according to a recent poll. Even if you hold the (frankly contemptible) belief that a college education is a frivolous luxury that is irresponsible for lower-income people to pursue, do you really think the same is true of, for example, having a medical emergency when the nearest hospital to you is “out of network” for your insurance? How about having complications when your kids are born that add up to a massive bill when you get back from the hospital?

Again, the point of principle here is very simple. No society that treated its citizens with a modicum of human dignity would shake them down for a payment at the point of service for medical care rather than paying for it collectively and providing it as a right. Medical debt, like student debt, shouldn’t exist.