There was a lot of good news for the Left after the first round of the Colombian presidential elections on May 29. A comparative analysis of the data for the last two elections (2018 and 2022) shows the political strength of left-wing candidate Gustavo Petro and his running mate Francia Márquez.

In our view, the first-round results confirm that Petro still has a good chance of winning the presidency if he is able to capitalize on his strengths and rapidly adjust his strategy to confront an unexpected and unconventional opponent: the insurgent right-wing populist Rodolfo Hernández.

A Shift to the Left

Petro’s rise this year began when his political party, Pacto Histórico (Historic Pact), received the most votes in March’s congressional elections. This was the first time the Left had ever won the highest vote share for Congress. Petro went on to win the first round of the presidential election with around 8.5 million votes, or 40.3 percent. This was a major improvement on 2018, when Petro placed second in the first round with 4.8 million votes, or 25 percent.

Most impressively, Petro flipped 127 municipalities (more than 10 percent) that had voted for the right-wing candidate Iván Duque in 2018’s first round. These districts were mostly concentrated in the western part of the country, the south, and the Caribbean. Petro also took another 39 municipalities where rival candidates had won in 2018, adding up to a total of 166. 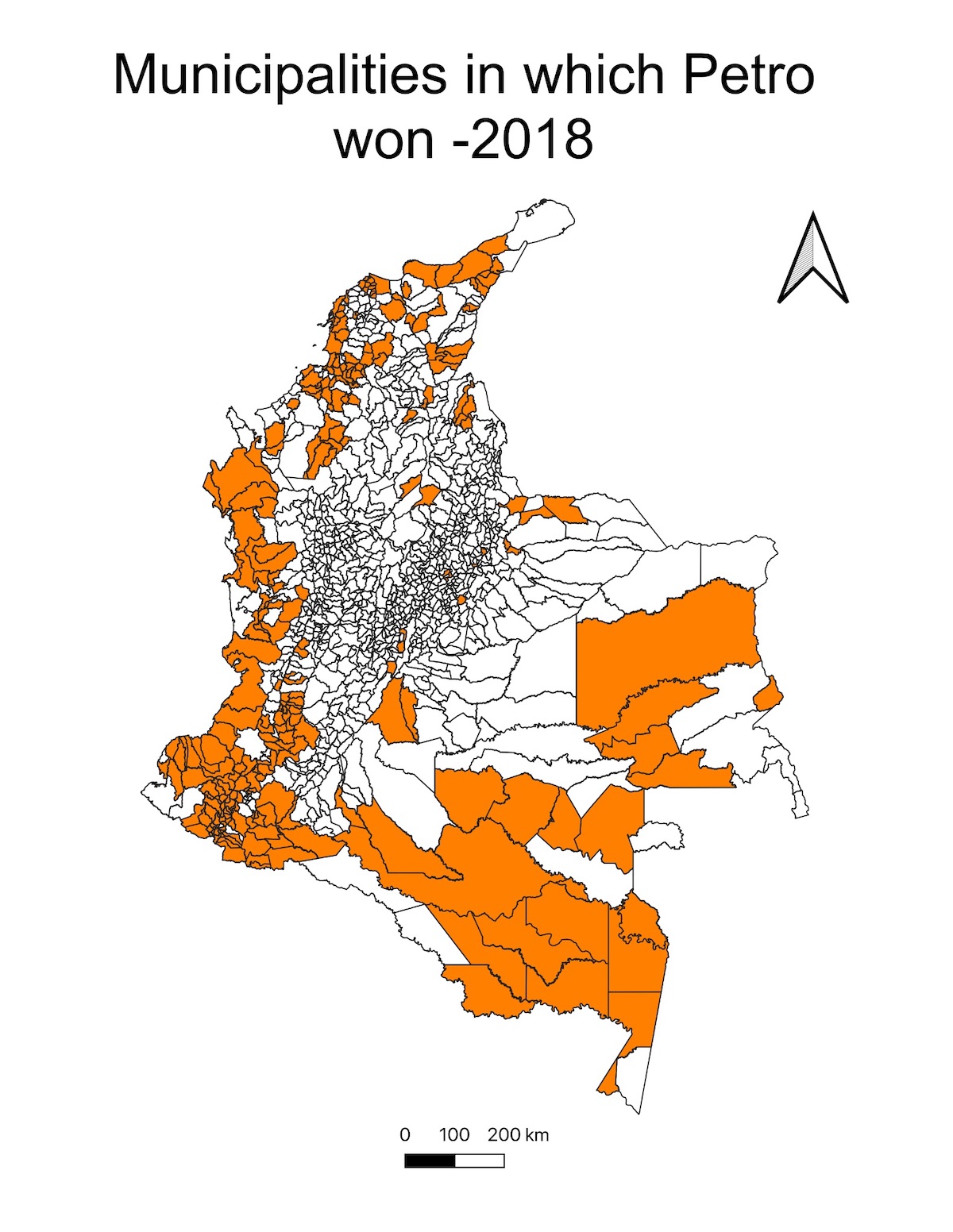 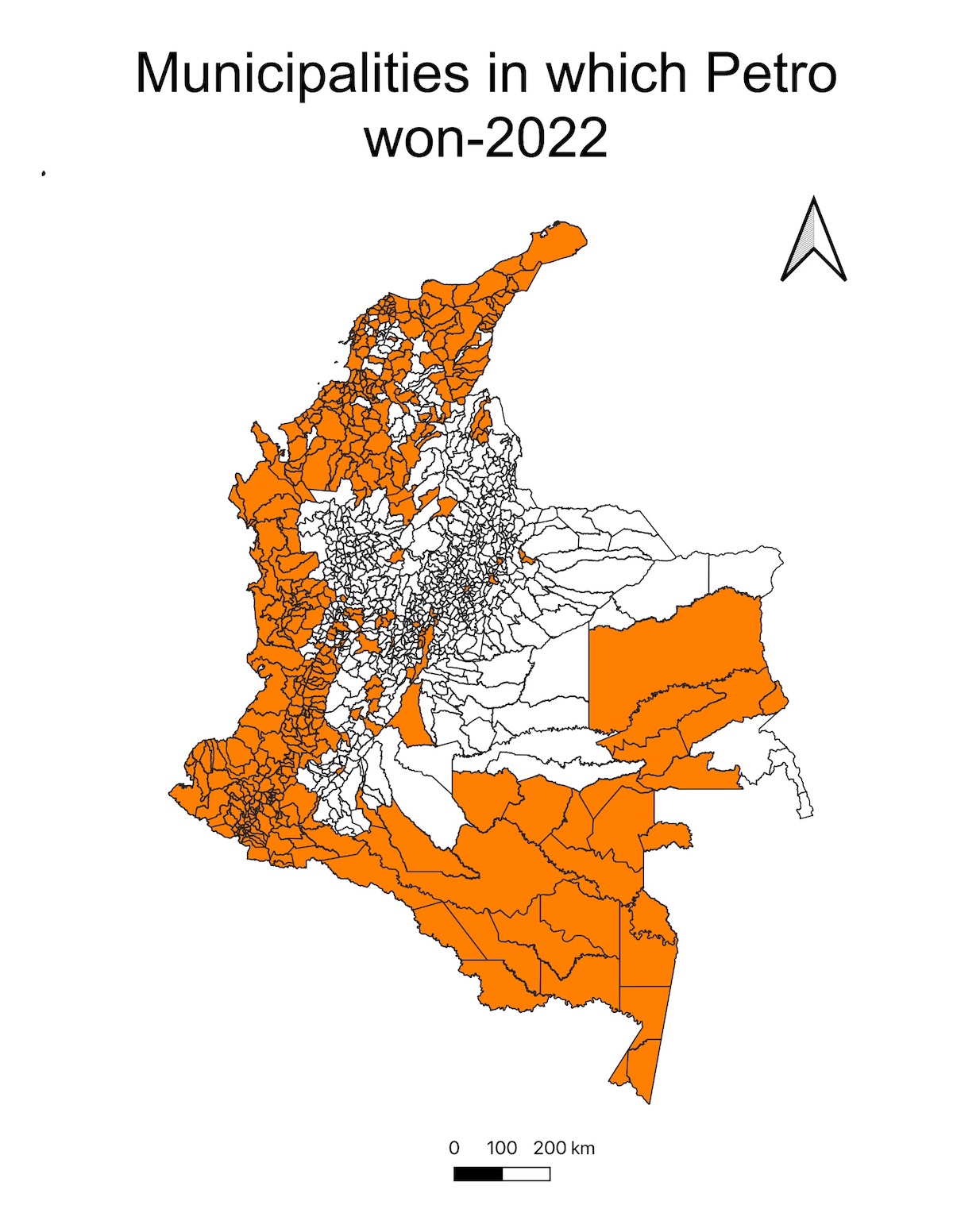 The Petro-Márquez ticket came first in cities like Bogotá, Cali, Barranquilla, Cartagena, Santa Marta, Valledupar, Ibagué, Neiva, and Pereira, and received overwhelming support in Colombia’s most marginalized and rural zones. Our statistical analysis, which received assistance from Laura Ortíz of Colombia’s Universidad de los Andes, shows a strong correlation between Petro’s vote share and the percentage of people living in poverty at the municipal level. This correlation was already visible in 2018, but this year it was more pronounced. 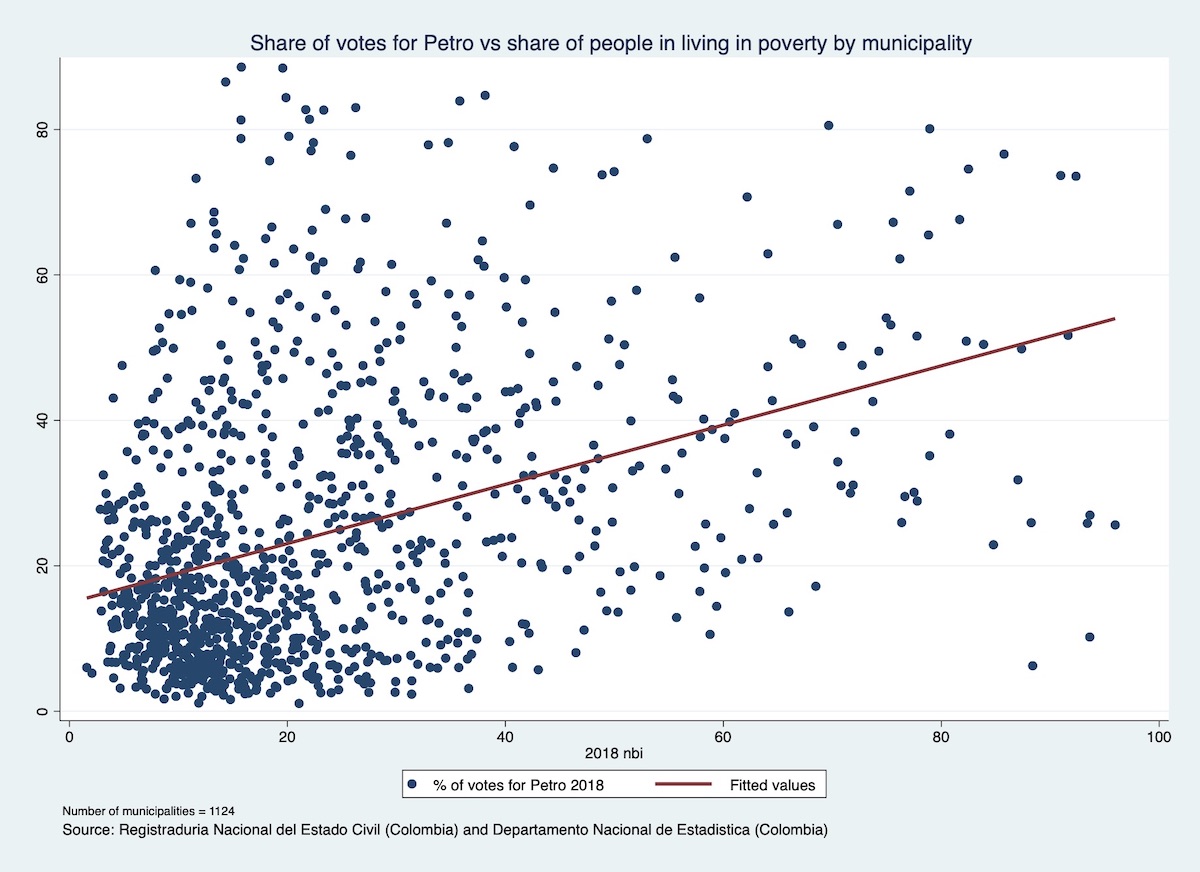 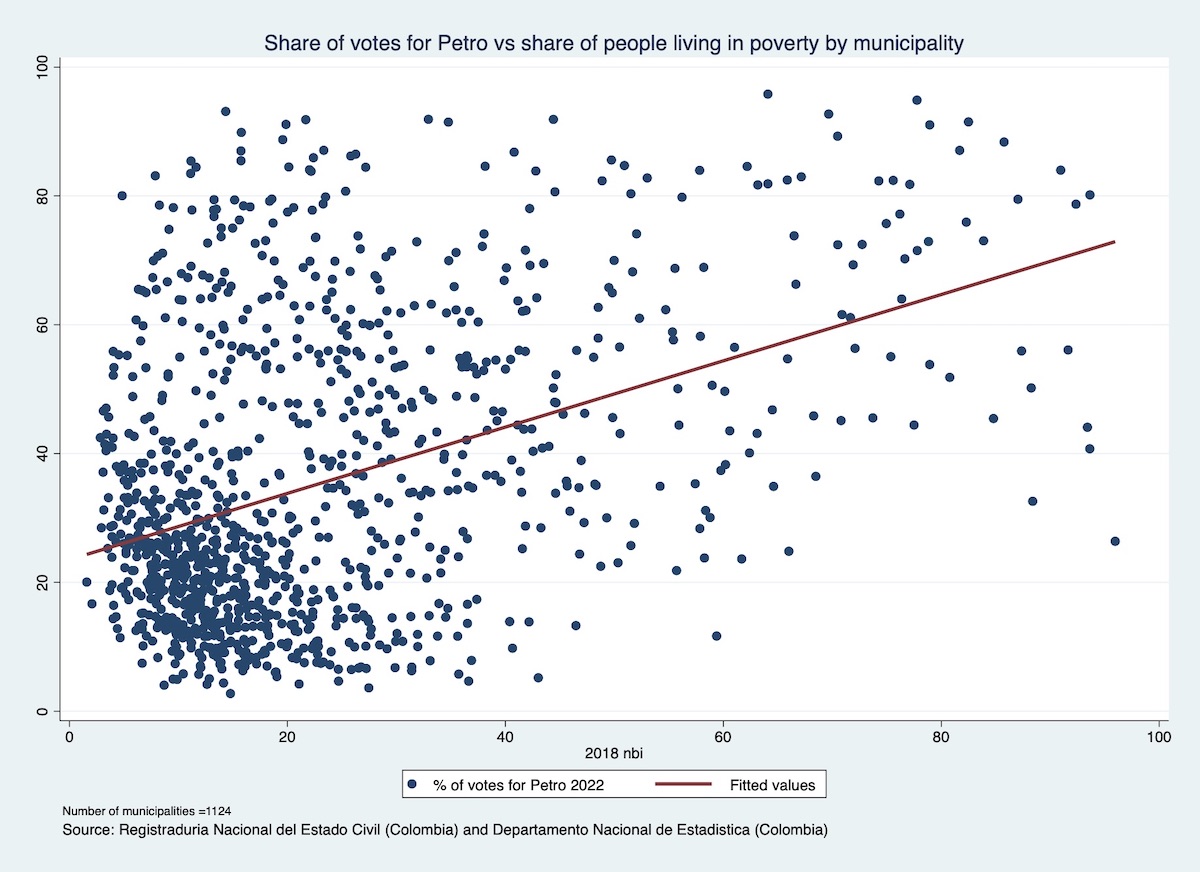 In the poorest regions of Colombia, such as La Guajira, Cauca (where Francia Márquez is from), and Nariño, Petro won all the municipalities. In Chocó, another traditionally neglected region, he came first in all but just one municipality. With majority Afro-Colombian and indigenous populations, these regions voted most enthusiastically for progressive change. They hope that a Petro-Márquez victory will make the national government attentive to their social needs and demands and give them representation in the national government for the first time.

Petro’s first-round victory may not have been surprising, since his polling scores during the campaign averaged 40 percent. However, it is still a historic achievement in a country where the Right has long used extreme violence to eliminate the Left or keep it from gaining power by democratic means at the national level. Both Petro and Márquez have themselves faced the threat of assassination.

In the poorest regions of Colombia, Petro won all the municipalities.

The real surprise of the election was the breakthrough for Rodolfo Hernández in second place with 5.9 million votes (28.1 percent), edging past the establishment right-wing candidate Federico Gutiérrez (5 million votes, or 23.9 percent). As a result, Petro now faces Hernández in the runoff vote due to be held on June 19 to decide the presidency.

The defeat of Gutiérrez revealed how much antiestablishment feeling there is among the Colombian electorate. It also presents an additional challenge for the Petro-Márquez campaign. Gutiérrez had the support of the traditional political parties as well as the implicit endorsement of the current, deeply unpopular president Iván Duque, which made him an easy target for criticism. Hernández, in contrast, emerged as an outsider, capturing part of the dissatisfied electorate that Petro expected to win over in the second round.

Hernández is a seventy-seven-year-old business tycoon and former mayor of Bucaramanga, a city of half a million people in eastern Colombia. He took advantage of the traditional Colombian right’s political decline to surge in the polls with a simplistic, populist, and TikTok-fueled “anti-corruption” and “anti-system” message. It was the same kind of strategy that previously succeeded for antiestablishment right-wing populists like Donald Trump in the United States and Jair Bolsonaro in Brazil.

As with Trump and Bolsonaro, Hernández’s rhetoric flies in the face of his own track record. He is mired in a corruption case of his own for irregularly awarding contracts when he was mayor, for which he will face trial on July 21. If found guilty, he may not even be able to take office.

In another nod to Trump, Hernández boasts about his wealth and has promised that he is not running for the presidency for personal gain. He also projects an authoritarian, macho persona by using foul language, giving the false impression that he is a “straight talker” instead of the dishonest blusterer that he actually is. Hernández even punched a member of Bucaramanga’s city council for questioning him about another corruption case involving his son.

These antics certainly appeal to many politically disaffected Colombians who are angry with the establishment. However, Hernández’s base does not appear to be as loyal to him as that of Trump. This means that some of his first-round voters could well change their minds.

This divergence may work to Petro’s advantage. His own base is more solid, and he has real proposals to offer Colombians on a variety of important issues. Hernández’s vague attacks on corruption merely serve to distract the public from his authoritarianism and lack of concrete policies.

Petro’s detractors accuse him of being a ‘Marxist terrorist,’ but it is Hernández who has already revealed himself as authoritarian.

On economic policy, for example, Petro has proposed new mechanisms to redistribute land so that agricultural productivity can increase. He has also emphasized the need to accelerate the clean energy transition and reduce Colombia’s dependency on oil exports, and has proposed raising taxes on the four thousand richest families to make the country’s tax system fairer to the majority. While the Colombian right claims that Petro would bankrupt Colombia and turn it into another Venezuela, his tax agenda is in fact quite conservative, prioritizing fiscal responsibility and macroeconomic stability to secure revenue for the government to spend on social programs.

Hernández, on the other hand, has no specific and elaborated programs to offer. His lack of support in Congress and his authoritarian character would make it very difficult for him to govern as president. Petro’s detractors in both Colombia and the United States accuse him of being a “Marxist terrorist,” but it is Hernández who has already revealed himself as authoritarian he could prove to be. He has proposed dissolving Congress for the first three months of his presidency and has even started to issue draft decrees to eliminate several state offices.

The reckless or bizarre words and actions from Hernández don’t stop there. He has lurched from proclaiming himself to be a fan of “German thinker Adolf Hitler” — he later claimed that he meant Albert Einstein — to promising to reduce the price of gas and tolls by half so that everyone can visit the coast. Hernández has also indulged in misogynist outbursts, asking why women should even serve in the government instead of staying at home, and describing Venezuelan women as “a factory of poor children.”

The Safe Option for Colombian Democracy

With Hernández now facing greater media scrutiny of his record and proposals, paradoxically it is now Petro — who has long been accused by his right-wing opponents of authoritarianism and radicalism — who represents a safer, more institutional, and more democratic option of change than Hernández. Although Hernández has rallied the support of Colombia’s traditional establishment, he offers no assurance that democratic rules will be respected, nor any commitment to strengthen Colombian public institutions and democracy.

With Gutiérrez out of the running now, traditional right-wing politicians were quick to endorse Hernández. Gutiérrez himself announced he would vote for Hernández as soon as he knew the results. Former president Álvaro Uribe and members of his party Centro Democrático also rapidly announced their support for Hernández.

There has been a greater division of opinion among centrists. Sergio Fajardo, the centrist candidate who placed fourth, has expressed more sympathy for Hernández than for Petro. However, his vice presidential running mate, Luis Gilberto Murillo, has joined Petro’s campaign. This is a significant departure from 2018, when Fajardo told his supporters to cast blank ballots, which benefitted Duque and hurt Petro. With this realignment of political forces, Hernández faces the contradiction of presenting himself as the antiestablishment “candidate of change” while at the same time having been endorsed by the very politicians and parties who epitomize that establishment.

Hernández is presenting himself as the antiestablishment ‘candidate of change’ while being endorsed by the very politicians and parties who epitomize that establishment.

In a different way, Petro could now appear as an establishment figure, having served in Congress for decades. But the Colombian left has always been excluded from the presidency by force or other extralegal measures, so Petro may be able to present himself more convincingly as an antiestablishment candidate than Hernández. This is even more true of his ally Márquez, who has never been a member of Congress.

In this sense, Petro’s campaign bears some resemblance to that of Bernie Sanders during the US Democratic Party primary elections of 2016 and 2020. For much of his career, Sanders was an independent and self-identified socialist, and he joined the Democratic Party as the only viable way to have a chance at winning the presidency. In the process, however, he became part of the traditionally corporate-backed two-party duopoly against which he campaigned.

The first-round results initially provoked some pessimism in left-wing circles in Colombia and abroad. However, the first opinion polls since the first round show that Petro and Hernández are statistically tied for the runoff. For Petro and Márquez to win, regional dynamics will be important. The Pacto Histórico campaign needs to quickly settle on a new strategy.

This may consist either of increasing their first-round margins in areas where they already did very well, such as Bogotá, the Caribbean, and the Pacific, or competing with Hernández for voters in potential swing regions, such as Boyacá, Huila, Tolima, and Cundinamarca. Although Hernández won in these regions, it was not by a significant margin.

Ideally, the Pacto Histórico should aim to do both, but time is scarce, and the range of possible strategies shrinks by the day. In the first round, the chief motivation to vote for the Petro-Márquez ticket was hope for a more egalitarian society. This time, Petro’s voters are likely to be motivated as much by the need to preserve the minimum standards of an already flawed Colombian democratic system.

In other words, this presidential runoff is looking like the upcoming Brazilian election between Luiz Inácio Lula da Silva and Bolsonaro. However, unlike Lula, who has moved to the center since he was last president, or Joe Biden when he ran against Trump in 2020, Petro won’t merely protect Colombia’s electoral democracy against a far-right threat. He is also likely to push much harder than either Lula or Biden for progressive social change.