For all the discourse churned out in the inflation debate over the past year, there’s one question that’s gotten almost no attention: Why is inflation bad, if it’s bad?

It’s an urgent question right now, because an earnest debate is underway as we speak, among central bankers, financial journalists, Wall Street analysts, and the like about whether, over the next six months or so, the Federal Reserve should more or less deliberately trigger a recession in the interests of tamping down inflation.

Any policy decision has costs and benefits. For the more vulnerable sections of the working class and working-class places, the cost of a period of job scarcity is a lasting — often permanent — residue of pretty much every kind of misery: poverty, drug addiction, chronic physical pain, school failure, broken families, mental illness. For young college graduates, it’s stunted career prospects. For the general population it’s consistently lower levels of expressed life satisfaction. (I’ll leave aside for now the consequences for the working class as a class-for-itself, a parochial concern of socialists.) All of this is now amply documented in sprawling social science literatures on job ladders, unemployment “scarring,” subjective well-being, and so on.

You might think, then, that those now urging the Fed to move aggressively against inflation despite the risk of a painful downturn, would be waving around some countervailing list of inflation-spawned horrors that — at least according to them — could be expected to result if prices were allowed to keep rising as they have been. That’s how policy debates usually go.

But, nine times out of ten, if there is such a list, it turns out to be a recital of anecdotes about this or that demand-congested market, as if the demand congestion were a horror in itself. Posing the simple question, “Why is inflation bad, if it’s bad?” to someone baying night and day for sterner measures against inflation results not infrequently in verbal excursions like Ted Kennedy’s infamous gambol, when he was asked the equivalent question while running for president: “Why do you want to be president?”

But in recent months we’ve heard with increasing frequency an anti-inflation argument for which, at least, it can be said that it isn’t trivial. It’s become a staple of Democrats-in-disarray political journalism, and even some actual economists, like Jason Furman, seem at least to wink at it. It’s the claim that inflation of the kind we’re now experiencing is bad for working people because it eats away at real wages.

There are, of course, other ways, besides real-wage erosion, that inflation could — and in fact, historically, has — hurt the working class, so demonstrating that this particular claim is wrong doesn’t prove that inflation is benign. (I’ll be attempting a more global assessment of that question under separate cover.)

But the claim *is* wrong. Not a little bit wrong; completely wrong.

To imply that a rising price level in the aggregate reduces the amount that people can buy is as stupid as calling the cataclysmic deflation of 1929–33 a bargain bonanza for shoppers. As James Tobin wrote decades ago, “it is simply vulgar nonsense — no less for constant repetition by economists, politicians, bankers, and journalists — to say that an internal self-contained inflation causes per se a loss of economic welfare in aggregate.”

Further, in an economy like ours, inflation can only be sustained over time if the demand for labor is strong enough, relative to the supply, to force employers to continually bid up wages. In such situations, wages tend to rise faster than profits, and faster for the bottom-rung jobs than for highly-paid ones. 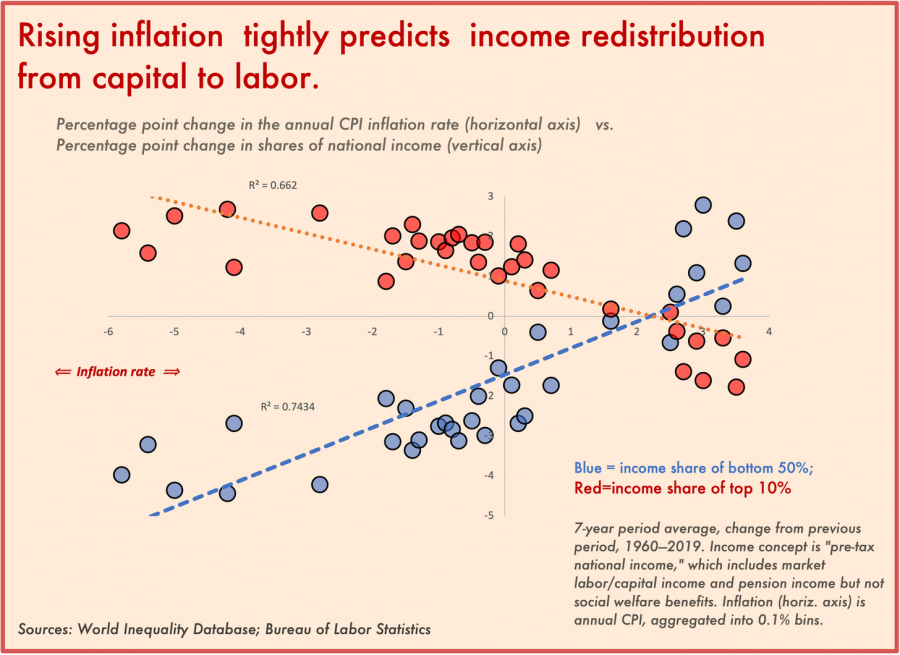 The chart above shows the actual empirical relationship between inflation and income distribution. It plots the percentage point change in the seven-year annual inflation rate from the preceding seven-year period (horizontal axis) against the percentage point change in market income shares for the bottom 50 percent and top 10 percent over the same interval (vertical axis).

(The distribution data are shares of “pre-tax national income,” from Thomas Piketty’s World Inequality Database; they include regular market income plus pensions, but not non-pension social benefits. The inflation numbers are the twelve-month change in the Consumer Price Index.)

In sum, not only is the relationship between inflation and working-class incomes positive, not negative, the strength and consistency of the relationship is pretty extraordinary — it surprised even me.

So by all means, let’s talk about the potential costs of inflation, alongside those of policies to combat it. But in the interests of discursive hygiene, let’s rule out from now on the pernicious and false talking point that inflation is bad for the incomes of the working class. (Unless I screwed up somewhere, let me know if you spot anything.)