In the early twentieth century, French artist Jean-Marc Côté and a number of collaborators produced a collection of images meant to depict the year 2000 as they imagined it. Because of financial difficulties, the En L’An 2000 series was never actually distributed, only coming to light thanks to its publication by science fiction writer Isaac Asimov in the 1980s. Though you might not exactly call it utopian (the future, as imagined by Côté and his associates, still seems to include war) a theme that still runs throughout is the emancipatory potential of technology — not only to make daily life more efficient and convenient but to free people from the grind of having to perform laborious tasks. 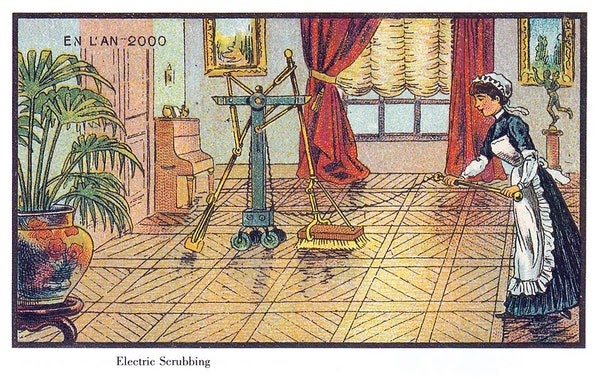 In Electric Scrubbing, a robot sweeps and polishes a floor while a maid looks on. In The New-Fangled Barber, patrons sit in relaxed poses while a machine works on their heads — the hairdresser operating the entire salon from a single terminal. In A Very Busy Farmer, a farmer effortlessly manages large-scale agriculture from the comfort of his porch. Several other images depict people enjoying various states of leisure, their downtime itself made easier by the presence of technological wonders and automation. 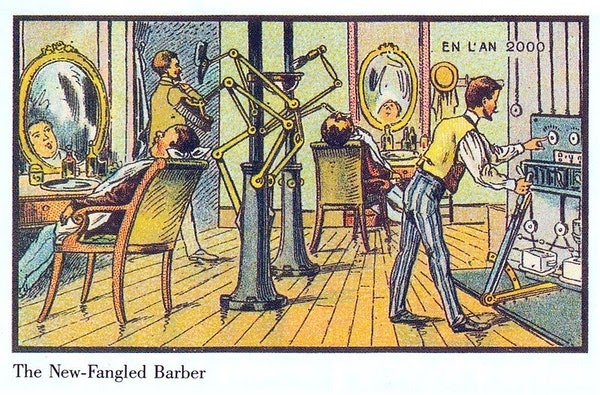 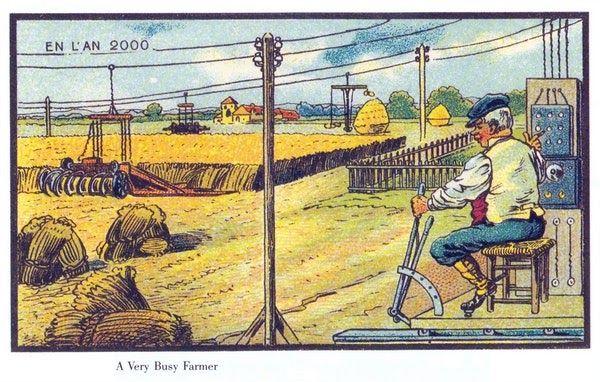 Decades later, this popular image of the future largely persisted — machines becoming capable of extraordinary things, but also of reducing human labor and increasing leisure. During the 1950s, Detroit-based cartoonist Arthur Radebaugh wowed millions of readers with his column Closer Than We Think, which featured not only images of humanity in space but also depictions of warehouses and farms run through automation. “Much of Old MacDonald’s farm can be run by radio-controlled push buttons,” reads the caption from one of Radebaugh’s famous strips. “A floating tower will oversee a swarm of robot implements and tractors operated by electronic command.”

As is the case with all but the most imaginative futurist thinking, the remarkable images handed down to us by artists like Côté and Radebaugh don’t have a great deal to say about political economy. Their implicit assumption, which seemed reasonable enough at one time, was that technology would simply render many of the big questions traditionally associated with politics and economics obsolete. With the benefit of hindsight, however, we can see the error in this kind of techno-utopianism. Just as many futurist artists predicted, the pace of technological progress throughout the twentieth century indeed proved extraordinary — machines, in fact, becoming capable of performing many of the functions they once imagined and daily processes of every kind, from communications to manufacturing to domestic labor, all growing exponentially easier and more efficient. 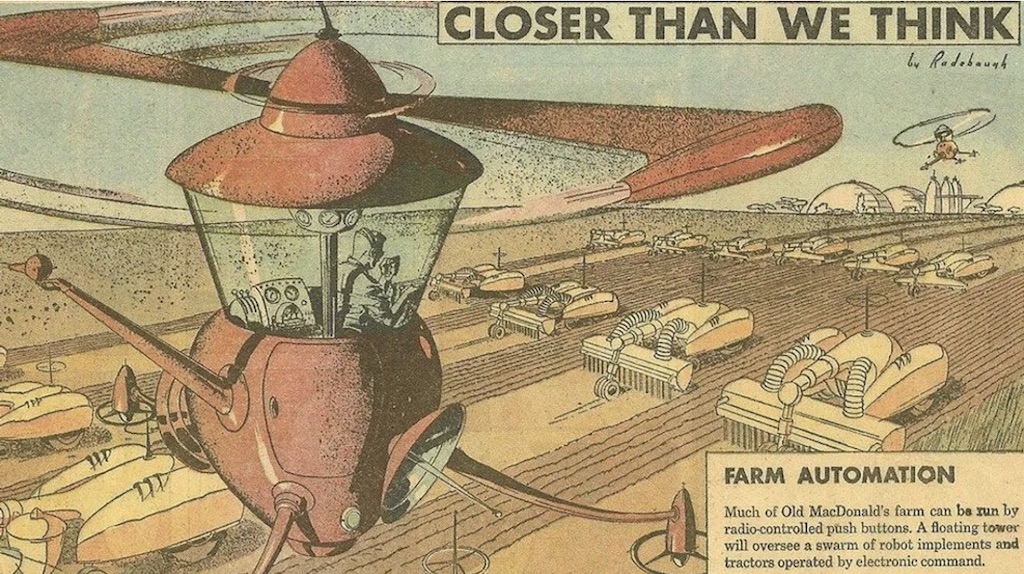 Needless to say, the once-promised society of leisure has yet to come about: twenty-first-century life remains a bounty of leisure only to the exorbitantly rich. Even in wealthy societies, life for millions is still defined by economic precarity, grueling and unrewarding employment, and, of course, the near-daily grind of hours spent earning enough to survive. Though technology is hardly the only culprit, one reason is that automation — just as the futurists predicted — has rendered an unthinkable number of jobs obsolete. When a task or process can be easily automated, no remotely efficient economic model is likely to deem it preferable for a human being to perform.

The problem in a capitalist society where most live off a wage is that people still need employment to survive. To that end, all kinds of jobs are created that simply wouldn’t exist in a world where power and resources were owned and distributed more equally (the call center where I once made less than eight dollars an hour to badger low-income households on behalf of Discover Card being a good case in point). In the short term at least, something like the federal jobs guarantee found in Bernie Sanders’s Green New Deal proposal could reallocate much of this labor and give tens of millions of workers better compensated and more socially valuable work to do. 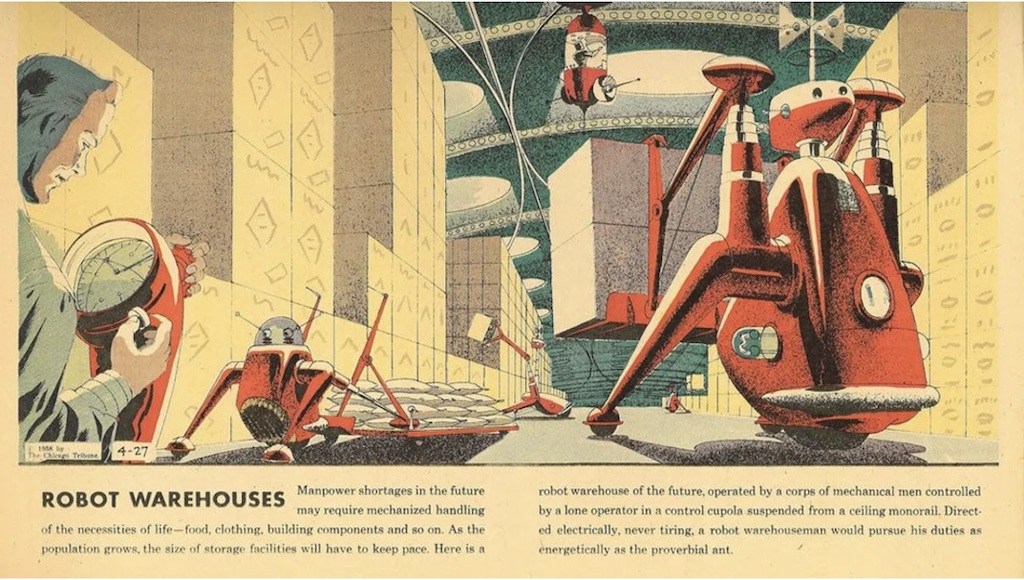 Notwithstanding the question of bullshit jobs and the progress of automation, it’s difficult to imagine a society without at least some tedious and unrewarding work to perform. A device like the self-checkout machine, for example, may put many store clerks out of work, but will probably never fully replace the need for human supervision of consumer shopping. In the near future, however, the problem really is one of employment: people who once earned a living at a grocery store or pharmacy checkout being deprived of their income and having to look elsewhere for work (work which almost certainly promises to be exploitative, tedious, and poorly paid).

Which brings us back to the marvelous images created by artists like Jean-Marc Côté and Arthur Radebaugh, the self-checkout machine being practically plucked from their now bygone visions of the twenty-first century. As these futurists saw it, technology would eliminate all kinds of boring and arduous work — making life easier for human beings and freeing up labor time in the process. Today, the self-checkout machine represents the paradox of technology and automation under capitalism: the very tools that could make life simpler and more rewarding threatening workers’ livelihoods and, in many cases, actually expanding the power of bosses to surveil and mete out discipline in the interests of profit.

It doesn’t have to be that way, of course. An economic model more structured around the provision of social needs would guarantee as rights many things we now largely consider commodities or even luxuries — from housing and health care to leisure time and higher education. With the vast collective wealth of our civilization distributed more equally, workers of all kinds currently suffering the crippling boredom and ennui of offices and warehouses would be freer to enjoy life without the constant threat of financial ruin and personal despair.

Under capitalism, technology and automation destroy jobs. In a socialist society, both could make real the futurist vision and offer untold leisure to all.