I’m the host of a podcast and YouTube show called Give Them An Argument (GTAA). Last month, a thumbnail was removed from one of our videos. It was a clip from my interview with left-wing YouTuber Natalie Wynn (“ContraPoints”). The email from YouTube claimed that it violated their “Sex and Nudity” policy. I’m about to show you the image. I’d say that prudes should avert their eyes but…well… 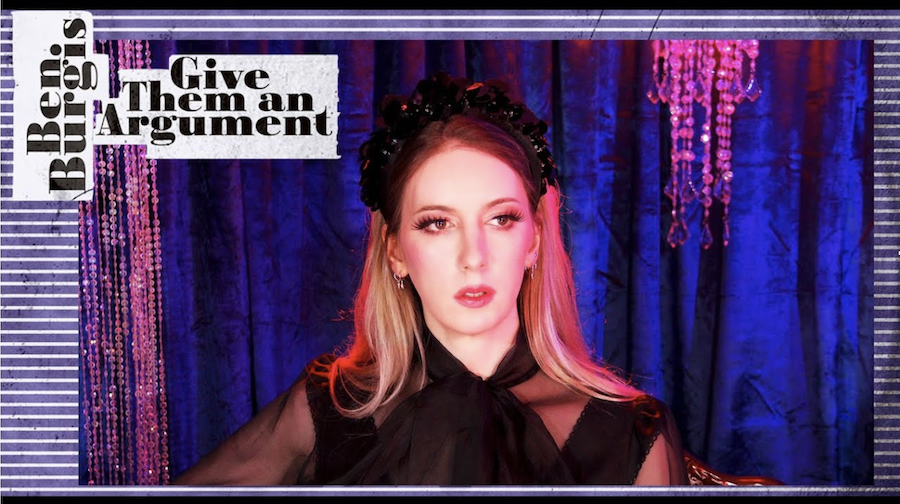 There are at least two odd things about this. First, Natalie is fully clothed in that image. Second, it’s just the GTAA frame around the same profile picture she uses for her wildly popular YouTube channel. YouTube’s censorship machine has never come down on her for using it. So what happened?

I have no idea, because YouTube wouldn’t tell me. The company eventually reversed its decision but never explained to me how the image came to be taken down in the first place.

Very annoying, but maybe just a misunderstanding or algorithmic glitch. Yet a few weeks later, a mob of hardcore Trump supporters stormed the Capitol in a last-ditch attempt to overturn the 2020 election. I hosted a livestream about it with philosopher Ryan Lake, historian Djene Bajalan, my producer Forrest Miller, and poet and left-wing commentator C. Derrick Varn. To put it mildly, none of these people are Trump supporters. In fact, a fair amount of the stream was spent parsing the issue of whether Trump supporters technically counted as “fascists.”

All of that made it more than a little surprising when, about a week later, YouTube removed the video… on the grounds that we were promoting Trumpist conspiracy theories about the election. The email from YouTube claimed that we’d violated their terms of service by posting content “that advances false claims that widespread fraud, errors, or glitches changed the outcome of the U.S. 2020 presidential election.”

We filed an appeal the night that the stream was taken down. We have yet to get any sort of response.

It’s a problem that the standards we have are arbitrarily arrived at and opaquely applied by private companies whose primary allegiance is to making money rather than serving the public good.

About a week after that, I was put in what’s come to be known as “Facebook jail” for several days. I could read posts, but I couldn’t interact with them. I could receive messages but I couldn’t respond to them.

I’d posted the YouTube stream on Facebook, so there might be a connection between the stream being taken down and the Facebook “jailing.” Or the two could have been entirely unrelated. Facebook told me that I’d violated “community standards” in some way but didn’t tell me how I’d violated them or even what post got me in trouble.

The fact that I was being “jailed” for the first time since I started my account fourteen years ago, and that this happened while all the major tech platforms were ramping up censorship after the Capitol riot is suggestive, but it could have been a coincidence. One of the most frustrating things about this sort of tech censorship is that there’s simply no way to know what’s happening behind the curtain.

Does any of this matter? It’s certainly an inconvenience for podcasters and streamers like me, but that surely ranks very low on any list of injustices worth losing sleep over. But these companies’ actions do matter. Social media is a key part of the information commons of the twenty-first century, but it’s been enclosed by private companies.

Even if the right standard for what should or shouldn’t be sayable on the digital commons falls somewhere short of free speech absolutism, it’s a problem that the standards we have are arbitrarily arrived at and opaquely applied by private companies whose primary allegiance is to making money rather than serving the public good, and who provide no basic due process for users to appeal suspensions or even find out what they allegedly did wrong.

Some progressives have excused tech companies de-platforming people we don’t like by adopting a basically libertarian definition of “free speech,” according to which only government censorship can violate it. The idea is that since tech platforms are privately owned, nothing they do can be a threat to “free speech” by definition. But this is far too narrow.

Imagine a President Alexandria Ocasio-Cortez tweeting encouragement to workers during a general strike and being accused by social media companies of ‘inciting’ any violence that took place on picket lines.

Think, for example, about the Hollywood blacklist in the 1950s. In a fit of anti-Communist paranoia, the Hollywood studios made a list of suspected Party members and fellow travelers and denied them employment. The effort to end the blacklist was a fight for the right for Hollywood workers to express controversial political ideas — even though the studios were private entities.

The reason to take a hard line against government censorship is that we care about things like the value of individual expression and the societal benefits of free and open discussion of controversial ideas. The same consideration should lead us to see free speech as at least one important value to be balanced against others in a variety of non-government contexts. And it should certainly lead us to be alarmed by the amount of control a few tech CEOs currently have over the flow of information in our society.

The anecdotes I started with about my own brushes with the tech censors are relatively trivial. But we’ve seen much more disturbing indications of how bad private sector tech censorship can get in the last few months.

When many liberals worried that New York Post revelations about Hunter Biden would swing the election to Donald Trump, Facebook and Twitter both stepped in to stop users from sharing the story. A common defense of the companies’ actions was that they were motivated not by the painfully obvious political concern but by the failure of the Post to live up to proper journalistic standards.

That’s difficult to take seriously under the circumstances. But even if it were true, the idea that Jack Dorsey and Mark Zuckerberg — corporate CEOs with no democratic accountability to the general public — should be empowered to decide which newspapers are journalistically responsible enough for all the millions of Facebook and Twitter users to be allowed to see is deeply disturbing.

Similarly, a case can be made that Donald Trump deserved to be removed from a variety of social media platforms after the events of January 6. But whatever you think of the outcome, it’s astonishing that the decision about cutting off major lines of communication from the most powerful elected official on the planet to the general public is in the hands of a few corporations.

Nor is it difficult to imagine circumstances under which the Left would rightly be outraged about a parallel decision. Imagine a President Alexandria Ocasio-Cortez tweeting encouragement to workers during a general strike and being accused by social media companies of “inciting” any violence that took place on picket lines.

Last week, a variety of socialist pages were removed from Facebook. The company later said this was due to an “automation error.” Maybe it was. On the other hand, Jacobin subscription appeals have been repeatedly banned from Facebook for months on the grounds that they constitute “political advertisements.” But the Wall Street Journal, for example, faces no similar restrictions.

If we aren’t currently the main targets of big tech censorship, that’s because they don’t take us sufficiently seriously as a threat to their economic interests.

In addition to principled considerations about free speech, a good reason for the Left to oppose tech censorship is that we should know perfectly well that the Silicon Valley plutocrats aren’t our friends. If we aren’t currently the main targets of the censors, that’s because they don’t take us sufficiently seriously as a threat to their economic interests.

As satisfying as it can be on a visceral level to see racists, fascists, and reactionaries de-platormed, the Left shouldn’t adopt the libertarian “only government censorship counts” definition or cede the issue of free speech to our ideological enemies. Instead, we should point out corporate censors are an enormous threat to free speech, particularly when they own our communications commons privately. And we actually offer solutions to this censorship.

For example, as Shaun Richman has advocated, we should push for aggressive new labor laws to protect workers against being fired for speaking out against the boss. And we should advocate bringing massive tech platforms into public ownership so that the protections of the First Amendment will apply on those platforms.

The lingering memory of the flawed Soviet model of state socialism has given many people the impression that capitalism and free speech go hand in hand. Nothing could be further from the truth. The heart of democratic socialism is an acknowledgment that private sector authoritarianism can be as much of a threat to meaningful freedom and equality as authoritarian government policies. That’s why we want to extend democracy into the workplace. And that’s why we want to extend the fight for free speech into the private sector.