American liberalism has a distinctly contradictory relationship with black protest. On the one hand, liberals imagine themselves the best friends (in contemporary parlance, “allies”) of the cause of black equality. On the other, since at least the 1930s, liberals have recoiled from black militancy, convinced it served little purpose but to strengthen the hand of reactionaries.

With uprisings now shaking cities across the country, American liberalism’s divided mind has been revealed once again. Some of the attempts to maintain the balance of supporting the cause while condemning the uprisings have been laughable, like the ridiculously paternalistic idea that the property destruction is all the doing of “white anarchists.” Aside from being a regurgitation of police rationalizations for repression, this kind of argument effectively erases the many forms of black protest that don’t fit the model for liberal approval.

More sophisticated thinkers have found subtler means to express their discomfort with the uprisings, arguing that riots, no matter how justified, only empower reactionaries. These types are in luck, as a new paper, from political scientist Omar Wasow, was published just the other week arguing that the riots in the 1960s scared white voters and swung them toward Nixon.

Wasow’s paper is a rigorous piece of social science, and its conclusions don’t stand or fall based on their convenience for radicals. It’s entirely possible that the 1960s uprisings really did boost support for Nixon’s law-and-order campaign.

The paper got substantial attention this week, however, from those seeking to extend its conclusions well beyond their empirical foundation. Ross Douthat, the conservative New York Times writer who often articulates liberal nostrums best, used it to argue that liberals have “a special burden to forestall and contain” riots if they want to prevent broader political reaction.

Just two weeks ago, liberals were excoriating the Trump administration for reckless extrapolation. Yet that is exactly what they are doing now in asserting that the sixties proved rioting is always and everywhere counterproductive. The idea that riots might have different effects in different moments is a complexity they’d rather not contemplate.

Take the first Black Lives Matter (BLM) uprisings in 2014–15, centered in Ferguson, Missouri and Baltimore, Maryland. For Douthat, these uprisings torpedoed conservative enthusiasm for prison reform and ushered in Trump himself.

But there’s precious little evidence for this argument. In fact, public opinion data strongly suggest that these episodes contributed to more progressive racial ideas. For the last decade, the Pew Research Center has been asking people whether the country has done enough to ensure black-white equality, or whether it needs to do more. A look at their results makes the impact of BLM obvious. 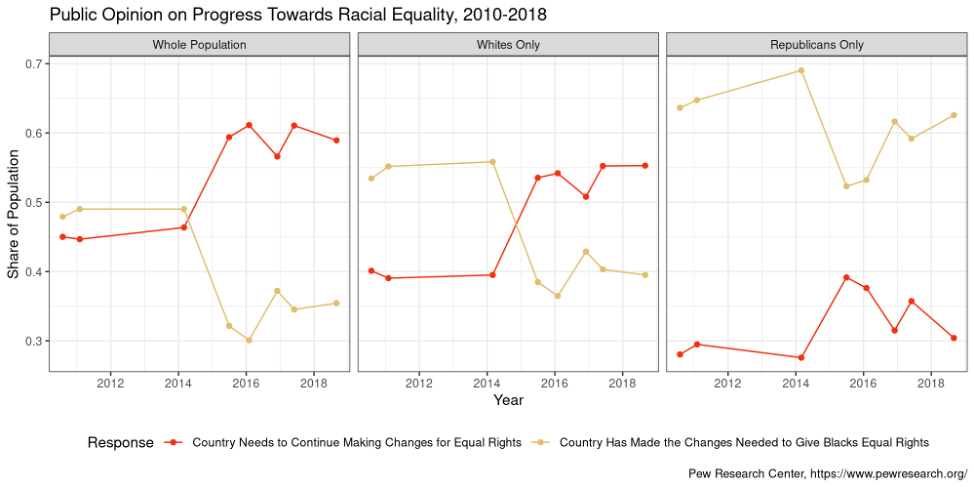 Among the population as a whole, 2014 to 2015 saw a huge jump in the share of people saying the country still needed to change to guarantee equal rights. The size of the jump barely diminishes if you only look at white Americans. Even among Republicans, there’s a very clear rise in the belief that more action is necessary for racial equality. (Among police officers, by contrast, over 80 percent think no further changes are necessary.) Other scholarly research has substantiated this impact more rigorously.

In the recent history of riots, Ferguson and Baltimore are not exceptional. There is plenty of evidence that riots have brought progressive change. One recent paper examined the aftermath of the Rodney King uprising and found that in Los Angeles, the riots boosted voter mobilization for Democrats and support for public schools.

In the UK, riots broke out in 1990 when Margaret Thatcher tried to impose an extraordinarily regressive poll tax on local services. Though the mainstream of the Labour Party condemned the riots as the work of “anarchists,” a campaign to defend those charged during the unrest sprang up and formed part of the general movement to resist the taxes. That bottom-up effort created a crisis for the Conservative Party that triggered Thatcher’s resignation and the repeal of the poll tax.

Even the case of the 1960s is more complicated than the liberal story about scared white Nixon voters suggests. For one thing, there is substantial evidence that the riots led to higher government expenditures in the deprived cities where they erupted. James W. Button’s pathbreaking 1978 book Black Violence documented the ways the riots forced policymakers to pay attention to the effects of their policies on the urban poor, a group they had been happy to neglect previously. At a time when many social scientists viewed even protest movements as a kind of mass psychosis, Button showed that riots were a rational response to being ignored.

Later research showed that riots could increase welfare expenditures, even in areas where white racism was strongest. In other words, even if riots pushed white public opinion in a conservative direction, they also brought important benefits to the areas where they occurred.

Though the political effects of riots are more complicated than liberal morality tales imply, there’s an important sense in which they are beside the point. After all, whatever their political effects, riots happen with some regularity in American cities. When people are dispossessed, when the disposability of their lives is visible every day in videos of them being killed by agents of the state, and when the political system completely ignores their plight, they will, sooner or later, attempt to force their problems onto the national stage by whatever means necessary.

As Cardi B said in a refreshingly blunt and honest video, “Seeing people looting, and going extremely outraged, you know, it makes me feel like yes! Finally! Finally, motherfuckers is gonna hear us now.” Though liberals like to talk a lot about the value of listening in moments like these, they’ve made it abundantly clear that they’d prefer not to.