Let it be said at once: the treatment received by Bernie Sanders in the leading media in the United States and in Europe is unjust and dangerous. Everywhere on the main networks and the large daily papers we read that Sanders is an “extremist” and that only a “centrist” candidate like Biden could triumph over Trump. This biased and somewhat unscrupulous treatment is particularly regrettable when a closer examination of the facts actually suggests that only a full-scale reorientation of the type proposed by Sanders would eventually rid American democracy of the inegalitarian practices which undermine it and deal with the electoral disaffection of the working classes. 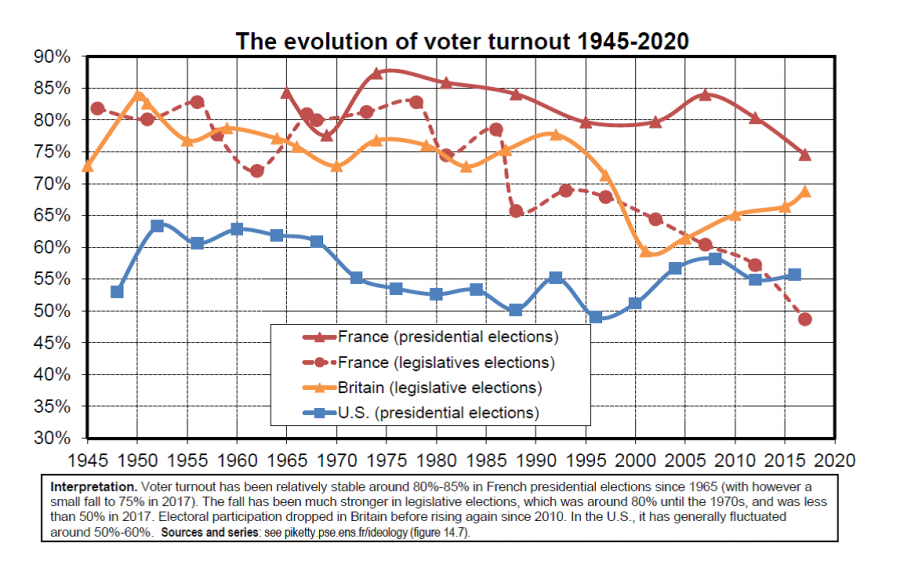 Let’s begin with the program. To say emphatically, as Sanders does, that a public, universal health insurance would enable the American population to be cared for more efficiently and more cheaply than the present private and extremely unequal system is not an “extremist” statement. It is on the contrary a declaration, perfectly well-documented by many research studies and international comparisons. In these difficult times when everyone deplores the rise of “fake news,” it is right and proper for some candidates to rely on established facts and not resort to obscure language and complex tactics.

Similarly, Sanders is right when he proposes large-scale public investment in favor of education and public universities. Historically the prosperity of the United States has relied in the twentieth century on the educational advance of the country over Europe and on a degree of equality in this field, and definitely not on the sacralisation of inequality and the unlimited accumulation of fortunes which Reagan wished to impose as an alternative model in the 1980s. The failure of this Reagan-style rupture is patent today with the growth of national income per capita being halved and an unprecedented rise in inequality. Sanders simply proposed a return to the sources of the country’s model for development: a very wide diffusion of education.

Sanders also proposes a considerable rise in the level of the minimum wage (a policy in which the United States were for a long time the world leaders) and to learn from the experiences in co-management and voting rights for employees on the Boards of Directors of firms implemented successfully in Germany and in Sweden for decades. Generally speaking, Sanders’ proposals show him to be a pragmatic social-democrat endeavouring to make the most of the experiences available and in no way a ‘radical’.  And when he chooses to go further than European social democracy, for example with his proposal for a federal wealth tax rising to 8% per annum on multi-billionaires, this corresponds to the reality of the excessive concentration of wealth in the United States and the fiscal and administrative capacities of the American federal state, which has already been demonstrated historically.

Now, let’s deal with the question of opinion polls. The problem of the repeated assertions that Biden would be better placed to beat Trump is that they have no objective factual basis. If we examine the existing data such as those compiled by RealClearPolitics.com, it is clear in all the national opinion polls that Sanders would beat Trump with the same differential as Biden. These polls are of course premature, but they are just as much for Biden as for Sanders. In several key States, we find that Sanders would come out ahead of Trump, for example in Pennsylvania and in Wisconsin.

If we analyse the surveys on the primaries which have just taken place, it appears clearly that Sanders mobilises the working-class electorate more than Biden. It is true that the latter attracts a considerable share of the Black vote, an inheritance of the Obama-Biden ticket. But Sanders mobilises the vast majority of the Latino vote and crushes Biden amongst the 18-29 years age group, as he does in the 30-44 years group. Above all, all the polls indicate that Sanders has the best scores amongst the underprivileged (annual incomes below 50,000$, no higher education qualification), whereas Biden, on the contrary, has the best scores amongst the most privileged (annual incomes above 100,000$, higher education diploma), whether it be white voters or those from minority backgrounds, independent of age.

Now it so happens that the highest potential for mobilization is among the most underprivileged social categories. Generally speaking, voter turnout has always been relatively low in the United States: just barely above 50 percent, whereas it has long been between 70-80 percent in France and in the United Kingdom, before falling recently. If we examine things in greater detail, we also find that on the other side of the Atlantic, there is a structurally lower participation amongst the poorest half of the voters, with a difference in the region of 15-20 percent with the richest half (a difference which has also begun to be visible in Europe since the 1990s, even if it remains less marked). 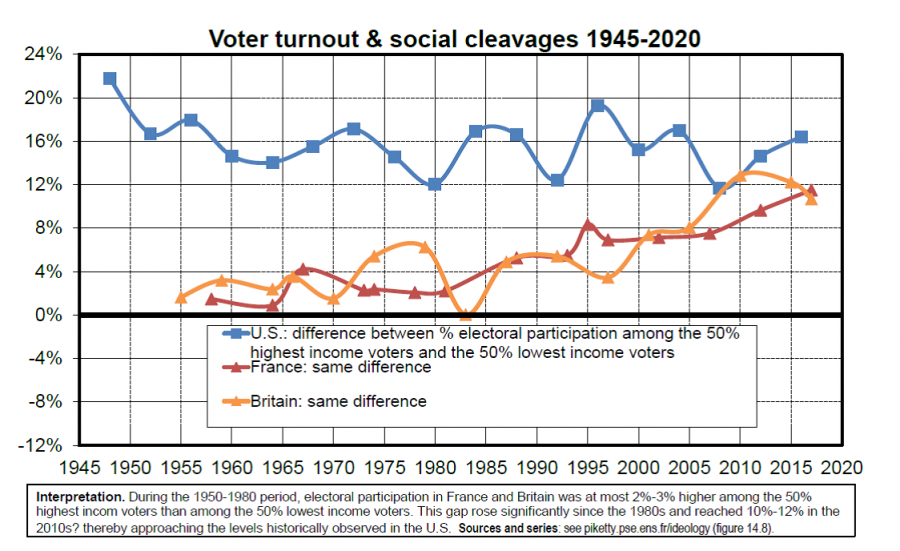 To put it clearly: this electoral alienation of the American working classes is so long-standing that it will certainly not be reversed in one day. But what else can we do to deal with it than to undertake a far-reaching reorientation of the election program of the Democratic Party and to discuss these ideas openly in national campaigns? The cynical, and unfortunately very commonplace vision among the Democratic elites, that nothing can be done to mobilize further the working-class vote, is extremely dangerous. In the last resort, this cynicism weakens the legitimacy of the democratic electoral system itself.