For years, despite much evidence to the contrary, establishment pundits and politicians have insisted that Bernie Sanders is unelectable. Last week, they got a gift: political scientists David Broockman and Joshua Kalla, writing in Vox, reported that their new study suggests Sanders’s electability could be a “mirage.”

The pair’s basic argument is that while Sanders might seem to have the best chance against Donald Trump, the polls in Sanders’s favor often fail to weight responses by the “likely electorate” — and, consequently, they underplay how much his electoral strength relies on getting younger voters to the polls. Sanders, the authors claim, would need an 11 percent turnout bump among voters thirty-five and under to do “as well” as the “more moderate candidates.” If they’re right, that would be a historic increase. It sounds daunting for Sanders supporters.

But how exactly did Broockman and Kalla reach this conclusion? Recognizing that stated intention to vote can be unreliable and that young people tend to turn out at very low rates, the scholars replaced participants’ stated intention with the actual turnout of those demographics in 2016. In addition, the authors took eligible voters who said they would go third party, were undecided, or would not vote and, if they were “leaning toward” one of the candidates, treated them as Democratic Party voters. After making these assumptions, Broockman and Kalla arrived at their result: “Sanders runs 0.6 to 3.9pp behind the moderates in terms of performance against Trump.”

The problems with this analysis are manifold. First, by handing disaffected and undecided voters to the candidate they are “leaning toward,” the scholars stack the deck for Donald Trump and candidates who are relatively more unknown and unpopular. For example, a Monmouth University poll last month reported that 26 percent of self-identified Democrats and independent-leaning Democrats either had no opinion of Pete Buttigieg or hadn’t heard of him; about 20 percent of self-identified Democrats and independent-leaning Democrats said the same thing about Michael Bloomberg. The numbers were even starker for “true independents” (those that don’t lean Democrat or Republican). A full 49 percent had no opinion or weren’t familiar with Pete Buttigieg, while 22 percent had no view of Mike Bloomberg (most knew his name because of his ubiquitous ads).

Adjusting for these groups is key to making an apples-to-apples comparison to Joe Biden and Sanders, who most people know and have an opinion about. Indeed, this seems to explain why, even with the adjustments that Broockman and Kalla made, Sanders’s performance is comparable to Biden’s. To believe the authors’ results about Bloomberg and Buttigieg, you’d have to believe that Biden is the least electable moderate. 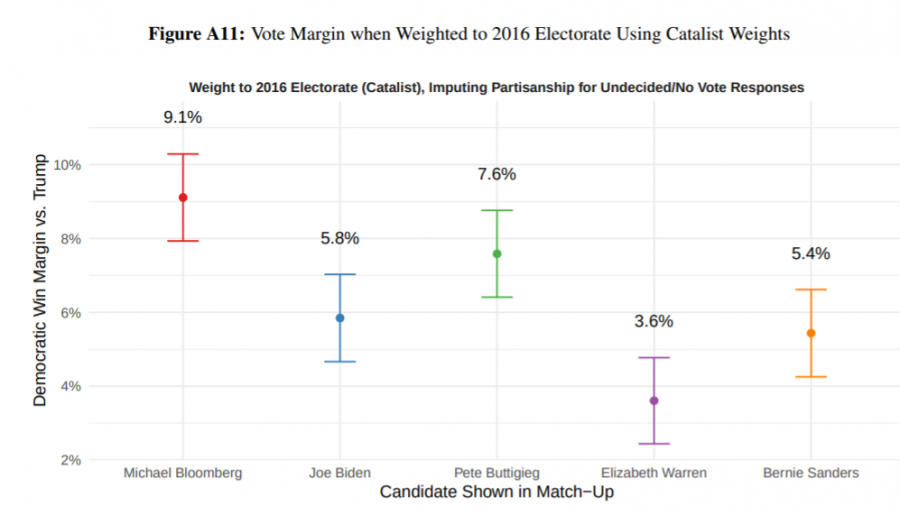 This point is all the more remarkable when you realize that Sanders is performing about the same as Joe Biden with the albatross of 2016 turnout tied around his neck. Turnout that year was depressed among black voters, and independents in swing states went overwhelmingly for Trump or third-party candidates. With merely 2012 racial turnout (not a particularly great year), Hillary Clinton would have been elected.

To understand just how much using 2016 turnout hurts Sanders, consider that the Vermont senator’s net favorability rating among Democratic-leaning independents was 48 points higher than Hillary Clinton’s in 2016. According to a Quinnipiac poll conducted last month, Sanders has mostly retained that level of favorability among Democratic-leaning independents, while gaining among self-identified Democrats. Critically, this national poll also replicates Sanders’s incredible performance among Latino voters so far this primary. Sanders’s net favorability among all (not just Democratic) Latino voters is 37 points; Biden has basically no net favorability, clocking in at below 1 point. Given the thin margins in multiple swing states in 2016, Sanders’s overwhelming support among Democratic-leaning independents overall, and Latino voters specifically, represents a powerful path to the White House.

It is important to remember that Hillary Clinton failed in swing states because she lost independents on a message designed to target “moderates” and “conservatives.” As political scientist Rachel Bitecofer writes in her book The Unprecedented 2016 Election:

The abject failure of the persuasion strategy to win over Independents in the 2016 election raises concerns regarding the strategy’s viability, at least in national elections . . . Given the high levels of partisan polarization in the American electorate, base mobilization strategies may be more effective than strategies that seek to expand a party’s appeal. Although persuasion politics isn’t dead, it is on life support. In the polarized era, it’s all about that base. 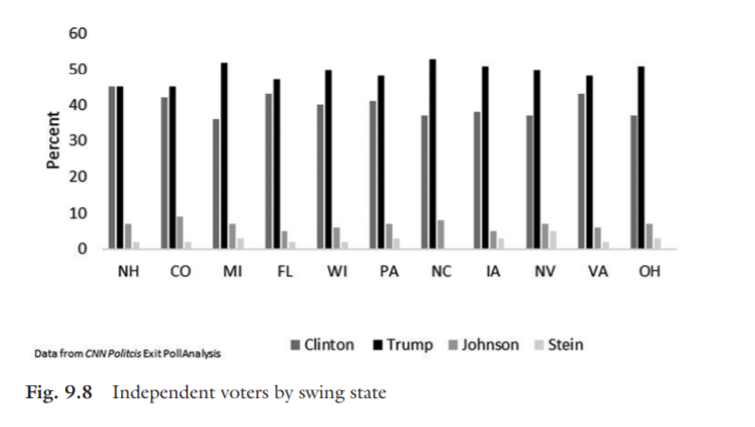 Since partisan loyalty is at a record high for self-identified Democrats and Republicans in general elections, the main demographic that can still be tapped is partisan-leaning independents. Independents that are partial toward one party usually don’t defect to the other party but instead stay home or vote third party. In other words, the criteria by which we should judge any Democratic presidential candidate’s electability is their popularity among Democratic-leaning independents and “true independents” in swing states. And by that metric, Sanders excels.

The most fundamental problem with Broockman and Kalla’s study is that it assumes candidates with wildly different levels of favorability among Democratic-leaning independents will benefit from the same levels of turnout. But Sanders isn’t just very popular with young voters — he’s very popular among Democratic-leaning independents. Contra Broockman and Kalla, he would not need a double-digit jump in youth turnout to prevail in November.

Broockman and Kalla are also wrong to suggest that Sanders and Biden are equally as well positioned to beat Trump. While Biden doesn’t have Clinton’s vulnerability among Democratic-leaning independents (at least not yet), Sanders performs better among “true” independents, and Biden has little shot of improving upon the expected turnout boosts from anti-Trump sentiment because of his weakness among younger people and Latino voters as well as his underwhelming field operation. There would be no equivalent to a South Carolina primary to save Biden in the general election — especially not if he’s repeating the same failed strategy as Hillary Clinton, which kept Democrats and Democratic-leaning independents unenthusiastic and disengaged.

To boost turnout from 2016, the Democratic Party nominee must build a multiracial, multigenerational coalition that energizes Democratic-leaning independents (and perhaps true independents as well). Sanders’s strategy is not a pie-in-the-sky leftist dream, but a straightforward, clear-eyed understanding of electoral math.

So while we need more evidence and data on the voting behavior of Democratic-leaning independents, the case against Sanders’s electability has not been made by Broockman and Kalla. In fact, when you look closely, it seems to have been strengthened. After all, Senator Sanders is himself a Democratic-leaning independent alienated by the Democratic Party’s swing to the right. He knows what these voters want — because he is one of them himself.