Elizabeth Warren released her Medicare for All financing plan today. The main purpose of the proposal appears to be to find a plan that you can message as “not increasing middle class taxes,” which is of course a nonsensical goal insofar, as Warren herself has said, what matters is middle-class health care costs, not whether you categorize those costs as premiums, taxes, or out-of-pocket expenses.

Nonetheless, bowing to the stupid media discourse on this, Warren put forward a financing proposal that is clearly unworkable and bad. The proposal is as follows:

To illustrate the difference, I have the following two graphs. 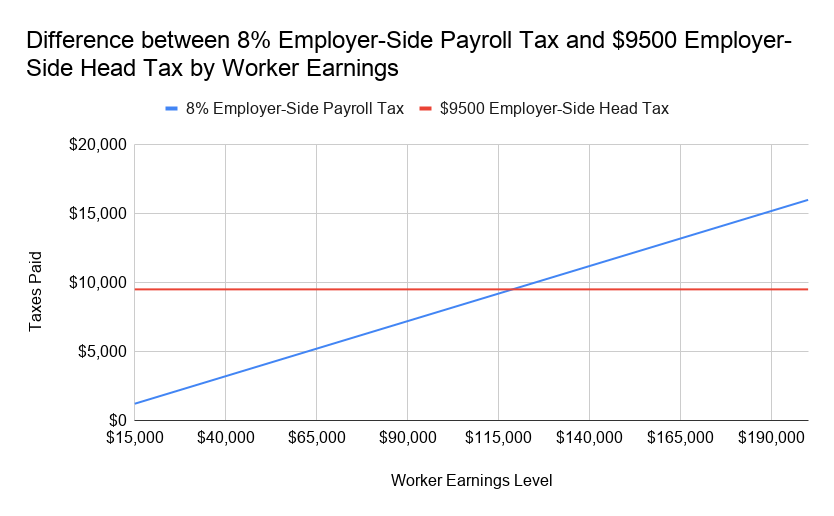 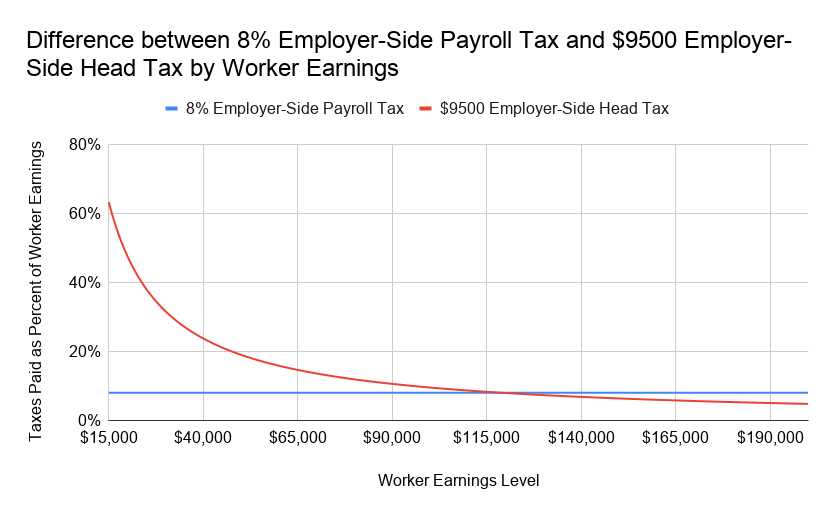 Elizabeth Warren’s team realizes this. The reason they are using the head tax is because they think they can trick journalists into declaring that this is not a tax, since it is expressed in dollar terms rather than percent terms. On first glance, this might seem like a stretch that probably won’t work. But it is a more plausible strategy once you consider that journalists are mostly very stupid and cannot evaluate policy claims on their own, relying instead on trusted sources and names (Warren being one of those names).

NEW: Elizabeth Warren finally reveals how she’d pay for Medicare for All.

Taxes on employers, corporations, 1% + revenue via war savings and immigration reform. Her advisers peg the cost at $20.5 trillion.

Separate from the distributive problems of Warren’s head tax, the two exclusions also make the proposal clearly unworkable and easily gamed. All companies have to do to avoid rather large head tax charges is spin off workers into independent contractor status or spin them off into firms with less than fifty employees that they then contract with for services.

Once some employers start doing this, the average Medicare employer contribution will have to go up to keep revenue stable, which will push even more employers to restructure their labor into independent contracting or outsourcing to small firms. And, at that point, the death spiral is off to the races.

The genius of the payroll tax, of course, is that it is unable to be evaded like this. Every dollar of labor income — even independent contractor income — is charged the same. No restructuring can save you from it.

While it’s clear that Warren’s permanent Medicare head tax is unworkable and bad, I do think a temporary head tax that transitioned into an employer-side payroll tax could work. To do this, you would start it off the same way Warren does by requiring every employer to pay 98 percent of their per-employee health care costs prior to Medicare for All (call this the maintenance-of-effort (MOE) payment). Then, for every subsequent year, you would phase in the payroll taxes by a couple percentage points a year, allowing employers to deduct that payroll tax from their MOE payment. After a few years of this, the payroll tax would get large enough to subsume the MOE payments, which will be eliminated.

I considered this approach when I was producing my own Medicare for All financing plan, and I think it is fine as a transitionary device, though I did not select it myself.