Consider the following facts as you wend your way through the Guggenheim Museum and its uppermost gallery, where you will presently find a painting called The Death of Michael Stewart (1983), Jean-Michael Basquiat’s gut-punching tribute to a slain artist, and the centerpiece for an exhibition that could hardly be more timely. Black people are three times more likely to be killed by police than white people. In 2014, fewer than one in three black people killed by police in the United States were suspected of a violent crime and allegedly armed. As American pediatrician Dr Benjamin Spock once observed, “Most middle-class whites have no idea what it feels like to be subjected to police who are routinely suspicious, rude, belligerent, and brutal.”

Such brutality is the focal point for “Basquiat’s ‘Defacement’: The Untold Story,” an exhibition curated by Chaédria LaBouvier that commences from a painting created by Jean-Michel Basquiat in honor of a young, black artist — Michael Stewart — who met his tragic end when he was supposedly caught by the New York City Transit Police tagging a wall in an East Village subway station during the early morning hours of September 15, 1983. Exactly what transpired that night remains unsettled to this day, but what is known is that the twenty-five-year-old Stewart was handcuffed, beaten, and strangulated by a choke hold with a nightstick — likely causing a massive brain hemorrhage, whereby he fell into a coma and never regained consciousness, dying two weeks later.

Other artists, among them Andy Warhol and Keith Haring, responded to Stewart’s death with commemorative works of their own, which are featured in the exhibition. Also included is a yellow flyer created by David Wojnarowicz — portraying the officers with vicious, skeletal faces — to announce a September 26, 1983, rally in Union Square in protest of Stewart’s “near-murder,” when the young man was still languishing in a coma, “suspended between life and death.” In fact, Basquiat must have seen Wojnarowicz’s poster (which was taped “all over” downtown, as another artist recalls), and apparently it served as a direct source for the composition of Basquiat’s painting.

The Death of Michael Stewart (informally known as Defacement) was originally painted directly onto the drywall of Haring’s Cable Building studio; it was later cut out of the wall and placed within an ornate gilded frame that Haring hung immediately above his bed. There the painting remained until Haring’s death from AIDS-related illness in February 1990.

Two positively ravenous officers — with pink flesh and blue uniforms — wield their nightsticks above a solitary, black, and haloed figure fixed motionlessly between them. In the upper register of the painting, above the trio of figures, is the word “¿DEFACEMENTO?” — a word that, during the 1980s, was often used as a term for graffiti. In the context of the painting, the artist draws our attention to the reality that what was truly being defaced was not a piece of property but a life: it is the police officers, teeth bared and thirsty for blood, who are committing the act of defacement, of disfigurement. Basquiat’s art was constantly in dialogue with the history of Western painting; and in this case, his work may in fact be seen as revisiting and restaging a classic theme — namely, the flagellation of Christ.

The exhibition includes several other works by Basquiat, dealing with closely related subjects that occupied him throughout his relatively short but intense and extraordinarily prolific career. Irony of a Negro Policeman (1981), La Hara (1981), and Untitled (Sheriff) (1981), all take up the themes of white power, authority and law enforcement — generally portraying the police as frightening and monstrous.

La Hara is an especially mesmerizing work, the title of which (repeated four times in the upper-left portion) refers to a Nuyorican/Boricuan slang term for a police officer — derived from “O’Hara,” since at one time a large contingent of New York City law enforcement was Irish. The officer in this work is downright scary: with a ghostly white complexion, bloodshot eyes, and crooked, menacing teeth, set within a jaw that is open wide enough for the figure to be talking to us — all of which serves to convey a kind of seething rage, ready to explode in violence at the slightest provocation.

As with many of his figures, Basquiat has painted this officer with his rib cage exposed, and in certain areas we can see right through him to the fire-engine-red background. In other words, what we have is a skeletal figure whose bleached white bones invoke a kind of living dead: not simply a monster but an abomination. 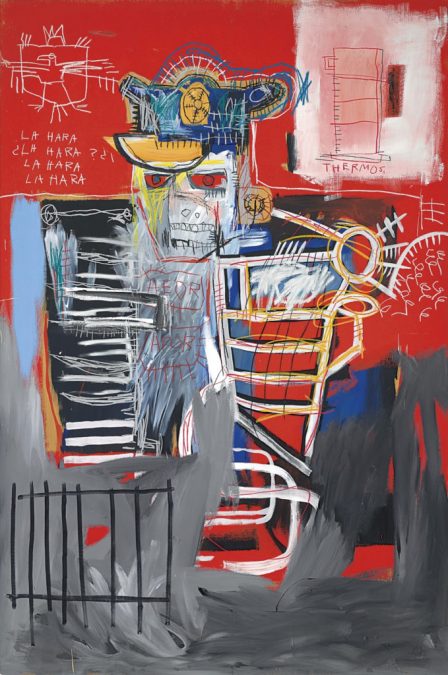 Charles the First (1982) and CPRKR (1982), both references to jazz saxophonist Charlie Parker, are among the paintings of Basquiat to champion and glorify the father of bebop — granting him, in fact, the stature of a king.

These two works, different as they are from Defacement, nevertheless share with it certain themes. At a basic level, all three works are concerned with death, and precisely the death of the young, black, male artist. CPRKR is a kind of grave marker for Parker, who was dead at thirty-five: a minimalist work consisting almost entirely of the initials in the title, references to the place (“THE STANHOPE HOTEL”) and the year of Charlie Parker’s death (“NINETEEN FIFTY FIVE”), along with a cross. At the bottom of the work, Basquiat has printed the name “CHARLES THE FIRST.”

Charles the First abounds with references to the life and work of the great musician; but two features are particularly notable in the present context: at the painting’s top left corner is the word “HALOES” — indicating that, in Basquiat’s scheme of things, Parker is also a kind of saint, one of a number of characteristics he shares with the Stewart of Defacement.

At the bottom of the painting, Basquiat issues the warning “MOST YOUNG KINGS GET THEIR HEADS CUT OFF” — which, at the very least, reminds us that, for Basquiat, a premature death is the price that the black artist pays for genius. Basquiat himself died in 1988 at the age of twenty-seven from a heroin overdose. 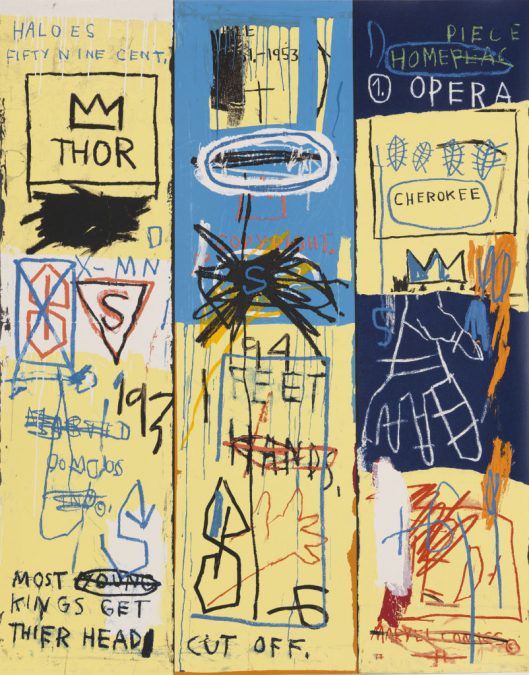 The Guggenheim’s glance back to 1983 and the death of Michael Stewart accomplishes what art exhibitions should, but all too rarely do — it grants us perspective on our present moment; a way of confronting the reality that we are currently living and navigating.

We all know the names of unarmed black men who recently had their lives cut short — Trayvon Martin (killed in 2012), Eric Garner (killed in 2014, by an illegal choke hold like the one that killed Stewart), twelve-year-old Tamir Rice (shot dead in 2014 by white police officer Timothy Loehmann), eighteen-year-old Michael Brown (also shot dead by white Ferguson police officer Darren Wilson), Philando Castile (killed in 2016 by a police officer) — and the list goes on.

The show does not allow us to forget that this violence has a long, painful history in America. Basquiat’s “ ‘Defacement’: The Untold Story” does what exhibitions should do: it tells us a story we don’t want to hear but need to hear.