Despite the voluble testimony of pundits and bar companions, the world of work is not one of Uber drivers and temp workers. In fact, the share of US employment accounted for by contingent and “alternative” arrangements is lower now than it was in 2005 and 1995.

That testimony is derived from several original sources. For example, a much-ballyhooed 2014 study commissioned by the Freelancers Union — which is not a materially disinterested party — reported that a third of workers are freelancers. The claim of a 2016 paper by Lawrence Katz and Alan Krueger that “all of the net employment growth in the US economy from 2005 to 2015 appears to have occurred in alternative work arrangements” was widely quoted and quickly became folk wisdom. That paper was based on an online survey conducted by the RAND Corporation. The survey was small — fewer than 4,000 respondents — and its sample wasn’t very representative of the overall population, a flaw the authors corrected through vigorous statistical handiwork.

Data released yesterday morning by the Bureau of Labor Statistics should put an end to this chatter. According to a special edition of their Current Population Survey, a monthly poll of 60,000 households conducted jointly with the Census Bureau, just 3.8% of workers were classed as contingent in May 2017, meaning they don’t expect their job to last a year. That’s down from 4.1% in 2005 and 4.9% in 1995. (Reports from the years before 2017 are here.) Tighter definitions show smaller shares, but also down from earlier years. In 2017, 96.2% of workers were non-contingent, compared with 95.1% twenty-two years earlier.

Same with age: workers under the age of 25 are less likely to be contingent than they were 22 years ago. Here’s the detail by demographic group. 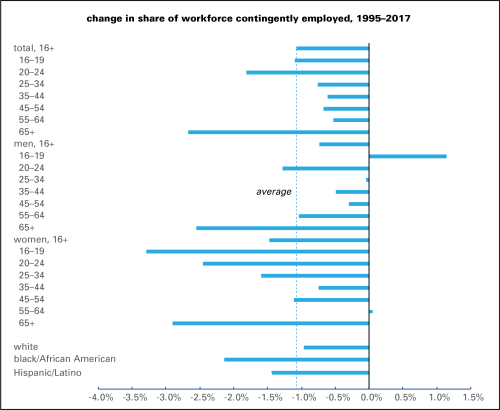 The share for workers in the 20–25 age group declined more than the average — especially women. The only groups to see an increase in share were teenage males and, barely, women aged 55–64.

Not all independent contractors are freelancers hanging on by a thread: 39% are in managerial or professional occupations, slightly less than their share of the overall workforce. These would include self-employed doctors or consultants. Reflecting that, independent contractors are more likely to be white and male than nonwhite non-men. Other forms of alternative arrangements show surprisingly little variation by race and gender; nonwhites are more likely to be temp workers, but there’s no gender gap at all. Almost all demographic groups show little change from 1995, and most of those changes are downward.

“Alternative” workers are better off. Full-time independent contractors make 96% as much as non-contingent full-timers; contract workers (heavily used in tech) make 22% more. Temp workers — 0.9% of the workforce — are much worse off, however, making 41% less than the traditionally employed. About three-quarters of independent contractors have employer-provided health insurance, but only two-thirds of temp workers do.

None of this is to argue that the world of work is a delight, or that young workers — or any workers except the professional/managerial elite — have a great thing going. But we should be clear about what the problems are. Precarity isn’t the major problem in the American labor market. It’s that wages are stagnant or worse, benefits are eroding, and much labor is dull, alienating, pointless, and sometimes dangerous. Many people with normal, full-time jobs have a hard time making ends meet, and most households have little or no savings to fall back on in a crisis. Emphasizing precarity only makes workers feel even more powerless than they are.