The following article is adapted from “Mass Incarceration: New Jim Crow, Class War, or Both,” a report out today from our friends at the People’s Policy Project.

There are two common explanations for this racial disparity in left-of-center thought. The first holds that mass incarceration exists primarily to control black people — a racist system that developed following the end of legal segregation and the successes of the Civil Rights Movement. Michelle Alexander lays out this view in her widely acclaimed book The New Jim Crow. The second account argues that mass incarceration exists primarily to manage the poor — a class-biased system that emerged as the welfare state was rolled back and neoliberal reforms took off. Cedric Johnson is one of the most prominent proponents of this view.

So which is it?

To try to answer this question, I constructed four different outcomes and tested their probability, drawing on data from the National Longitudinal Study of Adolescent to Adult Health (Add Health):

I assigned each survey participant a race based on self-identification and assigned a class based on their household income during adolescence, their current household income, their education, their current assets, and whether they own a home. From there, I ran logistic regressions for the four incarceration outcomes tracked by the Add Health dataset.

The findings are summarized in the four graphs below. 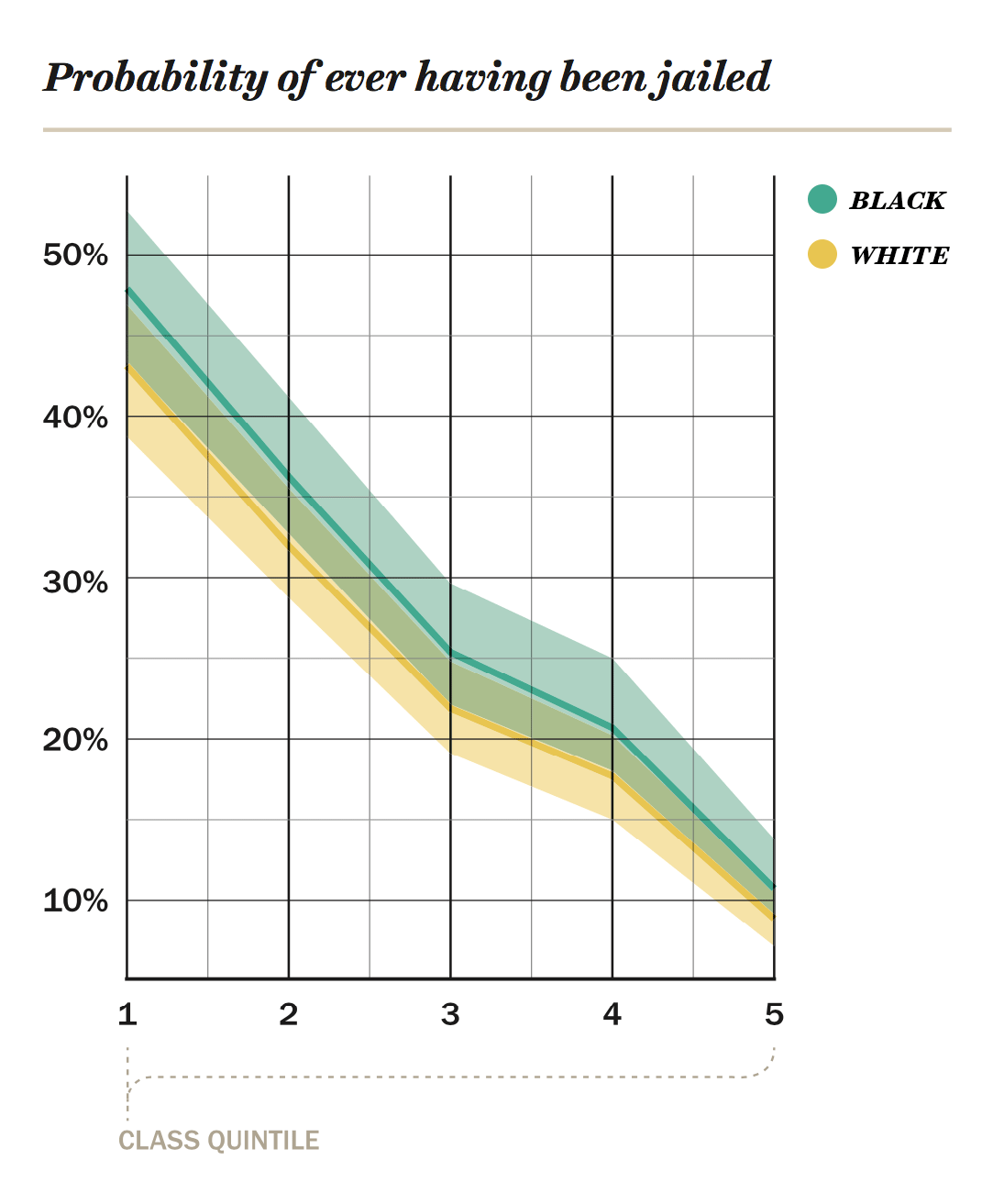 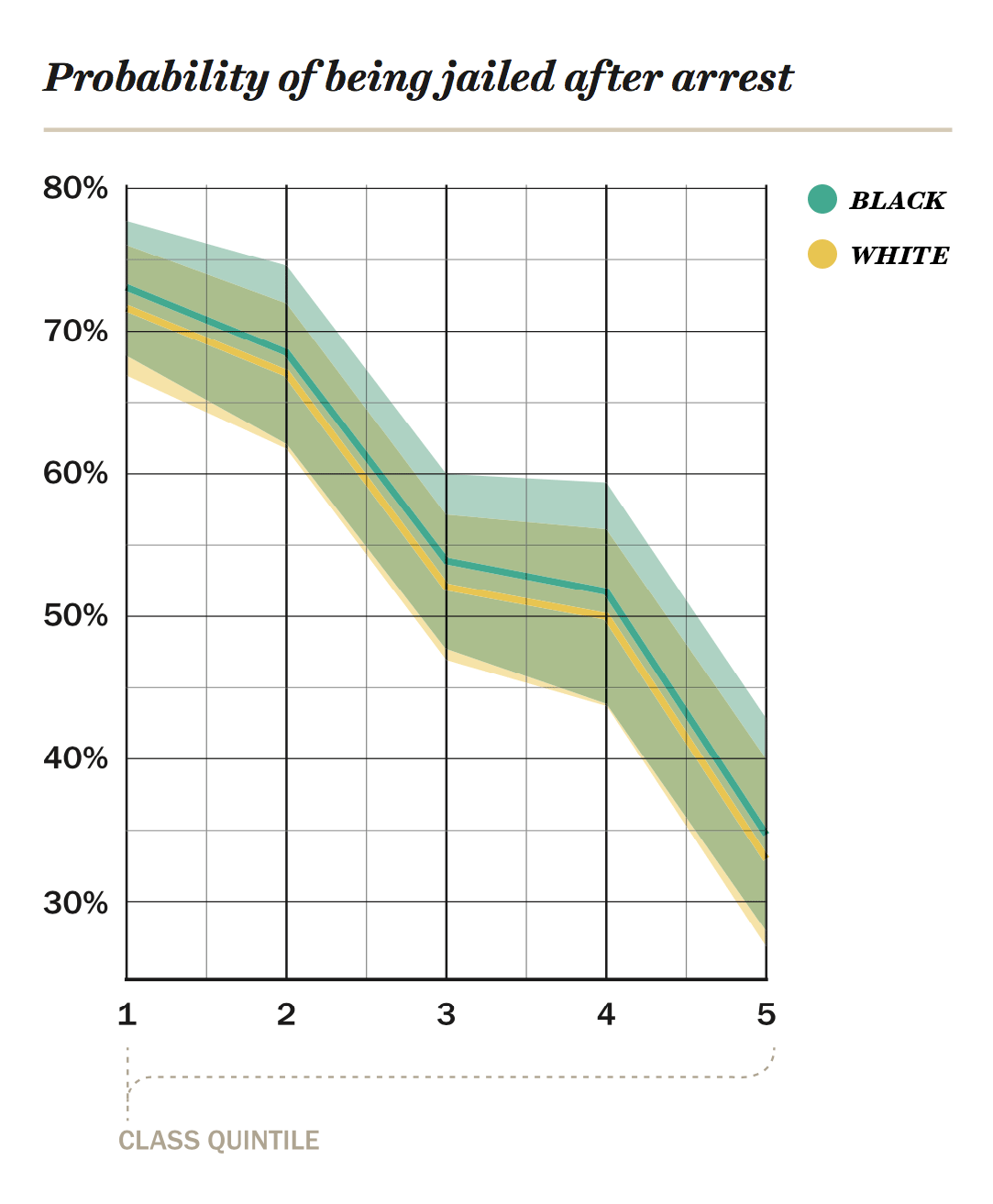 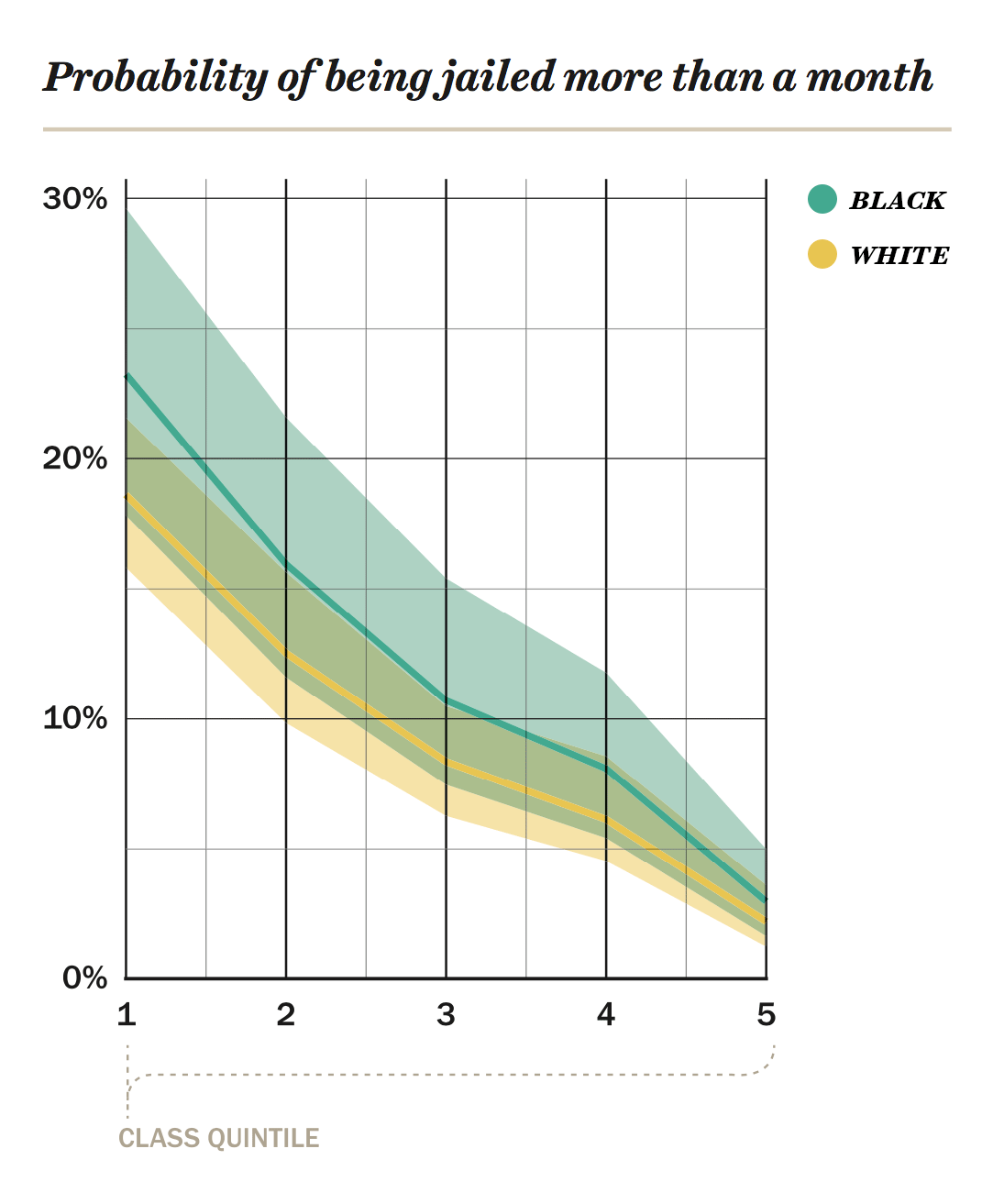 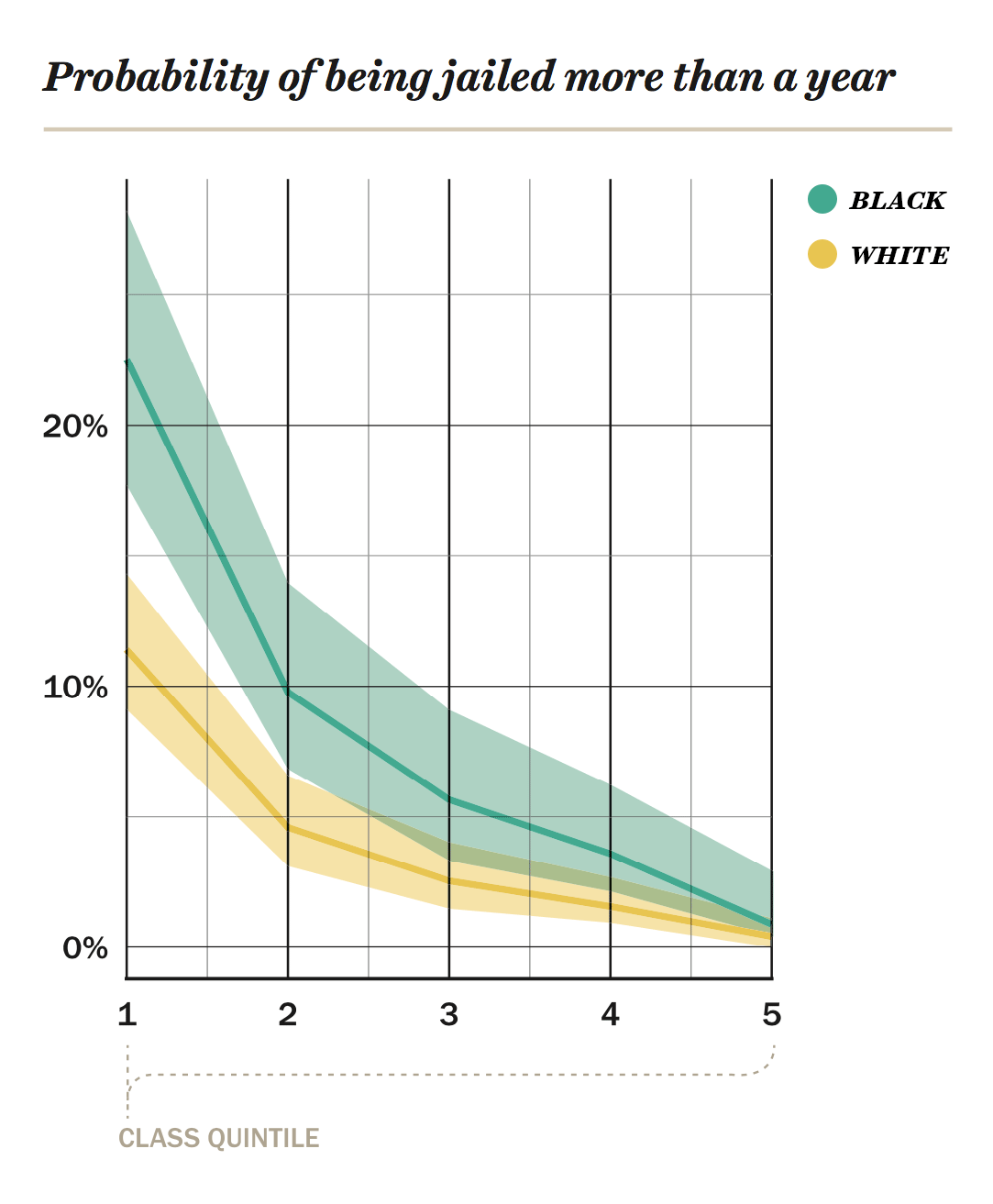 For all four outcomes, being lower class instead of middle or upper class makes a massive difference. Being black rather than white has a modest effect that is nonetheless statistically insignificant for all outcomes but one: the probability of being in jail or prison for more than a year. And even in that case, whites in the lowest class group are more likely to be locked up than blacks in the second-to-lowest class group.

In short, the primary reason why there is such a big gap in black and white incarceration rates appears to be the differences in the class composition of each racial group. Blacks are poorer, so the carceral state swallows them up at a greater pace. 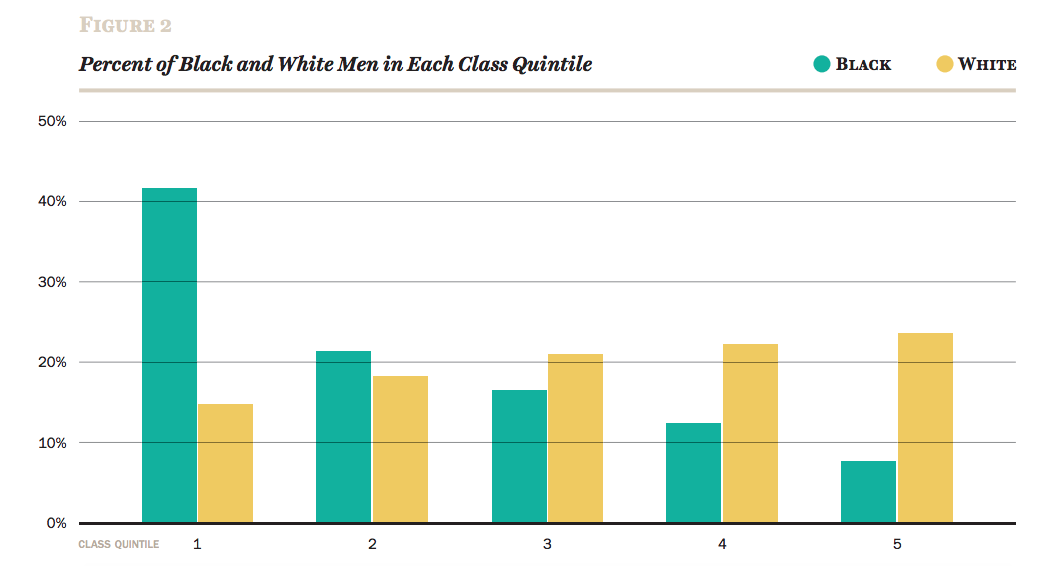 To see how much class affects the racial disparity for each incarceration outcome, I constructed a counterfactual that eliminates the class differences among white and black men. I did this by changing the bars in Figure 2 so that 20 percent of black and white men were in each of the five class groups, all else being equal.

Figure 3 shows the results: the overall black-white gap is anywhere between 53.7 and 84.8 percent depending on the incarceration outcome being tested. 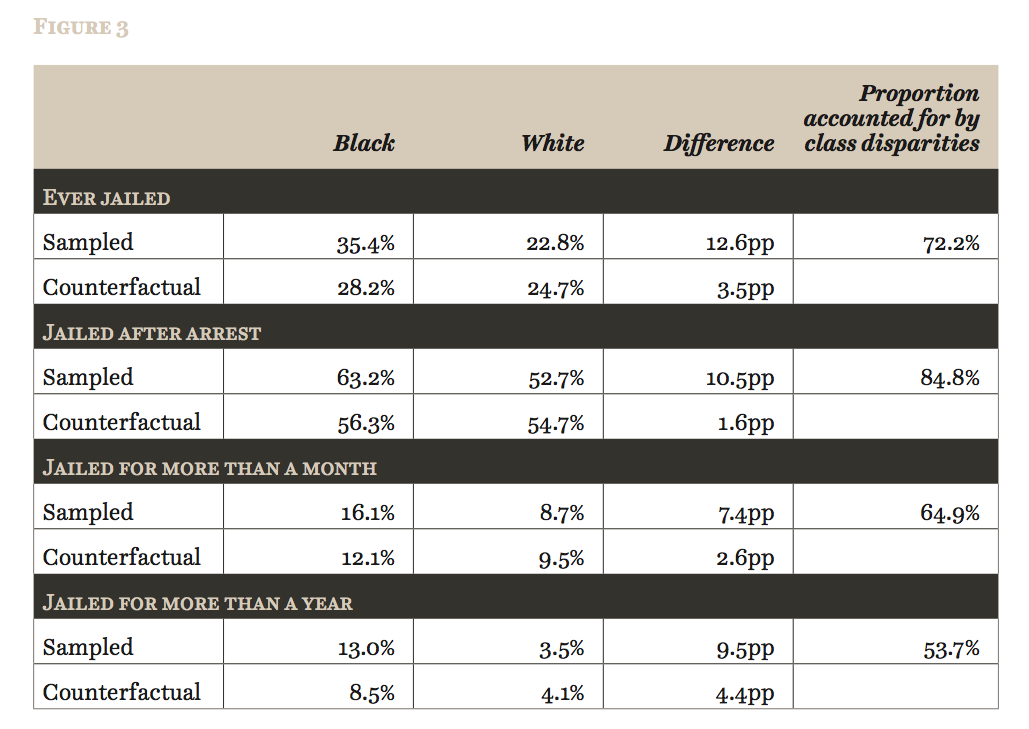 The Dynamics of Incarceration

Overall, my findings support the view of Cedric Johnson and others that mass incarceration in the US is principally a system of locking up lower-class men. Black men end up behind bars at a greater clip because they are far more likely to be lower class than white men.

Understanding the dynamics of incarceration is important for policymakers and activists who want to roll back the American carceral state. While racial discrimination and bias are clearly present in various aspects of the criminal justice system, eliminating that bias will not close the racial chasm. An effective remedy must target the country’s racialized class system, which is at the root of the problem. And that means pushing an egalitarian economic program that attacks the enormous disparities between classes.