Our mentors are dying.

At one level, this is a banal statement — an inevitable consequence of the forward march of time. But for those of us on the Left, there are historical and political factors that give it additional weight.

One consequence of the past several decades of defeat and demoralization for the Left has been a lack of generational replacement of leftist leadership and mentorship. Not only have there been fewer people available to serve as potential new leaders and mentors, but those of us who came of age politically between the 1980s and 2000s have had fewer and smaller movements upon which we could cut our teeth and develop as leaders and mentors ourselves.

As a result, it has fallen to veterans of the movements of the 1960s and ’70s to carry much of the weight of keeping the Left alive through difficult decades. That means that, as these veterans inevitably pass from the stage, the loss is that much more painful, their absence that much more deeply felt.

While we can appreciate this sociological observation about generational replacement at an intellectual level, it doesn’t change the fact that each individual death still feels like a gut punch. Knowing the history and sociology does little to soften the blow.

That is certainly the case when speaking of a figure of the caliber of Mike Davis, who died on October 25 at age seventy-six. We all knew this moment was coming after learning that he shifted to palliative care for his cancer a few months ago. But that didn’t prepare us for living in a world deprived of his prolific and penetrating insights.

Reading the tributes and remembrances that have flowed in over the past few days, it is hard not to be awed by the scale and scope of his reach. There is of course his immense body of writing, in which he managed to speak with authority, clarity, and insight on a dizzyingly vast array of matters without slipping into dilettantism.

From droughts and pandemics to urban development and resistance to labor history and politics, socialist strategy, and so much more, few others combined his careful research, clear-eyed analysis, political commitment, and eerie clairvoyance, all wrapped in dense yet riveting prose.

It won him a devoted readership across wide swaths of the US and global left, while also commanding respect in some of the halls of academia and the more mainstream public sphere. Few other thinkers occupy such a central place in graduate seminar syllabi and socialist reading groups while also being influential enough to attract the attention of the MacArthur Foundation and the ire of real-estate developers, along with attempts at exposés from the Los Angeles Times, Salon, and the Economist, among others. (The Los Angeles Times, for its part, shifted to more appreciative profiles of Davis later on).

On its own, Davis’s writing would be more than enough to be remembered as a giant of the Left. But he combined this with a lifetime of activism, organizing, and engagement, from his early years organizing with Students for a Democratic Society to participating in wildcat strikes as a truck driver and meatpacker to mentoring new generations of socialists in recent years. He was also generous as an academic mentor, taking the time to read, comment, and inquire about the work of graduate students and junior scholars just finding their way. Again, I am hard pressed to think of others who combined these qualities to the degree that Davis did.

Unfortunately, I cannot add any personal remembrances of Davis to this piece, as I never had the good fortune of meeting him myself, though I have long been in his orbit. I was first exposed to him as an undergraduate at Oberlin College, where politics professor Chris Howell kept a copy of Prisoners of the American Dream on reserve at the library for his students. Later, when I went to work for Teamsters for a Democratic Union (TDU), Davis’s writings on labor and the Left became a critical part of my political education, which I read alongside those of Kim Moody, Mike Parker, Jane Slaughter, Bob Brenner, and others.

When I made the transition from labor organizer to labor scholar, Davis stayed with me. I assigned his work in my social movements class and my seminar on “Capitalism, Socialism, and Democracy.” This ensured that I would have the privilege of revisiting and reengaging with his writing year after year. I never ceased to be amazed at the new insights I gleaned from each additional rereading and new ideas that would come to me after sitting with his work.

It reinforced for me not just how insightful Davis was as a thinker but how generative he was. He provided a jumping-off point for countless other scholars to take our own deep dives — even if we might never get as deep as he did.

Indeed, as I posted on social media back in 2018, as I was preparing to teach “Why the US Working Class is Different” in my seminar, “I’m amazed at how [Davis] can casually toss off ideas for about five dissertations in a single paragraph.” 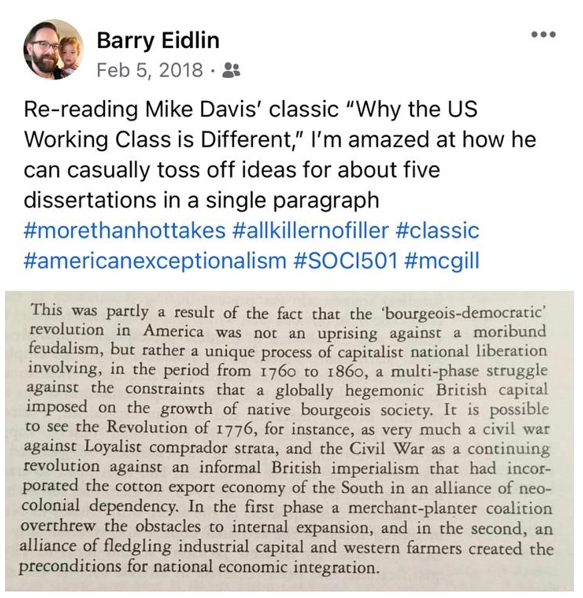 Many of my students had similar reactions to his work, consistently mentioning it as a highlight of the course. Likewise, for me, teaching his work has been a highlight of my life as a professor.

I did come very close to meeting Davis this past September. I had wanted to interview him about his time doing rank-and-file organizing as a Teamster and meatpacker in the 1970s for a book I’m working on with Jacobin editor Micah Uetricht about the Left’s “turn to industry” in that period, when members of socialist organizations took jobs in factories for organizing purposes. It’s a part of Davis’s life that was often mentioned in various profiles but rarely explored.

After I learned of his shift to palliative care, I figured that I had missed my opportunity, but seeing several profiles of him based on lengthy interviews published in the following months made me think that I might still have a chance. So I emailed him and was surprised to receive a reply almost immediately. He was happy to talk but could likely only handle an hour-long interview. We made plans for me to travel down to San Diego the following week, with the caveat that I should check with him the day before.

As scheduled, I wrote him the day before and received a reply: “I had a visit from my end-of-life physician this morning and she bluntly told me cancel all interviews or visits from friends. Apologies.”

While we had to cancel the visit, I was at least able to share with him how much his work influenced my own, how much my students get from reading him, and to thank him for his contributions toward building a better world.

Those contributions may now have come to an end, but they will live on in every student and organizer whose world will make a little more sense, and whose path to changing it will be a little clearer, thanks to Mike Davis.