With the emergence of yet another COVID-19 variant, there’s no end to the global pandemic in sight. It’s bad news for everyone who hoped that 2022 might bring about a return to some kind of normalcy, or see the end of the kinds of restrictions and punitive travel bans now being reintroduced. It’s decidedly good news, on the other hand, for a few big pharmaceutical companies who have already made a killing from vaccines and are set to reap big gains as variants like Omicron continue to proliferate.

Moderna and Pfizer have added billions to their market capitalizations in a matter of days since news of Omicron first broke amid an anticipated demand for booster shots and, by extension, huge profits. 2021 has already been a banner year for the various pharma companies who’ve successfully made their brands synonymous with the distribution of vaccines — Pfizer’s profits jumping some 124 percent in the first three quarters of the year when compared to 2020 and Johnson & Johnson’s some 24 percent. 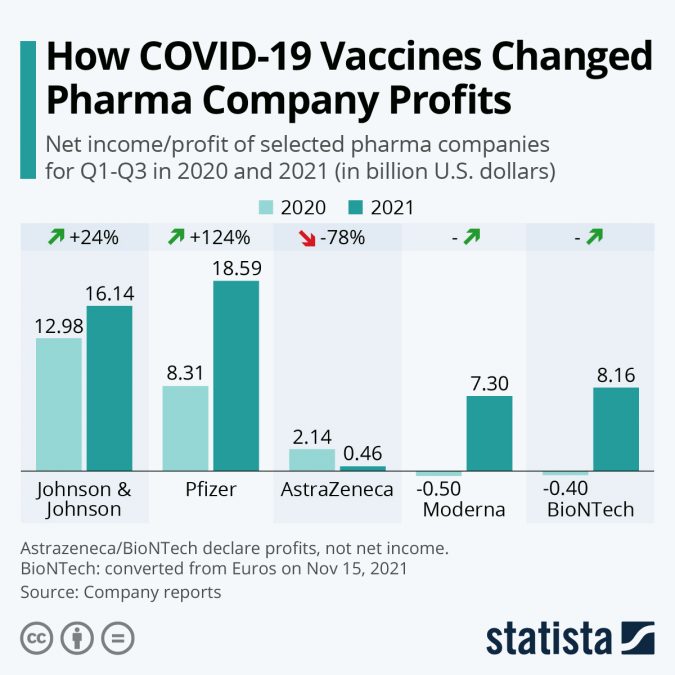 As lucrative business models go, Big Pharma’s pandemic strategy is about as good as it gets. The mRNA-type vaccines produced by the likes of Pfizer and Moderna were only developed thanks to billions in publicly funded research, and both companies paid well under the statutory US tax rate in the first half of this year. With the encouragement, protection, and cooperation of some of the world’s richest and most powerful states, both have also overwhelmingly sold shots within wealthy countries — successfully charging as much as twenty-four times the actual production costs according to one analysis by mRNA scientists at Imperial College London, resulting in doses five times more expensive than they need to be.

As an actual response to a global pandemic goes, the Big Pharma–led vaccine rollout has wrought a completely avoidable humanitarian crisis that’s quite rightly called vaccine apartheid by its critics. Breaking this corporate grip is a necessary step toward increasing vaccine supply and bringing urgently needed doses to billions who need them. But as the global news cycle concerns itself with the emergence of yet another variant, it’s also a basic prerequisite to ending the pandemic for everyone, even in rich countries with relatively high rates of vaccination.

Until vaccine production formulas are shared and doses made widely available at low cost, we can expect further unnecessary infections and deaths — and a hugely profitable industry continuing to make a killing from it all.