Goldman Sachs attracted a lot of attention with its forecast that the United States’s Gross Domestic Product (GDP) will be off 34% in the second quarter of this year. That is a very big number. It’s three-and-a-half times the worst quarter in US economic history since quarterly GDP stats began in 1947. (That quarter, by the way, was the first of 1958, the onset of a sharp recession, which featured, among other things, an “Asian flu.”) Here’s a little perspective on that number.

That 34% figure is annualized, meaning it’s what the total decline would amount to if the quarter’s rate were sustained for a full year. A 34% annualized decline works out to a 9.9% decline for the quarter alone. Big, but at least it’s not a third.

Unless you’re a connoisseur of these things, though, you probably don’t know that we never fully recovered from the 2008–9 recession. That point is made in the graph below. The line marked “trend” is based on the 2.1% average growth rate from 1970 to 2007, the year just before the Great Recession hit. The “actual” line is, as the name suggests, reported GDP per capita. The Goldman Sachs estimate for the second quarter is marked with the dot. If something like that forecast comes to pass, we will have undone the entire 2009–2019 recovery/expansion cycle in a matter of months. 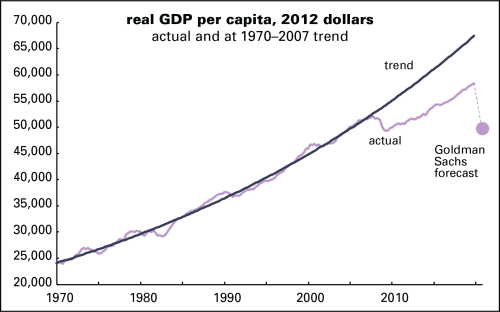 At the end of 2019, actual was 13% below trend. At the end of the 2008–9 recession, it was 9% below trend. Remarkably, despite a decade-long expansion, it fell further below trend in well over half the quarters since the Great Recession ended. The gap is now equal to $10,200 per person — a permanent loss of income, as economists say.

That doesn’t translate literally into a loss of $10,000 in personal income; there are a lot of other things in GDP, like investment. And gains in personal income have been concentrated in the upper brackets for several decades, so that doesn’t mean the average American is $10,000 poorer than they would be had the economy recovered normally after 2009. It does mean we have a lot less in the way of material resources than we should. And it suggests there were serious pathologies underlying a superficial and often strange “prosperity.”

That’s all gone now. Regardless of the exact number, we have almost certainly entered a very sharp downturn, one that could rival or exceed that of the early 1930s, though at a much faster tempo. We could experience in months what took three or four years to unfold after the 1929 stock market crash.

Goldman is expecting a rapid recovery later in the year. I find that hard to believe. A shock like COVID-19 isn’t easily recovered from. Even if we find our footing in two or three quarters, we’ll probably see another permanent income loss, unless we undergo some serious structural reforms.

Yes, GDP is a flawed measure of material wellbeing. It says nothing about what the economy produces, at what human and ecological cost, or how it’s distributed. But GDP is a useful shorthand for the principles around which our society is organized. This analysis helps explain why things have felt so unsatisfying despite cheerful economic headlines for the last five or seven years. And it’s only going to get worse, and probably a lot worse.