Hillary Clinton has won an overwhelming majority of black voters who have participated in the Democratic primaries: the Wall Street Journal places her share at 75.9 percent, and my math puts it at 77.9 percent. This is certainly a better showing than we’ve seen seen from Bernie Sanders, who has won support from about a quarter of black voters.

But on this basis, Clinton’s partisans have routinely concluded that their candidate has won some kind of democratic mandate from black Americans. While this is true in the trivial sense — she has won votes from a majority of those who actually voted — this framing overlooks the overwhelming majority of voting-age black Americans who either voted against Clinton or declined to vote at all. In fact, based on an analysis of exit polls, turnout numbers, and census data, an extraordinary 87.9 percent of voting-age black Americans have not voted for Clinton.

Voters, for obvious reasons, don’t report their race at the ballot box, and entrance and exit polling have only been conducted in about half of the fifty states. But those percentages, cross-referenced with turnout results and census reporting on voting-age black Americans in each state, paint a fairly telling picture: 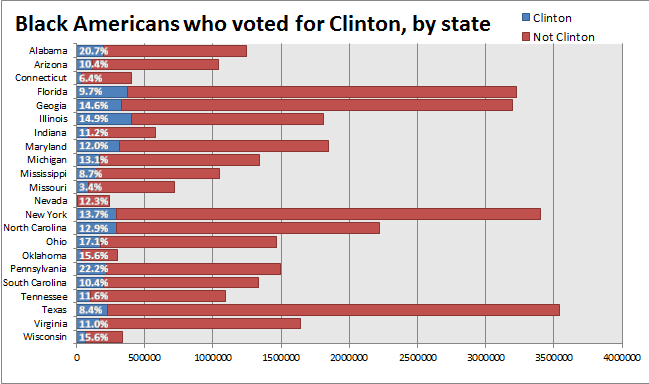 This is the most exhaustive and direct data we have on Clinton’s support among black Americans. On average, about 12.1 percent of them — accounting for around four million ballots — have voted for her and against Sanders. The other 29.4 million voting-age black Americans did neither.

The reasons for this are well understood: very few people vote in the primaries. For one, they are structured in a way that reduces turnout. Black Americans also report that they have little faith in the primary process — a majority (53 percent) think that “the outcome of the primary would have been very different if the [Democratic National Committee] had been more even-handed” (28 percent weren’t sure), and only 29 percent believe that “the current system of presidential primaries and caucuses . . . has generally . . . produced the best candidates for president.”

A landslide majority of black Americans (82 percent) plan to vote for the Democratic Party candidate no matter who it is. They also report having little faith in the government in general: a majority (58 percent) say that “the government is pretty much run by a few big interests looking out for themselves” (21 percent weren’t sure); a majority (52 percent) say that “most of the time” special interests are “able to get what they want by contributing money to political campaigns” (22 percent didn’t have an opinion); and a majority (57 percent) believe that politicians “lie to get elected” (6 percent were unsure).

Moreover, Pew reports that only 41 percent of black Americans believe “that voting gives people some say in how government runs things and that ordinary citizens can do a lot to influence the government in Washington.”

Another potential explanation for low turnout is that neither Sanders nor Clinton sufficiently addressed the issues that are important to many black voters. If this is true, then it seems clear that both candidates should have proposed a more ambitious agenda on Social Security, health care, the economy, education, and gun control — the five issues that black Americans tend to rank as “most important.”

Regardless, all of this should put Clinton’s relationship with black Americans in a very different light. If a majority or even a plurality voted for her in the primaries, it might make sense to argue that this indicates some kind of significant mandate. As it stands, only a tiny handful of black Americans are voting either way.

Again, this could say more about things like barriers to participation in the primaries than it says about what black Americans want. But other polling suggests that, like most Americans, they simply have little confidence or interest in national politics — and that they potentially wanted even more than Sanders or Clinton were prepared to offer.