On Thursday, you stated the following about Bernie Sanders’s record on fighting for civil rights in the 1960s:

I never saw him. I never met him. I was chair of the Student Nonviolent Coordinating Committee for three years, from 1963 to 1966. I was involved with the sit-ins, the Freedom Rides, the March on Washington, the march from Selma to Montgomery and directed (the) voter education project for six years. But I met Hillary Clinton. I met President (Bill) Clinton.

I am going to ignore the fact that Hillary Clinton was a Goldwater Girl, or that you once stated to a Clinton biographer that, “[t]he first time I ever heard of Bill Clinton was the 1970s,” or that it has already been well-established that Sanders worked with the Congress for Racial Equality (CORE) at the University of Chicago in the 1960s. I am also going to leave aside the fact that every mention of Bill Clinton in your book Walking With The Wind described an instance that he opposed some policy that you cherished.

Instead, I am going to talk about another person that you never saw or met.

Dorothy Marie Boone-Anderson was born in Gates County, North Carolina in 1935 as one of seven children. She left formal schooling in the eighth grade to go into the fields and work to support her family.

Times were always hard for the Boones, and the lack of educational prospects for the family meant that times would always be hard. That was a legacy of a segregation that always kept black families at the edge of the American Dream; close enough to be eternally tortured by a success that was constantly visible yet always elusive. In early 1953, Dorothy became pregnant by a man named Douglas Washington Williams. Her son, Luther, would be born on September 21, 1953.

It was the birth of my father that spurred my grandmother into organizing within the Civil Rights Movement, determined that her children would never have to live in a world where economic and political opportunities were denied to them because of their race. She organized alongside Haywood Riddick at the Nansemond County SNCC and organizations like the Wilroy Civic League, which acted as a locus for social and political activity in their neighborhood.

As I am sure you know, it made sense for them to focus on integrating the public school system. My father went to Wilroy School, an elementary school that was built with $900 from the Rosenwald Fund. This fund, set up by Sears and Roebuck executive Julius Rosenwald, was necessary to ensure that black children received education in areas where the state refused to provide them. It stood as a testament to the disregard that the Commonwealth of Virginia showed to its most vulnerable populations.

The fight was long and hard, but in the fall of 1965, the Nansemond County School System finally integrated. The photo below shows my father (in the middle) and my grandmother (to his right) standing in front of Driver Elementary School, the first school in the county to be integrated. The 1970–71 school year, my father’s senior year, would finally see all schools in the county integrated. He would graduate from John F. Kennedy High School in Suffolk. 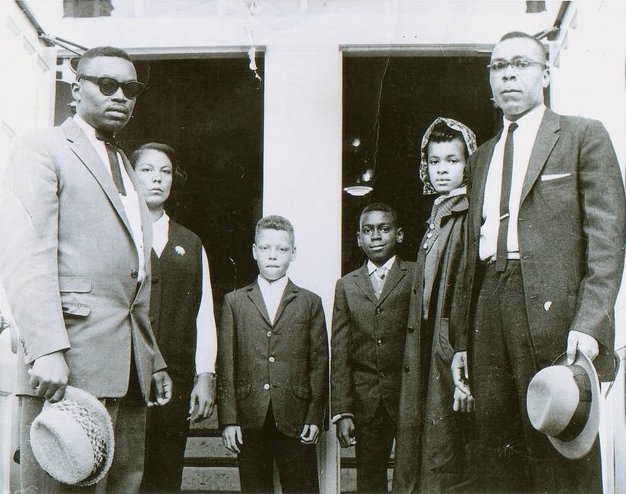 Presidential politics might be the backdrop for this story, Representative Lewis, but this has nothing to do with Bernie Sanders. The hurtful nature of your comments has to do with your erasure of the people who worked outside of the spotlight and the national press to make sure that the Civil Rights Movement touched every corner of black America.

The limited amount of freedom that we black Americans enjoy today is due in large part to the rallies organized, the meals cooked, the plans conceived, and the bravery shown by organizers whose names we will never know. Believe it or not, our freedom was not won by the Big Six alone.

The movement that you, my grandmother, Senator Sanders, and countless thousands were a part of was the largest grassroots movement for social, political, and economic change that this country has ever seen. It was a movement that was bigger than any one participant in it. A movement that, at its best, was unapologetically radical and driven by the black working class. We should live every moment in awe and praise of all of those people and not sweep them under the rug when it is politically expedient.

Hillary Clinton ain’t worth that. Not to me, and not to millions of others who owe everything to the Dorothy Marie Boone-Andersons of this world.