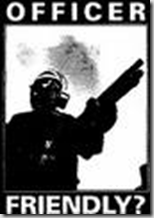 Recently on the Jacobin blog, Alex Hanna wrote some reflections on the relationship between Occupy movements and the police. He concludes with the provocative argument that the cops “can be the most ruthless, corrupt organizations, but they can be on our side. In the US, trying to battle them is often going to blow up in our faces.” This kind of argument always grates on me, maybe because I’m a child of the ’90s whose views on the cops were shaped by gangsta rap and crust punk. But it’s a form of hand-wringing that crops up all the time on the liberal-left, so I’m going to attempt to actually formulate a rational critique of what Hanna is saying. Although you can find a more complete theorization of why the cops aren’t your friend in this post by Richard Seymour, I’m just going to try to explain why the notion of getting cops “on our side” is such a problem from the perspective of radical mass movements. The main point is that police repression is a reality whether or not activists “provoke” it, intentionally or not, and recognizing that reality should change how we think about the relationship between protests and police.

Hanna’s post begins by blurring together two very different questions: whether mass protests should intentionally provoke violent conflict with the police, and whether movements should actively seek to maintain conciliatory and friendly relations with the police. The conflation occurs in the first two paragraphs. The opening refers to John Pike, the University of California Davis’s infamous pepper spray cop; the second paragraph asks, “what does provoking police actually accomplish towards the ends of Occupy?” Yet what made the pepper spray cop so shocking was precisely that his brutality was so clearly un-provoked. He casually inflicted agony on a line of seated demonstrators — and with copious photographic documentation, the university administration was left scrambling for the bizarre claim that peacefully disobeying a police instruction (i.e., civil disobedience) now constituted a form of violence.

Hanna uses a comparison between Egypt and Wisconsin to argue that activists must pay close attention to the legitimacy and institutional history of police forces, in order to determine whether confrontation will be effective. Given differences between police forces, “it’s a matter of tactics,” he says, “whether we choose to chant ‘Join us!’ at police or face them black bloc-style.” Not only does this reductively narrow the menu of possible approaches to police power, it inverts the whole problem we face as radicals. Hanna implies that the legitimacy of the police in the US calls into question the wisdom of confronting them. But recent conflicts over Occupy illustrate that this legitimacy is itself a prop for repression and a major obstacle to mass organizing, one which needs to be attacked directly.

After correctly noting that police repression and brutality were important factors in the pre-history of the Egyptian uprising against Mubarak, Hanna downplays the extent to which this was also true of Occupy. Part of this is due to his choice of example: using the Wisconsin anti-Walker protests as a case study in American policing is misleading at best, at least if it is meant to generate lessons for the Occupy movement. In Wisconsin, protesters dealt with an unusual and idiosyncratic mixture of capital police and state troopers; the most prominent occupations in New York and Oakland, in contrast, are dealing with some of the most arrogant and brutal examples of police power in urban America. Examples of the NYPD’s thuggishness and authoritarianism abound; these range from the almost comical sight of police boorishly defending their colleagues’ right to fix tickets, up to more malevolent behaviors like framing suspects and conducting pervasive surveillance of Muslims. And of course there is the long trail of Patrick Dorismonds, Abner Louimas, and Sean Bells, which calls into question just how clear the contrast is between the New York cops and their Egyptian counterparts. In Oakland, the parallel with the Egyptian revolution is even clearer: the crucial prelude to the eruption of Occupy Oakland was the protests over the police shooting of Oscar Grant while he was face down on a train platform.

Even granting all this, one could still accept Hanna’s argument that Occupy should avoid conflict with the police, in order to avoid offending the sensibilities of observers who are still inclined to give the cops the benefit of the doubt in any confrontation. After all, consider this scenario:

About 400 people were arrested and three police officers were injured after a weekend protest by members of the Occupy movement in Oakland, Calif., turned into a violent confrontation with law enforcement officers that led to an assault on City Hall.

The clashes began about 3 p.m. on Saturday when protesters marched toward the vacant Henry J. Kaiser Convention Center and began to tear down construction barricades, and the violence extended into early Sunday. The Oakland Police Department said in a statement that the crowd was ordered to disperse after protesters “began destroying construction equipment and fencing.”

Several hours later, some protesters broke into City Hall, the police said, although some of the demonstrators said they found the building’s door ajar. Mayor Jean Quan surveyed the damage there on Sunday, and the city administrator, Deanna J. Santana, said at a news conference that the protesters had broken a window and damaged a historic model of the building. Flags were stolen, she said, and one of them was burned in front of City Hall.

Surely this reflects badly on the protesters and hurts the movement, certainly in contrast to something like this:

The police kettled the marchers — contained them in one area with no way to leave — twice. The first time, they declared an unlawful assembly, but provided no escape route, and then shot tear gas into the crowd, sending people into a panic and forcing them to escape by tearing down fences around a lot, by the park, where they were contained.

Occupy [protestors] did not storm or attempt to take over the YMCA [as reported]. Employees there opened the doors for people begging to be saved from a kettle and mass arrest action where 300 to 400 people were taken down — including myself and other journalists. There are also several reports that Occupiers broke into city hall shortly thereafter. Property was definitely vandalized, but several people have told me they did not break in — that the doors were actually open.

The punchline, of course, is that these two passages are describing the same event, and in the second version it’s unclear what the protesters did to “provoke” anything. Some people might be inclined to give credence to the first version, which comes from the New York Times, over the second account from freelance journalist Susie Cagle. But as Aaron Bady points out, the Times and other mainstream outlets often lazily cobble together their stories by regurgitating the Oakland Police Department’s press releases. Cagle, meanwhile, is one of the few journalists who has been on the scene reporting on Occupy Oakland from the beginning, getting arrested twice for her efforts. But people who aren’t deeply involved in these movements aren’t likely to know that they should be reading Susie Cagle and not the New York Times. And so, if they’re willing to give the police the benefit of the doubt, they’ll likely go along with the Times story and shake their heads at those irresponsible and infantile protesters.

This is where Hanna’s argument unravels, once we correctly distinguish between not intentionally provoking the police, and actively trying to propitiate them. It’s backwards to regard the legitimacy enjoyed by the police as something that ought to motivate Occupy activists to avoid conflict with them. This is not to say that provoking fights with the cops should be a goal of protests — this, I agree, is generally a tactical mistake. But it is also a mistake to think conflict can always be avoided, if only protesters are perfectly polite and peaceful and obedient. Attempting to avoid such conflict at all costs leads to a cycle in which whatever protesters are doing is continually redefined as “violence” in order to justify crackdowns, even as activists themselves accept more and more restrictions on their freedom to act. Rather than fretting about the public relations consequences of the police attacks on Occupy, we need to fight back hard against the rhetoric that defines all resistance to power as impermissible violence, whether it’s UC Davis students sitting on the sidewalk or Palestinian kids throwing rocks at armored battalions of Israeli soldiers.

So long as the police — and more importantly, the politicians who control them — can define the limits of permissible protest and lie to the public with impunity, they are free to take whatever repressive measures they wish, all the while blaming everything on the actions of the protesters. The legitimacy of the police is a cause of police violence, and therefore the only way to ultimately reign in the cops is to tear away their veil of public support. It’s worth remembering that when the tide turned in the Egyptian revolution, it wasn’t because the cops stood down in the face of mass protests; it was because they were literally chased off the streets.

Delegitimizing police is one possible good outcome of the Occupy movements. My sense, at least from anecdotal evidence, is that some of the folks who participated in or observed the Occupy protests were genuinely shocked by the authoritarianism and brutality of the cops. Perhaps just as significant are the indications that the media, at least in New York, is starting to get tired of being pushed around by the police department. For me, it can be hard to avoid being a little blase about all this — although I’m a straight white male from an upper middle-class background, and thus not objectively a regular target, I did grow up going to urban public schools, alongside non-whites, poor kids, punks, skaters, and other undesirables. So I learned pretty early on the value of hating and fearing the cops. If Occupy can help teach that lesson to a bit more of white America, so much the better.